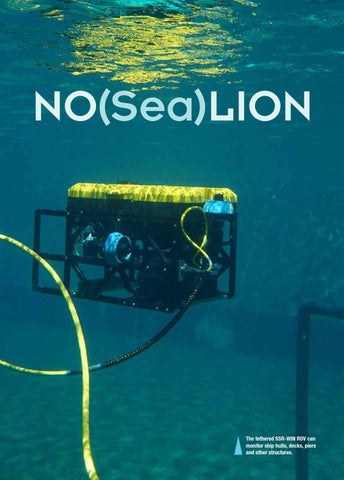 The tethered SSR-WIN ROV can monitor ship hulls, docks, piers and other structures. 34 |

The Department of Defense and the U.S. Navy would like to take their successful fight against land-based improvised explosive devices and be ready for underwater IED threats. The Navy would also like to use its divers more effectively and keep them out of harm’s way as much as possible. Lastly, it has to transition what its trained bottlenose dolphins and California sea lions can do — use their natural capabilities to intercept rogue swimmers and detect and mark sea mines — to mechanical systems. One way to accomplish all three goals is by using robotic technology both on the surface and beneath it, using remotely operated vehicles, surface vessels and underwater robots with arms to locate hazardous devices, neutralize them and even intercept combat swimmers. While this step is likely years away, recent demonstrations showed how it might be achieved. Three years ago, U.S. Central Command issued a joint urgent operational needs request to counter waterborne improvised explosive devices. The Chief of Naval Operations Expeditionary Warfare Division, or OPNAV, teamed with JIEDDO, the Joint Improvised Explosive Device Defeat Organization, to tackle these problems through three initiatives based at Space and Naval Warfare Systems Center Pacific (SSC-PAC) in San Diego. They broke the problem into three areas: long-range threat detec-

tion, closer range swimmer intervention, and the identification and neutralization of hazardous underwater devices. Those capabilities were then demonstrated last fall and this winter in two exercises that showed how they could work together. uuu

The long-range part of the work is handled by MCIBS, or Mobile Cueing with In-Volume and Bottom Search. Aimed at finding and tracking threats at long range, it uses an Autonomous Topographic LargeArea Survey (ATLAS) sonar developed at University of Texas Applied Research Labs and, in this case, is mounted underwater. The next step is STID, the Swimmer Threat Identification and Detection system, which can identify and track swimmers or other threats on the surface and in the middle of the water column. This part of the job is usually handled by sea lions or dolphins, which attach leg clamps (much like handcuffs) to errant swimmers to detain them. In this case, it’s an unmanned surface vehicle produced by SeaRobotics, of Stuart, Florida, that deploys a small ROV built by VideoRay, from Pottstown, Pennsylvania. These systems were all designed and demonstrated to be able to work together or by themselves as deployed systems. The final leg of the triad of systems is to precisely find and solve the threat that those rogue divers and combat swimmers carry, should they

get through existing defenses. SSR-WIN, or Sensor Stabilized Remotely-Operated-Vehicle Waterborne-IED Identification and Neutralization, demonstrated its ability to search for, find and disable the threatening hazardous devices. It’s a commercial, off-the-shelf ROV fitted with a robot arm and a variety of sensors with some really smart software that enables it to search on its own to find mines, explosives, or other underwater contraband and to tag or disarm it. In September 2014, officials from OPNAV and JIEDDO witnessed these demonstrations at San Diego’s 32nd Street Naval Station, hosted by the Office of Secretary of Defense Physical Security Enterprise and Analysis Group, or PSEAG. The event featured a mock scenario where the MCIBS detected a possible swimmer and STID, carrying the ROV, was dispatched to intercept. MCIBS is “just a far field detection, and its not a 100 percent ID,” says Steven Murphy of SSC-PAC, who was the assistant program manager for the waterborne IED program. “Even though we get a signature and we have a good idea what it is, we don’t have any visuals. It’s not high detail or anything. It’s just, yeah, you’ve got a bogey out there. And so the STID … then could actually run its USV out, deploy the arm, which would put the sonar on the ROV in the water column, reacquire the target, and, if necessary, deploy the OCTOBER 2015 | UNMANNED SYSTEMS

An artist’s conception of the SSR-WIN at work underwater.

ROV that had both the sonar and cameras on it to get very very close to do a full identification task on it.” This was a harbor protection demonstration, so SSR-WIN wasn’t used, but it was displayed at the PSEAG demonstration. SSR-WIN did get to show its capabilities in a demonstration held a few months later, Feb. 11-12, 2015, at Naval Base Point Loma. In that demonstration, there was a simulated attack by two active shooters and a suicide bomber, who detonated a mock bomb on the south submarine pier. SSR-WIN was used to evaluate the structural integrity of that pier, mostly operating autonomously to survey the mock damage underwater. Exelis, now part of Harris Corp., was the prime contractor for SSR-WIN, with Teledyne Benthos providing the ROV that integrated a three-fingered robotic arm from HDT Global’s offices in Fredericksburg, Virginia. HDT’s arm was originally designed as the DARPA Smart Arm for multiple uses. Previously, it was converted for use on land robots to help explosive ordnance disposal forces disarm or disrupt IEDs in Iraq and Afghanistan. For this program, they made it seaworthy. The software company SeeByte, from San Diego and Edinburgh, Scotland, operated the system and provided the ROV control, user in36 |

terface and automation software that tied all the systems together. “We had two years to put it all together and complete in-water demonstrations in a realistic, operational environment,” says Lauren Perrone, SeeByte’s systems engineer. “A challenging piece was integrating and operating the arm from an autonomous remote system.” The HDT DARPA arm was already resistant to dust and sand, having been used in the Middle East, but then it had to operate underwater, and accurately enough to either pick up or mark a target in very precise locations. The SSR-WIN system would be forward deployed to threat areas, and quickly dispatched if an official suspected there were a threat to a vessel or area, whether by seeing bubbles or receiving some intelligence. “Rather than sending divers to check it out, you would send this,” Perrone says. “It’s allowing the divers to be used more efficiently. Instead of burning their underwater time searching, they could deploy this system and then send the diver down with the right tools once the item is precisely identified and located.” As the Point Loma demonstration showed, the system can be used to search and inspect quay walls, piers, pilings, seafloor bottoms and other areas, not just ship hulls.

SSR-WIN also accompanied STID to take part in another demonstration in September 2015 at Naval Air Station Patuxent River, Maryland, where they showed their utility for countermine work. STID is a follow on to an earlier Office of Naval Research program called Reacquire, Identify and Localize Swimmers (RILS), which was intended to be a high-speed underwater vehicle that could find and trail swimmers which might pose a threat to ships in port. That design was initially based on a kayak; the much-improved prototype is a larger catamaran unmanned surface vehicle design from SeaRobotics, which is more stable and allows for the use of the VideoRay. The vehicle can run out at high speed and then enter search mode, using its sonar to search for divers. It can also lower the ROV to get a closer look at the threat and perhaps establish its intentions. For the Pax River demonstration, STID is now STID-N. It received an added payload to allow it to detonate mines, as well as a new name: the S now stands for submerged threat, and it has an N after its name to show its new capability for mine neutralization. uuu

All of the systems are likely to see military use in the near future in one form or another. In fact, ATLAS already is; it is deployed with the 5th Fleet on the MK 18 unmanned underwater vehicle and is under consideration for other programs as well. “That one’s already made the transition,” Murphy says. Some parts of the SSR-WIN program are likely to join the Navy’s

Mark 19 HULS program, or Hull Unmanned Underwater Vehicle Localization Systems, which is based on a Bluefin Robotics vehicle. “Some of the technologies that we’ve been developing are to be probably transitioned over to the HULS program: the supervisory control, maybe adding the arm to the MK 19 program in the future,” Murphy says. “The whole system might not get transitioned, but some of the technology might get incorporated into a program of record. That path right now looks to be the MK 19 program of record.” And with the Navy planning to phase out its marine mammal program, the STID program could pick up future work as well. The technol-

With SPAN® oN oEM625S, your truth iS AlWAyS ProtEctEd. Now there is another reason to depend on NovAtel precision for your truth. Our SPAN GNSS + INS technology is now available on all NovAtel SAASM receivers, assuring an even more robust continuous, 3D position, velocity and attitude solution. Protect your positioning accuracy with our SAASM-RTK OEM625S and FlexPak-S receivers now. novatel.com/defense