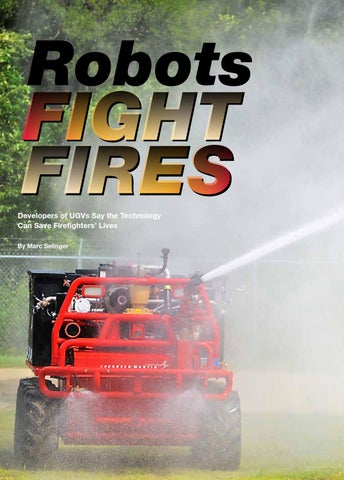 Robots Developers of UGVs Say the Technology Can Save Firefightersâ&#x20AC;&#x2122; Lives By Marc Selinger

When a burning fertilizer plant exploded near Waco, Texas, in April 2013, killing 15 people — most of them firefighters trying to battle the blaze — it underscored the unexpected dangers that first responders sometimes face. Several companies and other organizations are designing and building unmanned ground systems to help keep firefighters further away from such hazards in the future. These systems, which range from small to large vehicles to human-like robots, are in various stages of development. But they all are intended to keep firefighters at standoff distances from fires, reducing the likelihood they will be overcome by unstable conditions, such as the kind of sudden change in wind direction that caused a wildfire to trap and kill 19 firefighters in June 2013 near Yarnell, Arizona. “Broadly applied, some of the best roles for robotics are where the job is dull, dirty or dangerous,” says Myron Mills, who manages an unmanned vehicle program for Lockheed Martin. “Firefighting is certainly dirty and dangerous. We’d like to see unmanned systems technology used to help keep our first responders out of harm’s way while they perform their life-saving, property-saving missions.”

Howe and Howe Technologies of Waterboro, Maine, has developed Thermite, which places a firefighting apparatus atop the company’s RS-1 or RS-2 base robotic system. Thermite, which is operated with a handheld device that includes a video monitor on top, delivers up to 600 gallons of water or foam a minute and is remotely controlled from a distance of up to a quarter mile. It is about six feet long, 3.5 feet wide and 4.5 feet high and weighs 1,640 pounds. The company has sold a hand-

ful of Thermites to fire departments in foreign countries, including China, says Geoffrey Howe, the company’s cofounder and chief executive officer. Howe declined to give an exact number but said it is “more than five, less than 10.” “I just got a message from one of my clients that the Thermite was on the scene of a massive oil fire scene and was integrated into extinguishing that fire, I believe at an oil refinery,” Howe says. “So we’re seeing real-world usage at this point.” In 2012 demonstrations, Thermite doused buildings and storage tanks at the Massachusetts Firefighting Academy and a mock fuselage at the Portland International Airport in Maine. Science Applications International Corp., which assessed the Massachusetts event for the U.S. Department of Homeland Security, wrote in a report that test participants found the system “easy to operate, extremely rugged, durable and field repairable” and “indicated the firefighting community would benefit from the technology.” But Howe and Howe Technologies has struggled to find paying U.S. customers for Thermite. A key obstacle is that some American firefighters fear the system would take their jobs. Howe insisted that Thermite, which typically pumps water from a fire engine, is simply an extension of the fire truck and will not make anyone unemployed. “Our robots don’t replace any jobs,” he said. “They’re simply a tool in the belt you can use.” Thermite’s price tag is another concern for some potential users. Participants in the Massachusetts test questioned whether individual fire departments could buy the system, which Howe said costs “a couple hundred thousand dollars a pop.” They SEPTEMBER 2015 | UNMANNED SYSTEMS

company developed for military use, including transporting battle gear. The 14-foot-long, 7,000-pound Fire Ox carries its own supply of water and foam and can also take in water from a pond, stream, swimming pool, water truck or hydrant. “The idea behind the Fire Ox concept vehicle is to provide a very terrain-capable UGV with large payload capacity to go with firefighters and other first responders into austere areas that may be difficult to reach with other types of vehicles, to carry the burden of equipment for them and to be sent into areas that might be too dangerous for close human contact,” says Mills, the company’s SMSS program manager. “Additionally, there may be instances where the Fire Ox could be a force multiplier, allowing firefighters to do more with fewer people. Examples would be using road sprays to autonomously wet down fire breaks and ground vegetation, automated resupply of firefighters, pulling hoses and repeatedly delivering water.”

Lockheed Martin demonstrated Fire Ox last fall at the Texas Interagency Wildfire & Incident Management Academy at Camp Swift, Texas. It is now looking at ways to improve the vehicle, which is likely a few years away from becoming operational.

Lockheed Martin’s Fire Ox is a variant of a military unmanned ground vehicle.

suggested that the system may be more affordable as a “regional resource,” SAIC wrote. Smaller UGVs have also been looked at as firefighting systems. Three years ago, for instance, iRobot’s 500-pound 710 Kobra robot, was used in a proof-of-concept test against a car fire in San Luis Obispo, California. The robot, equipped with a hose on top, drenched a car engulfed in flames. The hose was connected to a fire truck that was parked well behind the robot. 36 |

“The project helped iRobot confirm that a remote firefighting turret could be successfully mounted onto a 710 chassis and deployed for operation,” says Tom Phelps, director of robotic products for iRobot’s Defense and Security business unit. uuu

“A good deal of the technology is mature enough today to go operational right now,” Mills says. “However, we need to ensure it is packaged into a system that it is affordable, reliable and maintainable for customer use. Because this is an experimental vehicle, some of the technology is still not fully mature. So there is a balancing process of cost versus availability versus capability that still presents itself as a challenge.” DOK-ING, a Croatian firm that builds landmine-clearing equipment, has begun selling the MFV-5, a 14-

ton, 17.5-foot-long robotic system that can carry more than 580 gallons of water and 130 gallons of foam as well as connect to external sources of such liquids. It is equipped with a fire extinguishing system made by German fire truck manufacturer Ziegler. It also has a rotational gripper and a cutting/claw tool to lift and cut through obstacles. Gordan Pešić, DOK-ING program director, says the MVF-5 is highly survivable because it uses technology designed to withstand exploding mines. “With its low center of gravity combined with its powerful engine and compact original structure, the MVF-5 entails excellent maneuverability,” he adds. The company has delivered about 20 units to army and civil defense organizations in Russia, Serbia and Turkey, and it hopes to have up to 70 systems fielded globally by 2019, Pešić says. DOK-ING is pursuing technological improvements to MFV-5, including integrating “artificial intelligence features.”

Some firefighting robots look and act more like people than vehicles. Virginia Tech is developing firefighting humanoids for the U.S. Office of Naval Research, which aims to protect troops from dangerous blazes aboard ships. In November 2014, tests aboard a decommissioned Navy vessel, the Shipboard Autonomous Firefighting Robot, or SAFFiR, showed it could walk on an uneven floor, hold a fire hose, and find and extinguish flames. A newer version, the Electric Series Compliant Humanoid for Emergency Response, participated in the DARPA Robotics Challenge in June 2015 in Los Angeles County, California. While both robots are two-legged, 5-foot-10-inches tall

and made mostly of aluminum metal, ESCHER has several upgrades, including the ability to climb stairs and more than double SAFFiR’s 30 minutes of battery power, according to Brian Lattimer, a Virginia Tech associate professor of mechanical en-