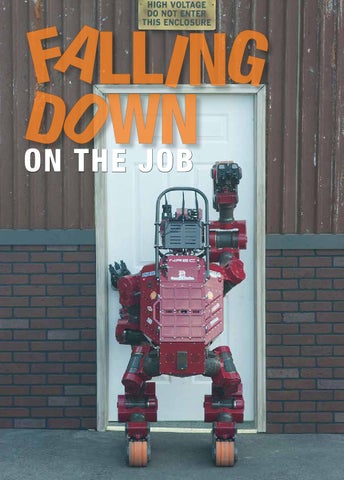 By Brett Davis and Danielle Lucey

A team from South Korea took the $2 million top prize at DARPA’s Robotics Challenge in Pomona, California, in early June, a competition intended to jumpstart the field of rescue robotics. The KAIST (Korea Advanced Institute of Science and Technology) team wasn’t in the top rankings going into the final day of competition at a horse-racing track in Pomona, California, but its multi-jointed DRC-HUBO robot was able to pull off an upset by completing all eight of the competition’s tasks in just under 45 minutes, vaulting it into first place and earning it a $2 million check. KAIST was followed in the top standings by Team IHMC Robotics. The Pensacola, Florida-based Fan favorite Institute for HuCHIMP robot, man and Machine from Team Tartan Cognition was also Rescue, attempts the second-place to open a door. finisher at the first robotic trials, held at the end of 2013 in Florida. The team took home $1 million. IHMC, using a DARPA-supplied Atlas robot, also completed all eight tasks, although it took six minutes longer than KAIST. Taking third place and $500,000 was Team Tartan Rescue from Carnegie Mellon University, whose CHIMP robot was the fan favorite on the first day of the competition, becoming the only robot in the finals to be able to pick itself up after a fall. In all, 23 teams competed; two from Germany, one from Hong

Kong, one from Italy, four from Japan, three from South Korea and 12 from the United States. uuu

The competition was inspired by recent global events, specifically the tsunami and nuclear disaster in Japan. “We were inspired by the disaster in Fukushima,” said Program Manager Gill Pratt at a media briefing the day before the competition. For instance, the valve-turning task was taken directly from the incident, where a nuclear reactor was pushed into a meltdown when hydrogen gas was unable to escape through a valve in an area too dangerous to access with humans. “If only there could have been some way to go in there despite the power being off and operate the emergency equipment they had,” he said. To operate in such post-disaster environments, the robots would need to be humanoid, or at least able to operate in an environment designed for humans. To that end, the challenge included eight tasks: driving a vehicle, exiting it, opening a door, closing a valve, drilling through a wall, a surprise task (in the last round, relocating an electrical plug), negotiating a rubble pile and climbing stairs. Communications are often the first thing to go in the wake of a disaster, so DARPA replicated that, too, by degrading the link between the robots and their controllers, housed in a nearby building. Comms started

going bad the second the robots walked over the first door’s threshold. It could take up to 30 seconds for a signal to reach the robot after that point, so having at least some autonomy onboard the robot was key. Before the competition began, Pratt did his best to downplay expectations. The tasks would take a human maybe five to 10 minutes to complete, at most, yet it took the best robots nearly an hour and some didn’t manage to complete them at all. “You have not lived until you’ve taken 30 minutes to go through a door. It’s really exciting,” he quipped at a press briefing the day before the competition began. “These things really are amazingly dumb. They can barely do anything at all. I know there are all sorts of questions you’re going to ask, about isn’t this the Terminator. It’s big, it weighs 350 pounds, and it’s made out of steel, and it looks scary. And the answer is, it can barely stand up on its own and falls down most of the time.” Unlike in the 2013 trials, the robots were not suspended by tethers, so when they fell, they fell hard — the Atlas robots, for instance, are the ones that weigh 350 pounds each and they don’t attempt to break their fall. Almost every robot that could fall did fall, sometimes more than once. One of the most memorable things to come out of the competition is a video of the robotic pratfalls, but Pratt said the real impact may be years away. DARPA’s automated driving challenges of last decade showed AUGUST 2015 | UNMANNED SYSTEMS

The Institute for Human and Machine Cognition’s Atlas robot, named Running Man, prepares to tackle the drilling challenge at the Robotics Challenge.

wheels, which made it faster as it moved through the mock disaster site carrying out the various tasks. When it needed to be taller to complete a task, such as the final task of climbing the stairs, it could just stand up and walk. On the first day of competition, KAIST had frozen and then managed to knock off its communications pack, requiring a restart, which cost the team time. It still completed seven of the eight tasks and ended up in sixth place. It didn’t encounter such troubles on day two, moving smoothly through the tasks.

KAIST had come in sixth on the first day of the competition. At that time, based on the rankings, it wasn’t even in the top tier of teams, which ran the day prior. However, the team dispatched the competition’s tasks so speedily that it sewed up the results before the favorites even got to run. DRC-HUBO, which stands for humanoid robot, has legs that can fold so the robot can then move on 24 |

So what types of robots fared better at the competition? On the first day, the non-humanoids ruled the roost, starting with CHIMP, followed by Team NimbRo Rescue with its cart-based Momaro and NASA’s Jet Propulsion Lab with its Robosimian, which looked more like a spider. Seven of the teams used a new and improved version of the DARPAsupplied Atlas robots, built by Boston Dynamics. On the final day of the competition, the humanoid robots roared back. KAIST’s humanoid robot demonstrated the capabilities provided by having both wheels and legs, and IHMC’s Running Man again put the Atlas robot in the nexthighest spot. The non-humanoids were again represented by CHIMP, the third-place finisher. All of the robots had a harder time in the finals than they did in the preliminary round, held in Florida in December 2013. There, the robots had access to power lines and also didn’t have to perform each task sequentially. They were also tethered to keep them from crashing to the ground.

While many teams used the humanoid Atlas robot, others went for alternative designs, like NASA’s RoboSimian.

After its more successful Saturday run, the IHMC robot — dubbed Running Man —did a little victory wave from the top of the stairs before falling over, although it didn’t fall before it got its full allotment of eight points. “We were showing off. People liked it,” said the team’s Nicolas Eyssette of the post-victory crash. Team Tartan Rescue’s CHIMP robot was the sentimental favorite on the first day of the competition. CHIMP fell hard attempting to go through the first door after exiting the vehicle. Its run seemed over, but after minutes of staying supine, the robot came to and revived its run. It cut a hole around the circle on the

plywood wall — albeit in a giant square shape, that veered into the middle of the circle before the robot corrected its drawing. It stumbled about four or five times, creeping its way up the stairs on its tracked arms and legs. But it was still the best robot of the day. The robot seemed eager to go in its final run on the second day, crashing into a barrier as it drove up in its cart to begin the tasks. After that, CHIMP seemed to lose steam and was only able to complete five tasks in the allotted hour. The competition featured plenty of robotic pratfalls, which drew gasps from the crowd, but also had three teams that were able to complete all

eight tasks, and four more that were able to finish seven. “It’s been an astounding two days,” said DARPA Director Arati Prabhakar. “Every single stumble we felt, it broke our hearts. Every success caused our spirits to soar.” Pratt said researchers are only in the beginning of what needs to be done in the field of robotics. “What we have done is shown the world a little bit, just a tiny bit, of what is possible,” he said. “There’s so much more work to be done, I’m sure that all of you are doing to do a whole lot more of it in years to come, and you will remember this day as the beginning … and I cannot wait to see the work you do in the future.”  AUGUST 2015 | UNMANNED SYSTEMS