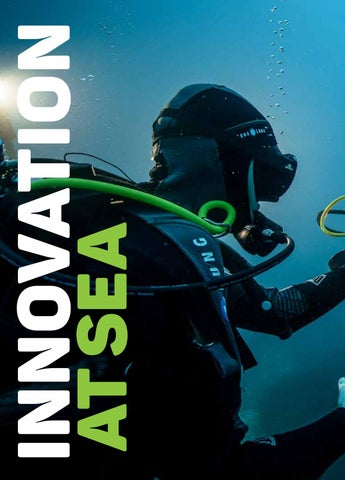 Underwater Vehicle Makers Getting Creative With Designs and Missions

Technological innovation is playing an increasingly significant role as interest grows around the world in maritime exploration. Take, for example, OceanOne — a prototype underwater humanoid robot which has been developed by Stanford University researchers. Earlier this year it, was put to the test 100 meters below the surface of the Mediterranean Sea. Its mission was to explore the wreck of La Lune, the flagship of King Louis IV, which sank 20 miles off the southern coast of France in 1664. The robot, which its developers call a “robo-mermaid” because of its human-like form, was designed with haptic feedback to allow human pilots to control its movements. At about five feet long, its torso features a head with stereoscopic vision that shows the pilot exactly what the robot sees. The tail section houses batteries, computers and multidirectional thrusters. But what the developers claim sets the robot apart from other machines are its two fully articulated arms. Each fully articulated wrist is fitted with sensors that relay haptic feedback to the pilot’s controls, so the human can feel whether the robot is grasping something firm and heavy or light and delicate. According to the project team, the humanoid form also means that when OceanOne dives alongside humans, its pilot can communicate through hand gestures during complex tasks or scientific experiments. “You can feel exactly what the robot is doing. It’s almost like you are there,” says project leader Prof. Oussama Khatib from Stanford’s Department of Computer Science. “With the sense of touch, you create a new dimension of perception.” 32 |

The Scubo project, backed financially by Disney Research, aims to make a small, agile robot to scan coral reefs or even be used for entertainment.

During its mission in the Mediterranean, Khatib used a joystick to send OceanOne down to the wreck of La Lune. It successfully picked up a vase from the scene and placed it in a recovery basket for collection. OceanOne was originally designed with exploration of coral reefs in mind, but its developers say it can take on tasks that are either dangerous, such as deepwater mining and oil-rig maintenance, or simply beyond the physical limits of human divers. The development of OceanOne was supported by Meka Robotics and the King Abdullah University of Science and Technology in Saudi Arabia.

Technical innovation has also played a key role in an expedition, which set out this summer to address the huge technical challenges faced in exploring for seafloor mineral deposits. A team led by the National Oceanography Centre left Southampton in England on a 2,000-kilometer voyage on board the Royal Research Ship James Cook to the Mid-Atlantic Ridge at the end of June.

Since the dive to La Lune, it has returned to the Stanford campus, where Khatib and his students are continuing to iterate on the platform.

Its equipment inventory included two electromagnetic imaging systems to help locate minerals and a sixton robotic drilling rig, called RD2. Developed by NOC’s partners in the British Geological Survey, its role was to bore holes deep into the deposits and extract mineral samples.

The team intends to build more units, which they say would “work in concert” during a dive.

Murton to enable work to be carried out remotely, thousands of meters down on the seafloor.

HyBis, which was constructed for Murton by British company HydroLek (now Saab-Seaeye), uses thrusters for maneuverability and carries cameras, lights and a variety of tools. These include a manipulator arm, a large grabber and a payload deployment system for placing heavy instruments precisely on the seafloor.

In an email sent from the James Cook, Murton told Unmanned Systems that the maps would help the team locate the ideal sites for the HyBIS dives, which in turn would precisely locate the landing sites for RD2. “It is a beautiful example of robots working closely together to enable precision operations on the seafloor at a depth of 3,500 meters,” he wrote. “Without these robots, this work would not be possible.”

One of its main roles on the expedition was to survey the seafloor for suitably flat landing sites for the RD2 to drill. To achieve that, it was fitted with a special color spectrometer developed by researchers at the University of Trondheim in Norway.

The expedition is part of the multimillion pound United Kingdom- and European Union-funded Blue Mining project, which has drawn together industry and research organizations in an effort to “bring sustainable deepsea mining a big step closer.”

A month before the mission, the target Mid-Atlantic Ridge area was mapped in high resolution by a marine research autonomous underwater vehicle called ABYSS, developed by the Germany-based Helmholtz Centre for Ocean Research, also known as GEOMAR.

Before the mission got under way, Murton says the challenges posed by deepsea exploration were “similar in scale” to space exploration. “The deep seafloor we will be exploring during our expedition is an extreme environment of intensepressure and eternal darkness hiding

a rugged landscape akin to a combination of the Grand Canyon and Monument Valley 3.5 kilometers beneath the waves,” he adds. uuu

In a separate development, a group of mechanical engineering students from Swiss university ETH Zurich have designed and built an unmanned underwater vehicle called Scubo, backed by funding from Disney Research and other sponsors. Designed to move omnidirectionally, the 25-kilogram vehicle is equipped with eight thrusters. It features six onboard cameras and five modular ports, which allows users to connect their own sensors. Scubo can be steered manually with a mouse connected to the surface via a tether. The project team says their goal had been to build “a small and highly agile submersible” that could scan coral reefs or simply be used for entertainment purposes in lakes or aquariums. SEPTEMBER 2016 | UNMANNED SYSTEMS

“We see the main difference to other submersible robots in Scubo’s agility and the ability to add additional sensors, cameras or lights,” team member Leonie Traffelet tells Unmanned Systems. “This makes it possible to use Scubo for any application. In the future we will keep working on making Scubo operate fully autonomously. We are working on a stereo vision approach to make Scubo achieve autonomy. This will be the main work for the next year.” The team also plans to increase Scubo’s depth rating, which is currently about 20 meters. Traffelet added that several companies had expressed interest in collaborating with the project but declined to name them.

Meanwhile, a startup which developed a low-cost underwater telerobotic submarine for the mass market is about to enter a new commercial phase. OpenROV, which was founded several years ago by California-based engineers Eric Stackpole and David Lang, used crowdfunding to develop affordable open-source ROV kits as part of a mission to “democratize ocean exploration.” Having sold about 3,000 kits to date to more than 50 countries, it has now developed a fully assembled ROV called Trident, with a price tag of under $1,200 for a basic unit. The underwater drone weighs less than three kilograms and can dive to a maximum depth of 100 meters. It has been designed to move at up to two meters per second, which its makers say is “as fast as an Olympic swimmer.” They also say its shape and design makes it ideal for projects such as 3-D mapping that require it to move along transects — long straight lines for surveying large areas.

It also has a built-in encoder, which will allow in-browser recording and live streaming of the video feed over The tether is linked to a radio buoy the internet. that can be towed along the surface The company expects the first as the vehicle moves, allowing users batch of about 2,000 units to start to stay on shore and connect to the shipping in November. buoy wirelessly. According to Stackpole, presales But for Eric Stackpole, Trident is have been “going very well. “all about the camera.”

Live video can be sent back to the surface by way of a thin, neutrally buoyant tether.

“The main reason people will want to use Trident is to capture imagery, so we’ve really spent a lot of time perfecting our video system,” he told Unmanned Systems. The camera captures digital 1080p HD video at 30 frames per second.

“We expect Trident, which comes ready to fly out of the box, to beat our current sales volume by an order of magnitude,” he says. OpenROV hopes to have sold a total of 10,000 ROVs since the company’s foundation by the end of next year.  SEPTEMBER 2016 | UNMANNED SYSTEMS