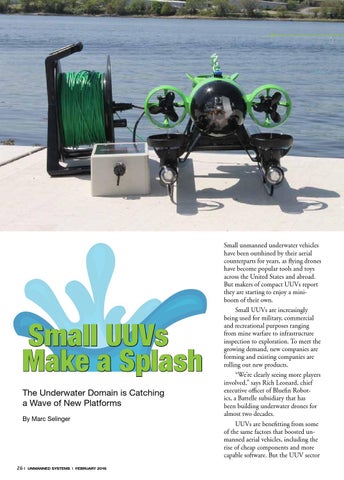 Small unmanned underwater vehicles have been outshined by their aerial counterparts for years, as flying drones have become popular tools and toys across the United States and abroad. But makers of compact UUVs report they are starting to enjoy a miniboom of their own.

Small UUVs are increasingly being used for military, commercial and recreational purposes ranging from mine warfare to infrastructure inspection to exploration. To meet the growing demand, new companies are forming and existing companies are rolling out new products. “We’re clearly seeing more players involved,” says Rich Leonard, chief executive officer of Bluefin Robotics, a Battelle subsidiary that has been building underwater drones for almost two decades. UUVs are benefitting from some of the same factors that boosted unmanned aerial vehicles, including the rise of cheap components and more capable software. But the UUV sector