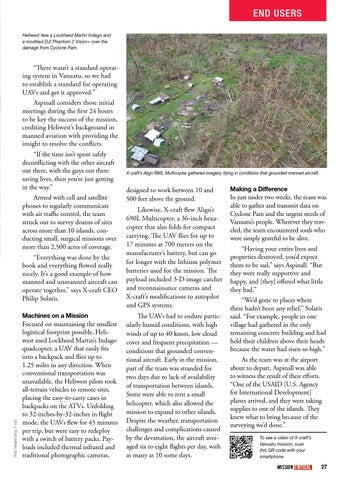 END USERS Heliwest flew a Lockheed Martin Indago and a modified DJI Phantom 2 Vision+ over the damage from Cyclone Pam.

“There wasn’t a standard operating system in Vanuatu, so we had to establish a standard for operating UAVs and get it approved.” Aspinall considers those initial meetings during the first 24 hours to be key the success of the mission, crediting Heliwest’s background in manned aviation with providing the insight to resolve the conflicts. “If the time isn’t spent safely deconflicting with the other aircraft out there, with the guys out there saving lives, then you’re just getting in the way.” Armed with cell and satellite phones to regularly communicate with air traffic control, the team struck out to survey dozens of sites across more than 10 islands, conducting small, surgical missions over more than 2,500 acres of coverage. “Everything was done by the book and everything flowed really nicely. It’s a good example of how manned and unmanned aircraft can operate together,” says X-craft CEO Philip Solaris.

Machines on a Mission

Focused on maintaining the smallest logistical footprint possible, Heliwest used Lockheed Martin’s Indago quadcopter, a UAV that easily fits into a backpack and flies up to 1.25 miles in any direction. When conventional transportation was unavailable, the Heliwest pilots took all-terrain vehicles to remote sites, placing the easy-to-carry cases in backpacks on the ATVs. Unfolding to 32-inches-by-32-inches in flight mode, the UAVs flew for 45 minutes per trip, but were easy to redeploy with a switch of battery packs. Payloads included thermal infrared and traditional photographic cameras,

designed to work between 10 and 500 feet above the ground. Likewise, X-craft flew Align’s 690L Multicopter, a 36-inch hexacopter that also folds for compact carrying. The UAV flies for up to 17 minutes at 700 meters on the manufacturer’s battery, but can go for longer with the lithium polymer batteries used for the mission. The payload included 3-D image catcher and reconnaissance cameras and X-craft’s modifications to autopilot and GPS systems. The UAVs had to endure particularly humid conditions, with high winds of up to 40 knots, low cloud cover and frequent precipitation — conditions that grounded conventional aircraft. Early in the mission, part of the team was stranded for two days due to lack of availability of transportation between islands. Some were able to rent a small helicopter, which also allowed the mission to expand to other islands. Despite the weather, transportation challenges and complications caused by the devastation, the aircraft averaged six to eight flights per day, with as many as 10 some days.

In just under two weeks, the team was able to gather and transmit data on Cyclone Pam and the urgent needs of Vanuatu’s people. Wherever they traveled, the team encountered souls who were simply grateful to be alive. “Having your entire lives and properties destroyed, you’d expect them to be sad,” says Aspinall. “But they were really supportive and happy, and [they] offered what little they had.” “We’d gone to places where there hadn’t been any relief,” Solaris said. “For example, people in one village had gathered in the only remaining concrete building and had held their children above their heads because the water had risen so high.” As the team was at the airport about to depart, Aspinall was able to witness the result of their efforts. “One of the USAID [U.S. Agency for International Development] planes arrived, and they were taking supplies to one of the islands. They knew what to bring because of the surveying we’d done.” To see a video of X-craft’s Vanuatu mission, scan this QR code with your smartphone. MISSION CRITICAL