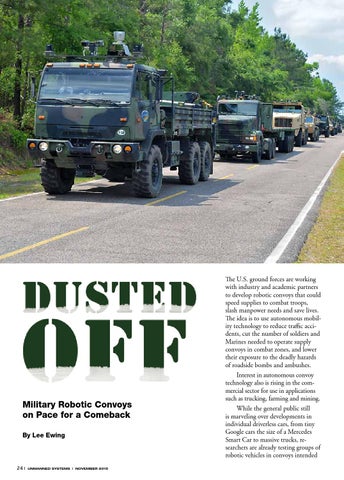 The U.S. ground forces are working with industry and academic partners to develop robotic convoys that could speed supplies to combat troops, slash manpower needs and save lives. The idea is to use autonomous mobility technology to reduce traffic accidents, cut the number of soldiers and Marines needed to operate supply convoys in combat zones, and lower their exposure to the deadly hazards of roadside bombs and ambushes.

Military Robotic Convoys on Pace for a Comeback By Lee Ewing

Interest in autonomous convoy technology also is rising in the commercial sector for use in applications such as trucking, farming and mining. While the general public still is marveling over developments in individual driverless cars, from tiny Google cars the size of a Mercedes Smart Car to massive trucks, researchers are already testing groups of robotic vehicles in convoys intended

The AMAS program could cut down on the number of truck drivers needed by the U.S. Army.

to move them and their vital cargo more safely and efficiently. uuu

One major program to develop driverless military convoys is the Autonomous Mobility Appliqué System (AMAS), a Lockheed Martin-U. S. Army Tank-Automotive Research, Development and Engineering Center program, says Joe Zinecker, director of Lockheed Martin’s Combat Maneuver Systems. AMAS is a Joint Capability Technology Demonstrator program in which the U. S. Army and the U.S. Marine Corps are working together toward standardizing the AMAS kits so warfighters could transform a wide range of vehicles into optionally manned vehicles. “Currently, one of the greatest threats to our men and women in the field is the roadside bomb,” Bernard Theisen, TARDEC’s AMAS technical manager and ground vehicle robotics engineer, said last year. “This technology would enable us to send an unmanned lead vehicle down these dangerous supply routes and keep our warfighters safe.”

To date, AMAS has undergone two notable tests. In the first, conducted at Fort Hood, Texas, in January 2014, “three unmanned military trucks negotiated oncoming traffic, followed rules of the road, recognized pedestrians and avoided various obstacles at speeds up to 25 mph in an urban environment,” the Army said on its website. The second driverless line-haul demonstration was conducted May

29, 2015, at the Department of Energy’s Savannah River Site in South Carolina. It focused on seven AMASequipped military trucks traveling at up to 40 mph. Despite these successful demonstrations, currently there are no programs or budgets for fielding autonomous convoys, Zinecker says. “The Army is still developing its strategy for fielding autonomous convoys and has not yet established programs of record, nor has it established budgets.” The Army, under pressure to sharply reduce its manpower while maintaining its combat capabilities, could cut many truck drivers with the advent of AMAS technology, he says. “You probably wouldn’t go down to an utterly unmanned convoy,” Zinecker says. “Right now, in many vehicles, you’ll find two drivers, a driver and an assistant driver. You might be able to reduce that by half. In the most autonomous convoys that are being envisioned, you could imagine maybe a driver or two that are husbanding three or four or five vehicles,” he says. “That might go, let’s say, from 10 drivers to two drivers for five vehicles.” The next step toward fielding robotic convoys is for customers to decide how to use them. “The reality is the Army is still working through and thinking through all the possibilities, how they would affect their operational utilization of the vehicles, how it would affect survivability of the soldier, how it would affect the security of the convoy. But it’s safe to say that the opportunity certainly exists for a reduction of half in the number of drivers and it could be as much as 80 percent,” he says. Zinecker sees two paths forward. One is to further develop AMAS, which he says “could fairly quickly transition into existing vehicles and

provide a substantial reduction in the overall force required to drive a convoy enterprise. ... It could happen, say, in the next three years, perhaps even sooner than that. The other path that AMAS could go though would be to go for further development of more autonomy. We believe the Army should be considering, probably is considering, both of those approaches.” Lockheed Martin and the government are discussing an extended warfighter experiment over six months in 2016 that would operate a convoy of six to eight vehicles of the same type using AMAS. The experiment is designed to test concepts of operations and tactics, techniques and procedures so that the Army “can start establishing not just what does the autonomy do but how does the rest of the Army operate with autonomy.” Toward that end, Army officials have said, TARDEC is working closely with the U.S. Army Training and Doctrine Command, military users, and the acquisition community to advance the development of autonomous appliqué systems for tactical vehicles and make these capabilities available by 2020. This development program is scheduled to be completed in 2016. “The main program that we are working is … autonomous ground resupply,” says Jim Parker, TARDEC’s associate director for ground vehicle robotics. That is the major thrust for us, … provide the capability that TRADOC is asking for, that we will then transition to the PEO [Program Executive Office] for the Combat Support and Combat Service Support for application to the tactical wheeled vehicle fleet.” Another prominent endeavor is TerraMax, an Office of Naval NOVEMBER 2015 | UNMANNED SYSTEMS

The Oshkosh TerraMax, along with the Lockheed AMAS, are under the Autonomous Ground Resupply program, which launches in fiscal year 2016.

Research and Oshkosh Defense venture. Parker says both AMAS and TerraMax are under the Autonomous Ground Resupply program, which launches in fiscal year 2016. It consists of sustainment operations, in which convoys carry cargo from the port of debarkation to a forward operating base, and “last mile” tactical operation convoys, which transport cargo from a combat outpost to a patrol base. The tactical operation is especially challenging, because the driverless trucks must be able to operate off-road in complex, often difficult terrain and low-visibility conditions. “We have an additional program called the Ground Degraded Vision Environment,” Parker says, which began last year and ends in fiscal year 2019. “Sensors that the Army [Night Vision and Electronic Sensors Directorate] develops to enable helicopter pilots to fly when visibility is low will 26 |

be used on ground vehicles so that they can operate in darkness, dust, fog or rain with the same visibility level as on a clear day.

with John Deere to create solutions that enabled farmers to string together tractors and other vehicles and move them from one field to another.

“The use of autonomy-enabled systems is a new capability for the Army,” Parker says, and the service is working on how best to use this capability as well as on advancing the technology. One hurdle that must be overcome is improving off-road performance for robotic convoys. Another is making effective use of advances in commercial driverless vehicles. Some trucking companies are exploring commercial autonomous convoys as a way to improve safety and reduce fuel costs.

ASI provides dynamic perception through its Vantage component, which has a mix of hardware sensors like radar and lidar and proprietary algorithms that enable vehicles to detect and avoid obstacles. The U. S. Department of Transportation also has done some work with robotic convoys, Mike McNair, autonomous and intelligent systems director at the University of Texas Arlington Research Institute, says, adding that interest in driverless convoys

is international as Japan, Germany, Sweden and others all have significant ongoing work with driverless truck convoy research.

U. S. special operations forces already are using appliqué kits on some of their tactical vehicles, he adds.

Congress in 2001 directed that one-third of all operational ground vehicles be unmanned by 2015, but given the pace of development, that goal will not be met. In addition to military convoys, “there is definitely commercial interest, and that is where, for instance, the U. S. Department of Transportation published their driverless vehicle policy back in May of 2014,” McNair says. “That includes use of convoys on our U. S. highway system.” “There is a rapidly evolving technology boost that’s coming from the commercial sector, things like the Google car, for instance, that work well in a controlled environment … but need to be translated into a very unpredictable environment, an off-road environment that you would typically find with military applications. A third challenge area has to do with obstacle avoidance in very dynamic and dense environments” like those found in major cities.

Uncertain federal funding also can affect the pace of development, McNair says. “I’m beginning to see a funding shift basically moving from defense to the civilian and commercial market when it comes to autonomous vehicles in general and even convoy operations specifically.” 

“There are a number of suppliers that market appliqué systems. For instance, TORC Robotics, Kairos Autonomi, Autonomous Solutions and other companies. They each have their own fielded appliqué kit.”

The ONR Autonomous Ground Resupply program tasks vehicles like the TerraMax with cargo carrying to forward operating bases and tactical operation convoys that deliver goods from a combat outpost to a patrol base.

The Convoys are Coming

The Convoys are Coming