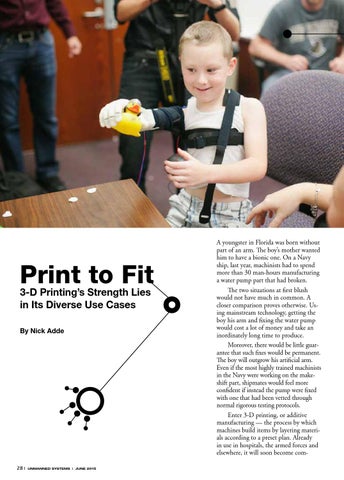 A youngster in Florida was born without part of an arm. The boy’s mother wanted him to have a bionic one. On a Navy ship, last year, machinists had to spend more than 30 man-hours manufacturing a water pump part that had broken. The two situations at first blush would not have much in common. A closer comparison proves otherwise. Using mainstream technology, getting the boy his arm and fixing the water pump would cost a lot of money and take an inordinately long time to produce. Moreover, there would be little guarantee that such fixes would be permanent. The boy will outgrow his artificial arm. Even if the most highly trained machinists in the Navy were working on the makeshift part, shipmates would feel more confident if instead the pump were fixed with one that had been vetted through normal rigorous testing protocols. Enter 3-D printing, or additive manufacturing — the process by which machines build items by layering materials according to a preset plan. Already in use in hospitals, the armed forces and elsewhere, it will soon become com-

Alex Pring, 7, had his bionic arm crafted by the University of Central Florida.

monplace. Before that happens, the machines must evolve. “It’s not the children that have to change. The tools need to change,” says Albert Manero II, the Fulbright scholar who headed a team at the University of Central Florida, which developed the bionic right arm for the boy, Alex Pring. “We needed to give Alex the tools so that he can chase his dreams. Science is a tool to help people,” Manero says. Before the Navy can implement shipboard use of additive manufacturing, such devices would have to be able to produce equipment out of sturdy materials, says Lt. Tracey Lewis, a medical administration officer. Lewis monitored an experiment on the USS Essex while the ship was at sea last year in which a 3-D printer was installed. Sailors were encouraged to play around with it and determine when and where such a tool could be practical. Lewis describes the feedback she received from shipmates about the printer while speaking before an audience of her sea-service peers during an April 14 professional exposition in Oxon Hill, Maryland. “We currently use plastic. It’s great for prototyping, but not so great for shipboard use,” Lewis says.

Indeed, most 3-D printers in regular circulation employ plastic as the primary building material. Numerous companies, however, are moving forward with development of devices that use sturdier materials. “The materials ideal for general prototyping and certain end-product applications are … stainless steel … and aluminum,” says Frederick Claus, business development manager at the Minneapolis office of Stratasys Direct Manufacturing, a Los Angeles-based international company that special-

izes in 3-D printing and additive manufacturing. The company made headlines two years ago when it unveiled the world’s first gun produced by a 3-D printer. While the technology for metal printing lags, plastics are proving their use. Without plastic material, Manero and his team could not have

developed the bionic arm for Alex. Now an engineer with the German Aerospace Center, Manero was an undergraduate when he first learned of the boy’s case. Manero had a sideline enterprise, now called Limbitless Solutions, when he met the boy about a year later. “Alex’s mom contacted us with

a very special request. She wanted an entire arm, not just a hand,” Manero says. The arm they developed, which by federal regulation cannot be called a prosthetic, was designed to give Alex the ability to function quickly. By incorporating electromyography — the medical technique used to measure activity of skeletal muscles — they designed an arm capable of opening and closing. Manero had a 3-D printer in high school and knew right away that such a device afforded the best possible tool for making the bionic arm. To build it, they used a commercial device manufactured by a subsidiary of Stratasys, the same company that employs Claus. (Claus and his group were not involved in the Limbitless bionic arm project.) “We designed the housing for the inside of the arm that would integrate with our electronics seamlessly,” Manero says. “Then we were able to make artistic shells to go on top of everything.” Manero is being modest by describing the arm’s exterior as an “ar30 |

tistic shell.” In fact, the team designed it to look like Iron Man’s. In time, someone showed Robert Downey Jr., a video of their work. Downey wanted to be a part of it. “He was not a celebrity for hire. He loved it,” Manero says. In March, Downey flew to Florida to present 7-year-old Alex with the new arm. The youngster immediately took to it. “He didn’t know he was going to get a new arm or that it was going to be Iron Man,” Manero says. Alex’s story garnered headlines across the country and around the world. Since then, Manero says, Limbitless has received thousands of requests for arms and legs. They are exploring ways of expansion in hopes of accommodating those requests. To build Alex’s arm, they had to etch circuit boards, solder and assemble everything themselves. “We’ve got to get better at what we do in terms of manufacturing,” Manero says. “We’re looking for help from anyone and everyone.” uuu

As a Navy medical administrator, Lewis acknowledged that she would appear to be an unlikely candidate for running the shipboard test of a 3-D printer. In fact, the skipper of the Essex gave her the project because the original perceived military use for 3-D printers was to possibly print surgical tools for use in hostile environments. The medical connection was enough for the commander, she says. “Through our experience, we were able to identify several opportunities where additive manufacturing has the potential to enable and support warfighter readiness in the fleet,” Lewis says. “The single biggest factor is the ability to print on-demand parts. We can directly support readiness and provide unrestricted self-sustainment at sea,” Lewis says. Additive manufacturing printers could provide immediate access to parts for legacy equipment or temporary replacements for parts that could take weeks or months to ship from shore-based manufacturers to ocean-borne vessels. Or if parts need

modifications, crews could come up with descriptions and designs of what they want and email them to stateside manufacturers. In turn, once manufacturers are finished accommodating the redesign requests, they could email a file that ships’ crews could download from a database and then print. No longer would ships have to maintain large storerooms full of parts they might need during deployments. “Instead, you’d have a few storerooms that have materials. As you identify the part you need, you print the part at the time you need it,” Lewis says. Navy ships, and bases and stations throughout the military, would

have access to a Defense Departmentwide library of electronic files. Users simply would scan the library, find the part they need and print it. Ship machinists would not have to spend hours machining a new part, as Lewis described the story of the broken steam emission valve for that water pump. Already, Lewis says, the printer paid practical dividends. During one such project, some colleagues needed a quadcopter quickly. The colleagues produced the electronics that would guide the small unmanned aircraft, while Lewis and her team printed out the copter itself.

“For a cost of somewhere between

$1,000 and $1,500, we had all the electronics needed to fly this quad copter, with this Velcro video on board, to provide over-the-line surveillance,” Lewis says. “It was cheap, disposable, quick and easy, instead of the highly technical drones we have now.” Lewis also told of how a naval aviation team, faced with a yearlong wait for a part at a cost of $250 a day, instead printed a prototype part at a nearby fleet maintenance center. After testing it, they printed out a final product — completing the project in five weeks instead of a year. “It’s already a reality in what we’re doing,” Lewis says. “We need to educate ourselves and get out of the way.” 