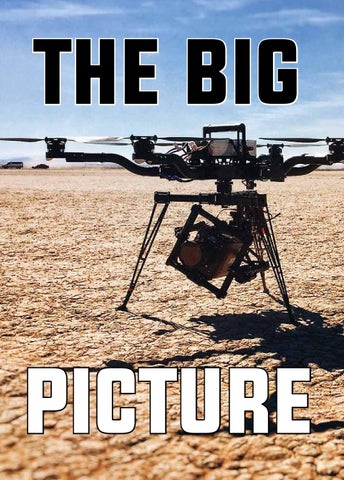 Wild Rabbit says it turns down 50 percent of jobs because of local restrictions about commercial UAS flights.

UAS Use in TV, Movies is Booming, But Not All Players Follow the Rules By John M. Doyle Hollywood’s latest star isn’t a new leading man or lady. It’s a new technology — unmanned aircraft. For years, we’ve seen drones on big and small screens — usually via computer-generated graphics or other special effects — shadowing bad guys and taking out terrorists in spy thrillers or running amok in science fiction dystopias.

But since the Federal Aviation Administration first eased restrictions on commercial drone flights for six motion picture and video companies in late 2014, real drones are appearing on camera, and they’re seeing even more action behind the camera.

Make that above or below the camera. That’s where drone operators usually attach the camera. Several drone/camera companies have created custom, unmanned aerial vehicles sturdy enough to carry professional-caliber digital and film cameras. Around 300 companies, from

New England to Hawaii, have been awarded FAA exemptions to the agency’s ongoing ban on commercial drone use. The motion picture industry was quick to add unmanned aircraft to its special effects bag of tricks. For years they’ve been using UAS to capture the action on location overseas, where drone regulations have been less restrictive or nonexistent. Now the technology has spread to broadcast and cable TV shows, car commercials and music videos. Motion picture cameras that once filmed high-speed car chases or galloping horses from helicopters today are buzzing close to rooftops and down alleys, where a manned aircraft could never go. The aim is to give viewers a new sense of mobile intimacy and excitement, like the motor bike chase scene over Istanbul rooftops in the 2012 James Bond movie “Skyfall.” “It definitely opens up a ton of creative APRIL 2016 | UNMANNED SYSTEMS

TV and movie filming using drones is on the rise, but illegal players are securing business more easily than those with FAA exemptions.

possibilities for directors to tell their stories in new ways,” says Drew Roberts, founder and chief pilot at Los Angeles-based Wild Rabbit Aerial Productions. Roberts’ company, which flies camera-toting drones for motion pictures, cable television and music videos, is switching from custom-made UAS to Freefly Alta hexacopters, which can carry a 15-pound payload. The use of drones in cinematography has been likened to the introduction of the Steadicam camera stabilizer in the 1970s that allows for a smooth, moving shot when crossing uneven ground. Using that technology, moviemakers could follow actors through forests, up circular stairways and through narrow doorways without expensive and time-consuming setups of wooden tracks for camera dollies. And like 28 |

the Steadicam, equipment initially outnumbered experienced drone operators. “There’s no doubt drones are changing the world,” says Dylan Goss, a partner and aerial director of photography at Van Nuys, Californiabased Team5, an aerial photography company that uses both drones and helicopters. To get a low aerial shot in the past, a cinematographer’s only choice was to climb a 24-foot ladder. Now they can fly a camera, he says, adding “that’s beyond disruptive technology. It’s amazing." Team5 started out as a company that supplied the film and television industry with cameras, camera mounts and gimbals for helicopter photography. “And then all of a sudden, we became a company that operated aircraft,” says Goss, noting Team5 now has N-numbered un-

manned aircraft and the insurance to go with it. All of the Team5 personnel involved in filmmaking are either a pilot or member of Hollywood craft guilds. Most of Team5’s work in California is for television and commercials. The company has a small fleet of customized UAS, including one limited to overseas work that’s 60 inches wide and can weigh over 80 pounds. Drones operating in the United States are limited to 55 pounds, and that includes the aircraft and payload. Goss says motion picture giants like Legendary Entertainment and Universal make up only 30 percent of TEAM5’s contracts in a given year, but that business segment accounts for around 70 percent of the company’s revenues. While most major film studios have their business offices in the Los Angeles area, few if any major motion

pictures are actually made in Hollywood. Instead, largely for financial reasons, movies are filmed all over the United States and now overseas. Last year Goss says he spent a month in China and a month in Colombia working on films as well as making four trips to Atlanta and four more to New Orleans. A Team5 crew was on its way to Vietnam in late February where they were using drones to film segments of a big-budget action movie. Southern California, the home of the U.S. movie business, is also a hotbed of movie drone business. But so is Florida, where companies up and down the state shoot video and digital film for movies, TV, commercials and 30 |

last year filming and floating over the Colosseum and other landmarks for a Comcast project tied to Pope Francis’ visit to Philadelphia. It took eight months to win Universal’s favor. “They won’t even talk to you unless you have a 333 exemption, a licensed pilot and $5 million in liability insurance,” Colodny says. Precision flies a range of drones from an Inspire 1 Pro and DJI S900 to a heavy-lift FreeFly Alta and Vulcan X8. uuu

When the FAA approved six film and video companies in 2014 for the first exemptions to the ban on commercial drone flights, Christopher Dodd,

The most restrictive thing we deal with is the FAA. We turn down probably 50 percent of the work that comes our way. — Drew Roberts, Wild Rabbit Aerial Productions

chairman and CEO of the Motion Picture Association of America said it was “a victory for audiences everywhere,” giving filmmakers “yet another way to push creative boundaries.” Aerial MOB was among the six companies granted the first exemption. Based in San Diego, the company had the first major television drone gig after the FAA issued the initial exemptions: a scene of a man running through the woods for an episode of the Warner Bros.-produced CBS program “The Mentalist,” says Tom Carmean, the chief marketing officer. Aerial MOB also shot the aerial sequences for a noteworthy Audi commercial, where people inside a dealership are menaced by a flock of drones, all but one computer-generated in a spoof of Alfred Hitchcock’s “The Birds.” Aerial MOB, which has six different models in its 15-drone fleet, has different sized aircraft for different assignments.

“Our business is definitely on the increase. Revenue more than doubled in 2015 from 2014,” says Carmean, who noted Aerial MOB is the only drone company given the seal of approval by camera maker Panavision and works with all of the Big Six motion picture studios: Universal Pictures, Walt Disney Studios, Warner Bros. Pictures, 20th Century Fox, Columbia Pictures and Paramount Pictures. The Section 333 exemption, which the FAA grants drone-filming companies, still limits their activities. The drone operator must hold a private pilot’s license and keep the unmanned aircraft in sight at all times. Drones cannot fly at night, above 200 feet or within five miles of an airport. While happy to be able to finally work with FAA authorization, cinema drone operators say the continued restrictions on altitude, drone size, safety areas and nighttime operations are beginning to chafe.

“The most restrictive thing we deal with is the FAA,” says Wild Rabbit’s Drew Roberts. The FAA restrictions make it really difficult to operate a camera drone in a metropolitan area.

Precision Aerial’s Colodny says he’s very frustrated, “because the way the rules are set up now, it only keeps the legal companies from doing business, whereas the illegal companies thrive.”

“We turn down probably 50 percent of the work that comes our way due to location restrictions,” he says.

Part of the problem, he says, is how long it takes to get paperwork approved by the FAA. It can take up to 160 days, he says, adding, “I’ve never gotten it approved in under 80 days.” So when a new client calls on Monday to say they need a drone on Tuesday, and he explains how long it will take to get FAA approval, “They say ‘Thank you,’ and then call someone else who says, ‘I’ll be there tomorrow.’”

Those locations require drone operators to put a 500-foot safety zone around where they’re flying, and that could mean closing numerous streets and asking scores of homeowners for permission in a residential area. New clients, who don’t want to spend the time and money or don’t know the rules, will seek to ignore paperwork and FAA regulations, Roberts says, adding, “When we say no, our potential customers will find someone who will say yes.” Competitors, some with FAA approval and most without, violating safety procedure rules to get a client’s business is an issue for other drone companies with exemptions. 34 |

Especially galling is the lack of action taken against drone companies who post videos on their websites of night shoots or flights over downtown city areas way above the 200-foot-ceiling limit. “There’s nothing, nothing being done to them,” Colodny says. Queried about these complaints, the FAA said in a statement, “Any unmanned aircraft operation that isn’t

for hobby or recreational purposes needs FAA authorization. When we become aware of an unauthorized operation, we promote voluntary compliance by educating individual UAS operators about how they need to operate safely under current regulations and laws. We also have a number of enforcement tools available to address unauthorized use of UAS, including warning notices, letters of correction and civil penalties. We urge anyone who is aware of an unauthorized operation such as you’ve described to report it to the FAA.” Drone cinematography is being touted as cheaper and safer — there have been several fatal accidents in recent years — than using a manned helicopter. So are there a lot of underemployed helicopter pilots in Hollywood these days? Not really, say most of the drone companies, who either own or have access to a helicopter. “We use a real helicopter a lot,” says Precision Aerial’s Colodny. “There are shots you cannot get with a drone.” 

The Big Picture: Drones in Cinematography

The Big Picture: Drones in Cinematography