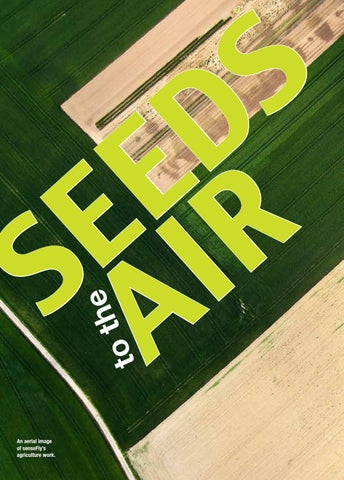 Hundreds of operators of unmanned aerial systems in the U.S. have received the green light from the Federal Aviation Administration to use their vehicles in agriculture, and some see this as an indication of a bright future.

The FAA has approved some 4,000 Section 333 exemptions to fly UAS in commercial operations, more than 400 of which relate to agriculture. The approvals, made on a case-by-case basis, cover such things as aerial filming and inspection of infrastructure, as well as agriculture. The approvals precede final approval of the small UAS rule, expected to occur within months.

Several years ago, after the FAA was tasked by Congress to figure out how to integrate UAS into the National Airspace System, the UAS industry was pressuring the FAA to move quickly. A 2013 AUVSI study, for example, said, “Every year that the integration is delayed, the United States loses more than $10 billion in potential economic impact,” which “trans-

lates to a loss of $27.6 million per day that UAS are not integrated into the NAS.” In June 2014, the FAA granted six exemptions to six companies to use UAS for movie and TV production. One of the first for agriculture came six months later when Trimble of Sunnyvale, California, won approval to use its UX5 fixed-wing vehicle for surveying duties. Since then, Section 333 approvals for a number of UAS jobs have come quickly. Certainly for operators concentrating on precision agriculture, which covers remote sensing and precision application, it’s a welcome development. “I think 333 has been a tremendous help for us,” says Young Kim, president and CEO of Digital Harvest Inc., of Hampton, Virginia. The company works with satellites, manned and unmanned aircraft, and ground sensors to help farmers. Still, the industry is looking forward to the release of the small

UAS rule, which will fully authorize operations of such vehicles in agriculture and other industries. There will be “so many benefits to that,” says Nathan Stein of senseFly SA, a Parrot company based in Lausanne, Switzerland, that builds lightweight unmanned aircraft systems. “Life will be a lot easier” for companies waiting to get into the unmanned systems end of the agriculture industry, he says. “Their legal departments [which are observing current FAA regulations] are preventing them from moving forward.” Stein says some senseFly customers have assumed that winning a 333 was all that was required and have been surprised to find that they had to go through other hoops, like getting an N number for their vehicles and applying for a COA — certificate of authorization — to fly in certain airspace. This “became quite burdensome for a lot of people, because they just realized it was a never-ending amount of paperwork.” In other countries, like France, MAY 2016 | UNMANNED SYSTEMS

After receiving an exemption for Yamaha’s Rmax in July 2015, Digital Harvest partnered with Yamaha and conducted flight demonstrations for Washington tree fruit growers at an Allen Brothers apple orchard in Prosser, Washington.

where senseFly has a number of customers, regulations “are much more forgiving,” Stein says.

At the same time, the granting of 333 authorizations has helped to promote new ways of thinking about the insight and perspective that unmanned vehicle technology gives to farmers. Because it allows a new level of visibility that easily detects changes and leads to improved efficiency and productivity, some say, the technology can apply to other, unrelated, industries — insurance and energy, for instance. “Whether you’re a corn farmer in Iowa or an energy service provider in Alberta, Canada, you’re really looking to manage more effectively,” 40 |

says Thomas Haun, vice president of strategy and globalization for PrecisionHawk, a UAS company based in Raleigh, North Carolina. “When we talk about managing more effectively, it’s understanding the change that’s happening, either in your field or at your site, and it’s identifying anything that is different,” and managing accordingly. Timeliness of insight is important in agriculture — there’s no point in being late with the application of pesticide, for instance — and it can be enhanced by processing data from unmanned systems stored in the Internet’s cloud, Haun says. And, he says, since timeliness also is important in other industries, lessons learned in agriculture cloud processing can also translate. “Everybody is trying to manage more effectively, and effective management means simplicity, accessibil-

ity and fitting into existing workflows. Those are consistent themes, no matter what the industry.” Mitch Torrie, director of vehicle automation at Autonomous Solutions Inc. (ASI) of Logan, Utah, agrees. There’s crossover, “especially when you’re gathering all that data and putting it into a cloud where you can be looking at trends through analytics. I’m sure there will be a lot more opportunities to sell data and information to companies in other industries.” But, he says, industries “have to understand and establish who owns the data and who has access to it.” ASI has products in the mining industry, and Torrie says this has been a struggle there for years. But, he says, there are opportunities, including in the field of driverless cars. Digital Harvest’s Kim says the idea of moving large amounts of data to

the cloud is a good one, but that for unmanned systems and agriculture, it’s still a bit early. “The technology needs to develop a little further,” to the point where bandwidth is increased and file size can be reduced by compression techniques. “Those need to be in place, from our personal experience, before the cloud becomes a useful medium. It is not today.” He says it could happen in a few years.

Meanwhile, according to one view, the Internet of Things — a development of the Internet in which some 500 billion everyday objects by 2030 could all be connected — will someday soon “drive tremendous innovation in the way our food is grown, processed, distributed, stored, and consumed.” David Evans, Cisco’s long-time chief “futurist” and now cofounder

of a small San Francisco software company called Stringfly, writes that “Plants and animals will literally have a ‘voice.’ Not a human voice per se, but a voice based on data that can tell people, computers and machines when, for example, they are thirsty, need more sun, require medicine or need individual attention. “Because food and water are such large and important industries” — farmers will have to produce nearly 100 percent more food to feed a world population that may grow by 2 billion over the next 40 years — “it’s not surprising that several firms, from the largest technology companies to startups, are working on IoT solutions in these areas,” Evans also writes. He says Intel, for one, “is looking to be a leader in the food and agriculture industry with projects that address water and food security, safety and sustainability.” It’s working with Australia “to build tiny sensors that are placed on the backs of bees

to help understand why they are dying in massive numbers around the world. Bees, of course, are of paramount importance, because they pollinate approximately 33 percent of all human food sources.” TechRepublic, which helps IT decision-makers streamline their business processes, says, “Technology companies will have to find a way to work with agriculture companies as the big data and cloud world intersects with the agriculture one.” But this is already happening. “If you look at the large ag OEMs, they’ve made a lot of progress in that area. They’re fairly high-tech already,” says Torrie of ASI. Among other things, this means that maintenance alerts can be automatically sent to dealers, who pass the information on to customers. “That’s already being pushed to the cloud and run that way,” Torrie says. The OEMs have “done a lot of that groundwork so now when you get more advanced technology like autonomy, the frame-

SenseFly says its customers are often surprised at the amount of regulatory steps they need to take to perform agriculture work. Shown here is the company’s eBee Ag UAS. About one-tenth of the Section 333 exemptions as of mid-March were for agricultural use.

work is there to leverage.” Hackers could be lurking, but it’s not a major concern, because, for one thing, there’s little centralization of data. Still, establishment of protocols similar to those of the banking industry might be considered, says senseFly’s Stein. The Departments of Homeland Security and Agriculture, among government agencies, do keep an eye on food safety. Rep. Martha McSally (R-Ariz.) of the House Homeland Security subcommittee says the threat is real. “An agri-terrorism attack would 42 |

... would present a serious threat to this nation and cause major economic damage on a number of levels,” she said at a Feb. 26 hearing. “Intelligence indicates that terrorists have discussed vulnerabilities in various components of this sector. Food and agriculture is an attractive target to terrorists because many agents are easy to obtain [and] minimal technology is required to execute an attack.” Torrie of ASI sees the day when unmanned ground vehicles, of the type his company provides, and UAS

will cooperate in farmers’ fields. So does Digital Harvest’s Kim. And, Kim says, an agriculture network (not unlike a military network that links ground and air vehicles and their sensors) would be able to deliver information “to the field worker, to the farmer, to Dole, to Costco, to Kroger and Safeway — all of that becomes possible.” Ernest Earon, president and cofounder of PrecisionHawk, says it’s important to keep in mind the “huge and positive impact this [UAS] technology can have because ... it’s not about the drone. It’s about the information that the drone can provide. Information is the key, because that’s what allows us to implement the truly transformative solutions.” 

Internet of Things and Cloud Computing in Unmanned Ag

Internet of Things and Cloud Computing in Unmanned Ag