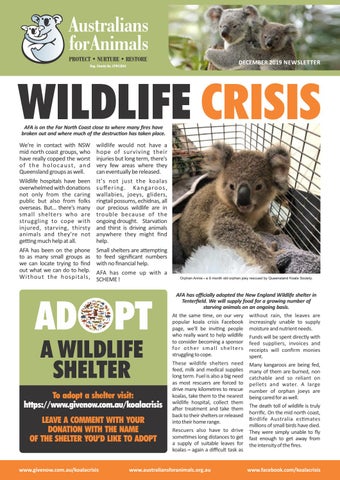 WILDLIFE CRISIS AFA is on the Far North Coast close to where many ﬁres have broken out and where much of the destruc on has taken place.

We're in contact with NSW mid north coast groups, who have really copped the worst of the holocaust, and Queensland groups as well. Wildlife hospitals have been overwhelmed with dona ons not only from the caring public but also from folks overseas. But… there's many small shelters who are struggling to cope with injured, starving, thirsty animals and they're not ge ng much help at all. AFA has been on the phone to as many small groups as we can locate trying to ﬁnd out what we can do to help. Without the hospitals,

wildlife would not have a hope of surviving their injuries but long term, there's very few areas where they can eventually be released. It's not just the koalas s u ﬀe r i n g . Ka n ga ro o s , wallabies, joeys, gliders, ringtail possums, echidnas, all our precious wildlife are in trouble because of the ongoing drought. Starva on and thirst is driving animals anywhere they might ﬁnd help. Small shelters are a emp ng to feed signiﬁcant numbers with no ﬁnancial help. AFA has come up with a SCHEME !

AD PT A WILDLIFE SHELTER To adopt a shelter visit: https://www.givenow.com.au/koalacrisis LEAVE A COMMENT WITH YOUR DONATION WITH THE NAME OF THE SHELTER YOU’D LIKE TO ADOPT

AFA has oﬃcially adopted the New England Wildlife shelter in Tenterﬁeld. We will supply food for a growing number of starving animals on an ongoing basis. At the same me, on our very without rain, the leaves are popular koala crisis Facebook increasingly unable to supply page, we'll be invi ng people moisture and nutrient needs. who really want to help wildlife Funds will be spent directly with to consider becoming a sponsor feed suppliers, invoices and fo r o t h e r s m a l l s h e l t e rs receipts will conﬁrm monies struggling to cope. spent. These wildlife shelters need Many kangaroos are being fed, feed, milk and medical supplies many of them are burned, non long term. Fuel is also a big need catchable and so reliant on as most rescuers are forced to pellets and water. A large drive many kilometres to rescue number of orphan joeys are koalas, take them to the nearest being cared for as well. wildlife hospital, collect them The death toll of wildlife is truly a er treatment and take them horriﬁc. On the mid north coast, back to their shelters or released Birdlife Australia es mates into their home range. millions of small birds have died. Rescuers also have to drive They were simply unable to ﬂy some mes long distances to get fast enough to get away from a supply of suitable leaves for the intensity of the ﬁres. koalas – again a diﬃcult task as

MISINFORMATION ABOUNDS AFA wants our supporters and the public to be aware of two never ending constantly repeated scenarios promoted by WWF and the Australian Koala Founda on. WWF has well and truly planted the myth that “ koalas will be ex nct by 2050” if habitat clearing goes on at this rate. Se ng a date for ex nc on 30 years in the future not only gives the governments a get out of jail card but there's not a shred of evidence that supports this irresponsible predic on. The reality? Given the impacts of climate change which is killing the forests, along with government approval, the ongoing drought and bushﬁres, koalas will be lucky to last a decade. There's never been a more urgent need to buy up exis ng habitat which can be protected in the long term with areas available for revegeta on. The AKF puts out two highly misleading statements which the mainstream media du fully repeats ad nauseum. A Koala Protec on Act is one eﬀort. Anyone with a knowledge of exis ng legisla on at the state and federal level knows there is absolutely NO possibility of any Koala Protec on Act, it's a fantasy and why the media con nues to push this

misinforma on doesn't inspire conﬁdence in journalists. Then the other one the AKF pushes is “koalas are func onally ex nct.” Garbage. For example, there's a thriving cri cally important major popula on in southwest Sydney currently under threat by a massive Lendlease housing development. In South East Queensland, there are s ll good popula ons at Toondah Harbour and many other areas.. all under threat of development BUT they can be saved if their habitat is protected. The bushﬁres have resulted in some major scams on social media and a real campaign of misinforma on. Koalas can STILL BE SAVED and AFA is pu ng a full page adver sement in PM Morrison's electorate calling on him to acknowledge the massive concern from all over the world and ACT. A wonderful Xmas to our wonderful supporters ! For the Animals, Sue Arnold & Friends.

SAVE THE KOALA CAMPAIGN GUIDELINES

PLEASE GIVE GENEROUSLY You can donate to Australians for Animals through GiveNow’s secure online server or please send your dona ons to:

PLEASE HELP SAVE GET YOURS HERE: http://bit.ly/koalarescue Articles by Sue Arnold: WILDLIFE CRISIS: AFA is on the Far North Coast close to where many fires have broken out and where much of the destr...

Articles by Sue Arnold: WILDLIFE CRISIS: AFA is on the Far North Coast close to where many fires have broken out and where much of the destr...