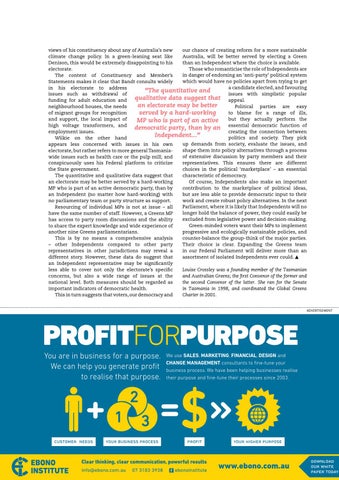 our chance of creating reform for a more sustainable views of his constituency about any of Australia’s new Australia, will be better served by electing a Green climate change policy. In a green-leaning seat like than an Independent where the choice is available. Denison, this would be extremely disappointing to his Those who romanticise the role of Independents are electorate. in danger of endorsing an ‘anti-party’ political system The content of Constituency and Member’s which would have no policies apart from trying to get Statements makes it clear that Bandt consults widely a candidate elected, and favouring in his electorate to address “The quantitative and issues with simplistic popular issues such as withdrawal of qualitative data suggest that appeal. funding for adult education and an electorate may be better Political parties are easy neighbourhood houses, the needs to blame for a range of ills, of migrant groups for recognition served by a hard-working but they actually perform the and support, the local impact of MP who is part of an active essential democratic function of high voltage transformers, and democratic party, than by an creating the connection between employment issues. Independent...” politics and society. They pick Wilkie on the other hand up demands from society, evaluate the issues, and appears less concerned with issues in his own shape them into policy alternatives through a process electorate, but rather refers to more general Tasmaniaof extensive discussion by party members and their wide issues such as health care or the pulp mill; and representatives. This ensures there are different conspicuously uses his Federal platform to criticize choices in the political ‘marketplace’ – an essential the State government. characteristic of democracy. The quantitative and qualitative data suggest that Of course, Independents also make an important an electorate may be better served by a hard-working contribution to the marketplace of political ideas, MP who is part of an active democratic party, than by but are less able to provide democratic input to their an Independent (no matter how hard-working) with work and create robust policy alternatives. In the next no parliamentary team or party structure as support. Parliament, where it is likely that Independents will no Resourcing of individual MPs is not at issue – all longer hold the balance of power, they could easily be have the same number of staff. However, a Greens MP excluded from legislative power and decision-making. has access to party room discussions and the ability Green-minded voters want their MPs to implement to share the expert knowledge and wide experience of progressive and ecologically sustainable policies, and another nine Greens parliamentarians. counter-balance the group-think of the major parties. This is by no means a comprehensive analysis Their choice is clear. Expanding the Greens team – other Independents compared to other party in our Federal Parliament will deliver more than an representatives in other jurisdictions may reveal a assortment of isolated Independents ever could. different story. However, these data do suggest that an Independent representative may be significantly less able to cover not only the electorate’s specific Louise Crossley was a founding member of the Tasmanian concerns, but also a wide range of issues at the and Australian Greens; the first Convenor of the former and national level. Both measures should be regarded as the second Convenor of the latter. She ran for the Senate important indicators of democratic health. in Tasmania in 1998, and coordinated the Global Greens This in turn suggests that voters, our democracy and Charter in 2001. advertisement

PROFITFORPURPOSE You are in business for a purpose. We can help you generate profit to realise that purpose.

We use sales, marketing, financial, design and change management consultants to fine-tune your business process. We have been helping businesses realise their purpose and fine-tune their processes since 2003.

National magazine of the Australian Greens