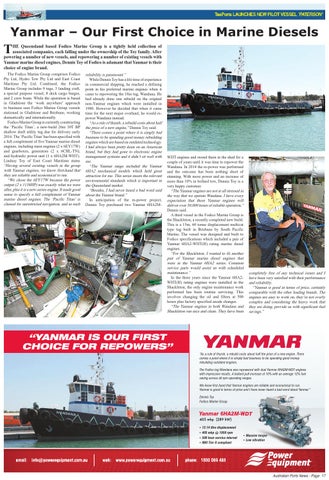 HE Queensland based Fodico Marine Group is a tightly held collection of associated companies, each falling under the ownership of the Toy family. After powering a number of new vessels, and repowering a number of existing vessels with Yanmar marine diesel engines, Dennis Toy of Fodico is adamant that Yanmar is their choice of engine brand.

The Fodico Marine Group comprises Fodico Pty Ltd, Hydro Tow Pty Ltd and East Coast Maritime Pty Ltd. Combined, the Fodico Marine Group includes 9 tugs, 3 landing craft, a special purpose vessel, 8 deck cargo barges, and 2 crew boats. While the operation is based in Gladstone the ‘work anywhere’ approach to business sees Fodico Marine Group vessels stationed in Gladstone and Brisbane, working domestically and internationally. Fodico Marine Group is currently constructing the ‘Pacific Titan’, a new-build 26m 30T BP shallow draft utility tug due for delivery early 2016. The ‘Pacific Titan’ has been specified with a full complement of five Yanmar marine diesel engines, including main engines (2 x 6EY17W) and gearboxes, generators (2 x 6CHL-TN), and hydraulic power unit (1 x 6HA2M-WHT). Lindsay Toy of East Coast Maritime states “Having several existing vessels in the group with Yanmar engines, we know first-hand that they are reliable and economical to run. “We chose the 6EY17W because the power output (2 x 1138HP) was exactly what we were after, plus it is a new-series engine. It made good sense to specify a full complement of Yanmar marine diesel engines. The ‘Pacific Titan’ is classed for unrestricted navigation, and as such

reliability is paramount.” While Dennis Toy has a life time of experience in commercial shipping, he reached a defining point in his preferred marine engines when it came to repowering the 18m tug, Wandana. He had already done one rebuild on the original non-Yanmar engines which were installed in 1980. However he decided that when it came time for the next major overhaul, he would repower Wandana instead. “As a rule of thumb, a rebuild costs about half the price of a new engine,” Dennis Toy said. “There comes a point where it is simply bad business to be spending good money rebuilding engines which are based on outdated technology. I had always been pretty keen on an American brand, but they had gone to electronic engine management systems and it didn’t sit well with me. “The Yanmar range included the Yanmar 6HA2 mechanical models which held great attraction for me. This series meets the relevant environmental standards which is important in the Queensland market. “Besides, I had never heard a bad word said about the Yanmar brand.” In anticipation of the re-power project, Dennis Toy purchased two Yanmar 6HA2M-

WDT engines and stored them in the shed for a couple of years until it was time to repower the Wandana. In 2014 the re-power was performed and the outcome has been nothing short of stunning. With more power and an increase of more than 10% in bollard tow, Dennis Toy is a very happy customer. “The Yanmar engines are not at all stressed in the way that we operate Wandana. I have every expectation that these Yanmar engines will deliver over 30,000 hours of reliable operation,” Dennis said. A third vessel in the Fodico Marine Group is the Shackleton, a recently completed new build. This is a 15m, 60 tonne displacement multicat type tug built in Brisbane by South Pacific Marine. The vessel was designed and built to Fodico specifications which included a pair of Yanmar 6HA2-WHT(H) rating marine diesel engines. “For the Shackleton, I wanted to fit another pair of Yanmar marine diesel engines that were in the Yanmar 6HA2 series. Common service parts would assist us with scheduled maintenance.” In the three years since the Yanmar 6HA2WHT(H) rating engines were installed in the Shackleton, the only engine maintenance work performed has been routine servicing. This involves changing the oil and filters at 500 hours plus factory specified anode changes. “The Yanmar engines in both Wandana and Shackleton run nice and clean. They have been

completely free of any technical issues and I have been very satisfied with their performance and reliability. “Yanmar is good in terms of price, certainly comparable with the other leading brands. The engines are easy to work on, they’re not overly complex and considering the heavy work that they are doing, provide us with significant fuel savings.”

“YANMAR IS OUR FIRST CHOICE FOR REPOWERS” “As a rule of thumb, a rebuild costs about half the price of a new engine. There comes a point where it is simply bad business to be spending good money rebuilding outdated engines. The Fodico tug Wandana was repowered with dual Yanmar 6HA2M-WDT engines with impressive results. A bollard pull increase of 10% with an average 12% fuel saving across all rpm operating ranges. We know first-hand that Yanmar engines are reliable and economical to run. Yanmar is good in terms of price and I have never heard a bad word about Yanmar.” Dennis Toy Fodico Marine Group