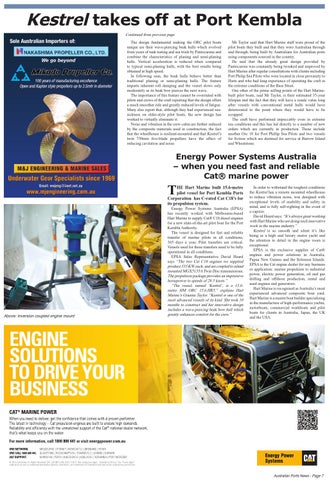 Kestrel takes off at Port Kembla Continued from previous page The design fundamental making the ORC pilot boats unique are their wave-piercing beak hulls which evolved from years of tank testing and sea trials by Pantocarene and combine the characteristics of planing and semi-planing hulls. Vertical acceleration is reduced when compared to typical semi-planing hulls, with the best results being obtained at high speed. In following seas, the beak hulls behave better than traditional planing or semi-planing hulls. The feature imparts inherent roll damping and the vessel slows only moderately as its beak bow pierces the next wave. The importance of this feature cannot be overstated with pilots and crews of the craft reporting that the design offers a much smoother ride and greatly reduced levels of fatigue. Many also report that, although they had experienced seasickness on older-style pilot boats, the new design has worked to virtually eliminate it. Noise and vibration in the crew cabin are further reduced by the composite materials used in construction, the fact that the wheelhouse is resilient-mounted and that Kestrel’s twin 750mm five-blade propellers have the effect of reducing cavitation and noise.

Mr Taylor said that Hart Marine staff were proud of the pilot boats they built and that they were Australian through and through, being built by Australians for Australian ports using components sourced in the country. He said that the already great design provided by Pantocarene was constantly being tweaked and improved by Hart Marine after regular consultations with clients including Port Philip Sea Pilots who were located in close proximity to Harts and who had long experience of operating the craft in the extreme conditions of the Bass Strait. One other of the prime selling points of the Hart Marinebuilt pilot boats, said Mr Taylor, is their estimated 35-year lifespan and the fact that they will have a resale value long after vessels with conventional metal hulls would have deteriorated to the point where they would have to be scrapped. The craft have performed impeccably even in extreme sea conditions and this has led directly to a number of new orders which are currently in production. These include another Orc 18 for Port Phillip Sea Pilots and two vessels for Svitzer which are destined for service at Barrow Island and Wheatstone.

Energy Power Systems Australia (EPSA) has recently worked with Melbourne-based Hart Marine to supply Cat® C18 diesel engines for a new state-of-the-art pilot boat for the Port Kembla Authority. The vessel is designed for fast and reliable transfer of marine pilots in all conditions, 365 days a year. Pilot transfers are critical. Vessels used for these transfers need to be fully operational in all conditions. EPSA Sales Representative David Heard says “The two Cat C18 engines we supplied produce 533 KW each, and are coupled to island mounted MGX5135A Twin Disc transmissions. The propulsion package provides an impressive horsepower to speeds of 28.5 knots.” “The vessel, named ‘Kestrel’, is a 15.6metre HM ORC 15.6.HR5,” explains Hart Marine’s Graeme Taylor. “Kestrel is one of the most advanced vessels of its kind. She took 10 months to construct and her innovative design includes a wave-piercing beak bow hull which greatly enhances comfort for the crew.”

In order to withstand the toughest conditions the Kestrel has a remote mounted wheelhouse to reduce vibration noise, was designed with exceptional levels of usability and safety in mind, and is fully self-righting in the event of a capsize. David Heard says: “It’s always great working with Hart Marine who are doing such innovative work in the marine industry.” Kestrel is so smooth and silent it’s like being in a high end luxury motor yacht and the attention to detail in the engine room is exceptional. EPSA is the exclusive supplier of Cat® engines and power solutions in Australia, Papua New Guinea and the Solomon Islands. EPSA is the Cat engine dealer for any business or application: marine propulsion to industrial power, electric power generation, oil and gas drilling and offshore production, rental and used engines and generators. Hart Marine is recognised as Australia’s most experienced advanced composite boat yard. Hart Marine is a master boat builder specialising in the manufacture of high-performance yachts, motorboats, commercial workboats and pilot boats for clients in Australia, Japan, the UK and the USA.