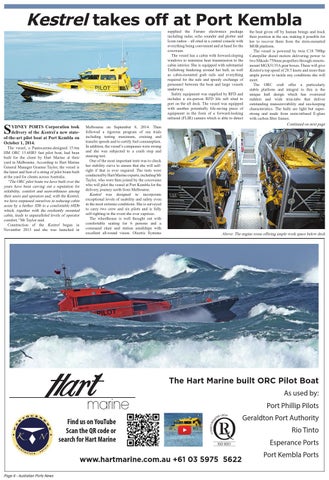 Kestrel takes off at Port Kembla supplied the Furuno electronics package including radar, echo sounder and plotter and Icom radios – all sited in a central console with everything being convenient and at hand for the coxswain. The vessel has a cabin with forward-sloping windows to minimise heat transmission to the cabin interior. She is equipped with substantial Trelleborg fendering around her hull, as well as cabin-mounted grab rails and everything required for the safe and speedy exchange of personnel between the boat and large vessels underway. Safety equipment was supplied by RFD and includes a six-person RFD life raft sited to port on the aft deck. The vessel was equipped with another potentially life-saving piece of equipment in the form of a forward-looking infrared (FLIR) camera which is able to detect

The vessel, a Pantocarene-designed 15.6m HM ORC 15.6HR5 fast pilot boat, had been built for the client by Hart Marine at their yard in Melbourne. According to Hart Marine General Manager Graeme Taylor, the vessel is the latest and best of a string of pilot boats built at the yard for clients across Australia. “The ORC pilot boats we have built over the years have been carving out a reputation for reliability, comfort and seaworthiness among their users and operators and, with the Kestrel, we have surpassed ourselves in reducing cabin noise by a further 3Db to a comfortable 68Db which, together with the resiliently mounted cabin, leads to unparalleled levels of operator comfort,” Mr Taylor said. Construction of the Kestrel began in November 2013 and she was launched in

Melbourne on September 8, 2014. Then followed a rigorous program of sea trials including testing maximum, cruising and transfer speeds and to certify fuel consumption. In addition, the vessel’s compasses were swung and she was subjected to a crash stop and steering test. One of the most important tests was to check her stability curve to ensure that she will selfright if that is ever required. The tests were conducted by Hart Marine experts, including Mr Taylor, who were then joined by the coxswains who will pilot the vessel at Port Kembla for the delivery journey north from Melbourne. Kestrel was designed to incorporate exceptional levels of usability and safety even in the most extreme conditions. She is surveyed to carry two crew and six pilots and is fully self-righting in the event she ever capsizes. The wheelhouse is well thought out with comfortable seating for 6 persons and a command chair and station amidships with excellent all-round vision. Olectric Systems

the heat given off by human beings and track their position in the sea, making it possible for her to recover them from the stern-mounted MOB platform. The vessel is powered by twin C18 700hp Caterpillar diesel motors delivering power to two Mikado 750mm propellers through remotemount MGX5135A gear boxes. These will give Kestrel a top speed of 28.5 knots and more than ample power to tackle any conditions she will meet. The ORC craft offer a particularly stable platform and integral to this is the unique hull design which has oversized rudders and wide trim-tabs that deliver outstanding manoeuvrability and sea-keeping characteristics. The hulls are light but superstrong and made from resin-infused E-glass with carbon fibre frames. Continued on next page

Above: The engine room offering ample work space below deck