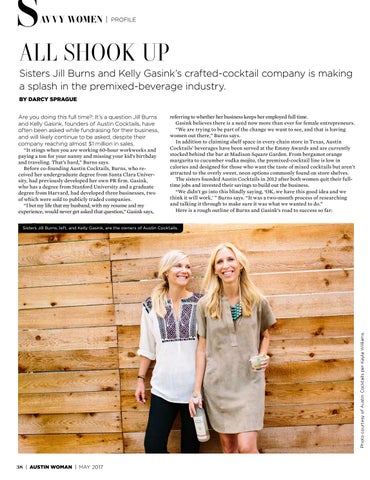 Sisters Jill Burns and Kelly Gasink’s crafted-cocktail company is making a splash in the premixed-beverage industry. By Darcy Sprague

Are you doing this full time?: It’s a question Jill Burns and Kelly Gasink, founders of Austin Cocktails, have often been asked while fundraising for their business, and will likely continue to be asked, despite their company reaching almost $1 million in sales. “It stings when you are working 60-hour workweeks and paying a ton for your nanny and missing your kid’s birthday and traveling. That’s hard,” Burns says. Before co-founding Austin Cocktails, Burns, who received her undergraduate degree from Santa Clara University, had previously developed her own PR firm. Gasink, who has a degree from Stanford University and a graduate degree from Harvard, had developed three businesses, two of which were sold to publicly traded companies. “I bet my life that my husband, with my resume and my experience, would never get asked that question,” Gasink says,

referring to whether her business keeps her employed full time. Gasink believes there is a need now more than ever for female entrepreneurs. “We are trying to be part of the change we want to see, and that is having women out there,” Burns says. In addition to claiming shelf space in every chain store in Texas, Austin Cocktails’ beverages have been served at the Emmy Awards and are currently stocked behind the bar at Madison Square Garden. From bergamot orange margarita to cucumber vodka mojito, the premixed-cocktail line is low in calories and designed for those who want the taste of mixed cocktails but aren’t attracted to the overly sweet, neon options commonly found on store shelves. The sisters founded Austin Cocktails in 2012 after both women quit their fulltime jobs and invested their savings to build out the business. “We didn’t go into this blindly saying, ‘OK, we have this good idea and we think it will work,’ ” Burns says. “It was a two-month process of researching and talking it through to make sure it was what we wanted to do.” Here is a rough outline of Burns and Gasink’s road to success so far:

Sisters Jill Burns, left, and Kelly Gasink, are the owners of Austin Cocktails.