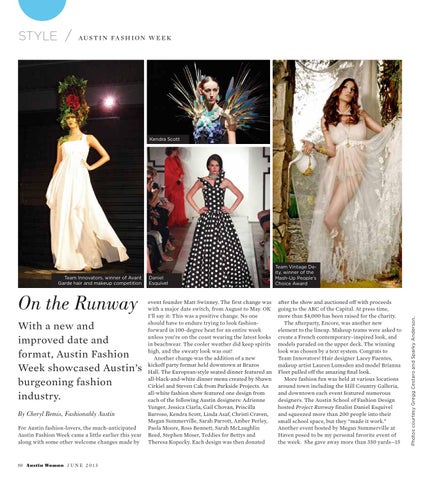 On the Runway With a new and improved date and format, Austin Fashion Week showcased Austin’s burgeoning fashion industry. By Cheryl Bemis, Fashionably Austin For Austin fashion-lovers, the much-anticipated Austin Fashion Week came a little earlier this year along with some other welcome changes made by

event founder Matt Swinney. The first change was with a major date switch, from August to May. OK I’ll say it: This was a positive change. No one should have to endure trying to look fashionforward in 100-degree heat for an entire week unless you’re on the coast wearing the latest looks in beachwear. The cooler weather did keep spirits high, and the sweaty look was out! Another change was the addition of a new kickoff party format held downtown at Brazos Hall. The European-style seated dinner featured an all-black-and-white dinner menu created by Shawn Cirkiel and Steven Cak from Parkside Projects. An all-white fashion show featured one design from each of the following Austin designers: Adrienne Yunger, Jessica Ciarla, Gail Chovan, Priscilla Barroso, Kendra Scott, Linda Asaf, Christi Craven, Megan Summerville, Sarah Parrott, Amber Perley, Paola Moore, Ross Bennett, Sarah McLaughlin Reed, Stephen Moser, Teddies for Bettys and Theresa Kopecky. Each design was then donated

after the show and auctioned off with proceeds going to the ARC of the Capital. At press time, more than $4,000 has been raised for the charity. The afterparty, Encore, was another new element to the lineup. Makeup teams were asked to create a French contemporary–inspired look, and models paraded on the upper deck. The winning look was chosen by a text system. Congrats to Team Innovators! Hair designer Lacey Fuentes, makeup artist Lauren Lumsden and model Brianna Fleet pulled off the amazing final look. More fashion fun was held at various locations around town including the Hill Country Galleria, and downtown each event featured numerous designers. The Austin School of Fashion Design hosted Project Runway finalist Daniel Esquivel and squeezed more than 200 people into their small school space, but they “made it work.” Another event hosted by Megan Summerville at Haven posed to be my personal favorite event of the week. She gave away more than 350 yards—15