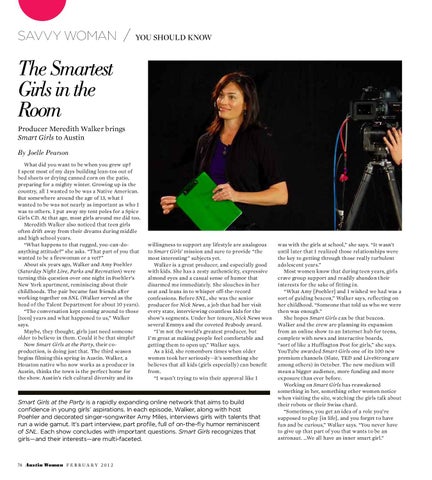 The Smartest Girls in the Room Producer Meredith Walker brings Smart Girls to Austin By Joelle Pearson What did you want to be when you grew up? I spent most of my days building lean-tos out of bed sheets or drying canned corn on the patio, preparing for a mighty winter. Growing up in the country, all I wanted to be was a Native American. But somewhere around the age of 13, what I wanted to be was not nearly as important as who I was to others. I put away my tent poles for a Spice Girls CD. At that age, most girls around me did too. Meredith Walker also noticed that teen girls often drift away from their dreams during middle and high school years. “What happens to that rugged, you-can-doanything attitude?” she asks. “That part of you that wanted to be a firewoman or a vet?” About six years ago, Walker and Amy Poehler (Saturday Night Live, Parks and Recreation) were turning this question over one night in Poehler’s New York apartment, reminiscing about their childhoods. The pair became fast friends after working together on SNL (Walker served as the head of the Talent Department for about 10 years). “The conversation kept coming around to those [teen] years and what happened to us,” Walker says. Maybe, they thought, girls just need someone older to believe in them. Could it be that simple? Now Smart Girls at the Party, their coproduction, is doing just that. The third season begins filming this spring in Austin. Walker, a Houston native who now works as a producer in Austin, thinks the town is the perfect home for the show. Austin’s rich cultural diversity and its

willingness to support any lifestyle are analogous to Smart Girls’ mission and sure to provide “the most interesting” subjects yet. Walker is a great producer, and especially good with kids. She has a zesty authenticity, expressive almond eyes and a casual sense of humor that disarmed me immediately. She slouches in her seat and leans in to whisper off-the-record confessions. Before SNL, she was the senior producer for Nick News, a job that had her visit every state, interviewing countless kids for the show’s segments. Under her tenure, Nick News won several Emmys and the coveted Peabody award. “I’m not the world’s greatest producer, but I’m great at making people feel comfortable and getting them to open up,” Walker says. As a kid, she remembers times when older women took her seriously—it’s something she believes that all kids (girls especially) can benefit from. “I wasn’t trying to win their approval like I

Smart Girls at the Party is a rapidly expanding online network that aims to build confidence in young girls’ aspirations. In each episode, Walker, along with host Poehler and decorated singer-songwriter Amy Miles, interviews girls with talents that run a wide gamut. It’s part interview, part profile, full of on-the-fly humor reminiscent of SNL. Each show concludes with important questions. Smart Girls recognizes that girls—and their interests—are multi-faceted.

was with the girls at school,” she says. “It wasn’t until later that I realized those relationships were the key to getting through those really turbulent adolescent years.” Most women know that during teen years, girls crave group support and readily abandon their interests for the sake of fitting in. “What Amy [Poehler] and I wished we had was a sort of guiding beacon,” Walker says, reflecting on her childhood. “Someone that told us who we were then was enough.” She hopes Smart Girls can be that beacon. Walker and the crew are planning its expansion from an online show to an Internet hub for teens, complete with news and interactive boards, “sort of like a Huffington Post for girls,” she says. YouTube awarded Smart Girls one of its 100 new premium channels (Slate, TED and LiveStrong are among others) in October. The new medium will mean a bigger audience, more funding and more exposure than ever before. Working on Smart Girls has reawakened something in her, something other women notice when visiting the site, watching the girls talk about their robots or their Swiss chard. “Sometimes, you get an idea of a role you’re supposed to play [in life], and you forget to have fun and be curious,” Walker says. “You never have to give up that part of you that wants to be an astronaut. …We all have an inner smart girl.” 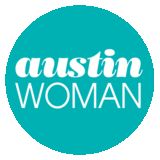