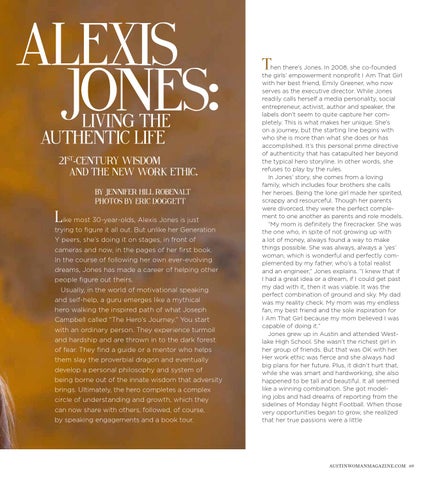 Like most 30-year-olds, Alexis Jones is just trying to figure it all out. But unlike her Generation Y peers, she’s doing it on stages, in front of cameras and now, in the pages of her first book. In the course of following her own ever-evolving dreams, Jones has made a career of helping other people figure out theirs. Usually, in the world of motivational speaking and self-help, a guru emerges like a mythical hero walking the inspired path of what Joseph Campbell called “The Hero’s Journey.” You start with an ordinary person. They experience turmoil and hardship and are thrown in to the dark forest of fear. They find a guide or a mentor who helps them slay the proverbial dragon and eventually develop a personal philosophy and system of being borne out of the innate wisdom that adversity brings. Ultimately, the hero completes a complex circle of understanding and growth, which they can now share with others, followed, of course, by speaking engagements and a book tour.

hen there’s Jones. In 2008, she co-founded the girls’ empowerment nonprofit I Am That Girl with her best friend, Emily Greener, who now serves as the executive director. While Jones readily calls herself a media personality, social entrepreneur, activist, author and speaker, the labels don’t seem to quite capture her completely. This is what makes her unique. She’s on a journey, but the starting line begins with who she is more than what she does or has accomplished. It’s this personal prime directive of authenticity that has catapulted her beyond the typical hero storyline. In other words, she refuses to play by the rules. In Jones’ story, she comes from a loving family, which includes four brothers she calls her heroes. Being the lone girl made her spirited, scrappy and resourceful. Though her parents were divorced, they were the perfect complement to one another as parents and role models. “My mom is definitely the firecracker. She was the one who, in spite of not growing up with a lot of money, always found a way to make things possible. She was always, always a ‘yes’ woman, which is wonderful and perfectly complemented by my father, who’s a total realist and an engineer,” Jones explains. “I knew that if I had a great idea or a dream, if I could get past my dad with it, then it was viable. It was the perfect combination of ground and sky. My dad was my reality check. My mom was my endless fan, my best friend and the sole inspiration for I Am That Girl because my mom believed I was capable of doing it.” Jones grew up in Austin and attended Westlake High School. She wasn’t the richest girl in her group of friends. But that was OK with her. Her work ethic was fierce and she always had big plans for her future. Plus, it didn’t hurt that, while she was smart and hardworking, she also happened to be tall and beautiful. It all seemed like a winning combination. She got modeling jobs and had dreams of reporting from the sidelines of Monday Night Football. When those very opportunities began to grow, she realized that her true passions were a little