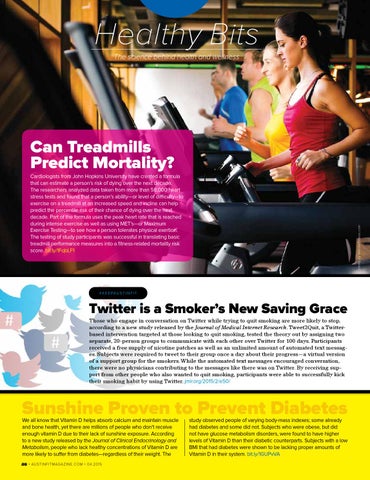 Healthy Bits The science behind health and wellness

Cardiologists from John Hopkins University have created a formula that can estimate a person’s risk of dying over the next decade. The researchers analyzed data taken from more than 58,000 heart stress tests and found that a person’s ability—or level of difficulty—to exercise on a treadmill at an increased speed and incline can help predict the percentile risk of their chance of dying over the next decade. Part of the formula uses the peak heart rate that is reached during intense exercise as well as using MET’s—or Maximum Exercise Testing—to see how a person tolerates physical exertion. The testing of study participants was successful in translating basic treadmill performance measures into a fitness-related mortality risk score. bit.ly/1FqbLF1

Twitter is a Smoker’s New Saving Grace Those who engage in conversation on Twitter while trying to quit smoking are more likely to stop, according to a new study released by the Journal of Medical Internet Research. Tweet2Quit, a Twitterbased intervention targeted at those looking to quit smoking, tested the theory out by assigning two separate, 20-person groups to communicate with each other over Twitter for 100 days. Participants received a free supply of nicotine patches as well as an unlimited amount of automated text messages. Subjects were required to tweet to their group once a day about their progress—a virtual version of a support group for the smokers. While the automated text messages encouraged conversation, there were no physicians contributing to the messages like there was on Twitter. By receiving support from other people who also wanted to quit smoking, participants were able to successfully kick their smoking habit by using Twitter. jmir.org/2015/2/e50/

Sunshine Proven to Prevent Diabetes We all know that Vitamin D helps absorb calcium and maintain muscle and bone health, yet there are millions of people who don’t receive enough vitamin D due to their lack of sunshine exposure. According to a new study released by the Journal of Clinical Endocrinology and Metabolism, people who lack healthy concentrations of Vitamin D are more likely to suffer from diabetes—regardless of their weight. The 80 • au sti nf Itm agazi ne. c o m • 04.2 015

study observed people of varying body-mass indexes; some already had diabetes and some did not. Subjects who were obese, but did not have glucose metabolism disorders, were found to have higher levels of Vitamin D than their diabetic counterparts. Subjects with a low BMI that had diabetes were shown to be lacking proper amounts of Vitamin D in their system. bit.ly/1GUPvVA 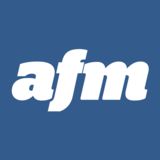 These pups beat out a field of more than 100 dogs to be named the fittest in the city. Training for Total Victory: American Ninja Warrior is...

These pups beat out a field of more than 100 dogs to be named the fittest in the city. Training for Total Victory: American Ninja Warrior is...