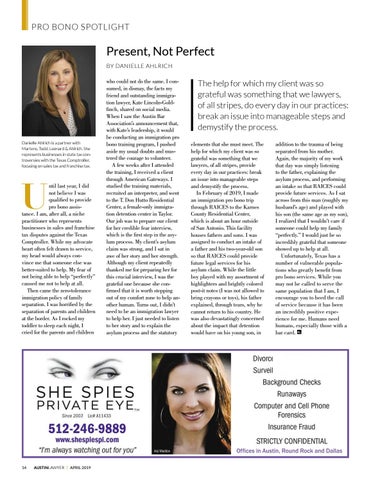 Present, Not Perfect BY DANIELLE AHLRICH

Danielle Ahlrich is a partner with Martens, Todd, Leonard & Ahlrich. She represents businesses in state tax controversies with the Texas Comptroller, focusing on sales tax and franchise tax.

ntil last year, I did not believe I was qualified to provide pro bono assistance. I am, after all, a niche practitioner who represents businesses in sales and franchise tax disputes against the Texas Comptroller. While my advocate heart often felt drawn to service, my head would always convince me that someone else was better-suited to help. My fear of not being able to help “perfectly” caused me not to help at all. Then came the zero-tolerance immigration policy of family separation. I was horrified by the separation of parents and children at the border. As I rocked my toddler to sleep each night, I cried for the parents and children

who could not do the same. I consumed, in dismay, the facts my friend and outstanding immigration lawyer, Kate Lincoln-Goldfinch, shared on social media. When I saw the Austin Bar Association’s announcement that, with Kate’s leadership, it would be conducting an immigration pro bono training program, I pushed aside my usual doubts and mustered the courage to volunteer. A few weeks after I attended the training, I received a client through American Gateways. I studied the training materials, recruited an interpreter, and went to the T. Don Hutto Residential Center, a female-only immigration detention center in Taylor. Our job was to prepare our client for her credible fear interview, which is the first step in the asylum process. My client’s asylum claim was strong, and I sat in awe of her story and her strength. Although my client repeatedly thanked me for preparing her for this crucial interview, I was the grateful one because she confirmed that it is worth stepping out of my comfort zone to help another human. Turns out, I didn’t need to be an immigration lawyer to help her. I just needed to listen to her story and to explain the asylum process and the statutory

The help for which my client was so grateful was something that we lawyers, of all stripes, do every day in our practices: break an issue into manageable steps and demystify the process. elements that she must meet. The addition to the trauma of being help for which my client was so separated from his mother. grateful was something that we Again, the majority of my work lawyers, of all stripes, provide that day was simply listening every day in our practices: break to the father, explaining the an issue into manageable steps asylum process, and performing and demystify the process. an intake so that RAICES could In February of 2019, I made provide future services. As I sat an immigration pro bono trip across from this man (roughly my through RAICES to the Karnes husband’s age) and played with County Residential Center, his son (the same age as my son), which is about an hour outside I realized that I wouldn’t care if of San Antonio. This facility someone could help my family houses fathers and sons. I was “perfectly.” I would just be so assigned to conduct an intake of incredibly grateful that someone a father and his two-year-old son showed up to help at all. so that RAICES could provide Unfortunately, Texas has a future legal services for his number of vulnerable populaasylum claim. While the little tions who greatly benefit from boy played with my assortment of pro bono services. While you highlighters and brightly colored may not be called to serve the post-it notes (I was not allowed to same population that I am, I bring crayons or toys), his father encourage you to heed the call explained, through tears, why he of service because it has been cannot return to his country. He an incredibly positive expewas also devastatingly concerned rience for me. Humans need about the impact that detention AUSTIN humans, especially those with a LAWYER L AL would have on his young son, in bar A card.

Offices in Austin, Round Rock and Dallas 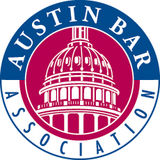