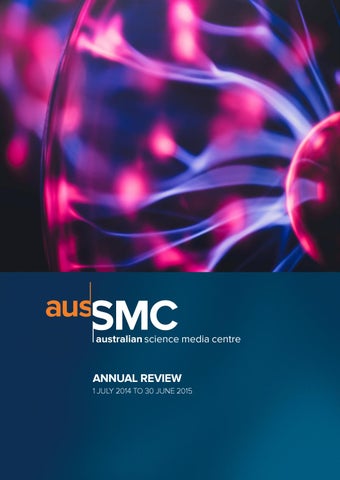 3. The year in review 4. By the numbers 5. Latest developments 8. Media snapshot 10. List of media briefings and expert reactions 13. Staff out and about 14. Board and Science Advisory Panel 16. Sponsor and Affiliates 17. Financials

Australian Science Media Centre Inc. Annual Review 1 July 2014 to 30 June 2015 Produced by: The Australian Science Media Centre Report design: AusSMC Report compiled by: Emily Erickson ÂŠThis work is copyright. Apart from any use as permitted under the Copyright Act 1968, no part may be reproduced by any process without prior written permission from the AusSMC. Cover and final page image: Public domain Image credits from top: Public domain (1&5), University of South Australia, NASA, ARC Centre of Excellence in Plant Energy Biology.

THE YEAR IN REVIEW The undisputed highlight for 2014-15 was the much anticipated launch of the Science Media Exchange (Scimex.org), the AusSMC’s hub of breaking science news, multimedia, events and expertise. It is the first of its kind in the region, designed to bring more Australian and New Zealand research to the public by connecting journalists with new research and expertise. The creation of Scimex.org involved a massive commitment of time and resources and was a collaborative effort involving the Australian and New Zealand Science Media Centres and a lot of input from journalists, scientists and research institutes. The project was supported by Inspiring Australia with significant in-kind support from Squiz and both Science Media Centres. Alongside our work on Scimex, the AusSMC was kept busy reacting to some of the biggest stories of the year – Ebola, 2014 being the warmest year on record, frozen berries with hepatitis A, Cyclones Lam and Marcia, and the catastrophic earthquake in Nepal to name a few. We also informed debate on some complex and contentious issues including the growing use of ICE, the world’s first genetic modification of human embryos, climate change, CSG, nuclear power, the WHO’s new sugar guidelines, and the NHMRC report on wind turbines and health. More on page 10. 2015 saw the official end of our successful Scientists in Residence program in which we placed 18 scientists into news rooms around the country for up to two weeks each. Media outlets included regional papers such as the Bendigo Advertiser and the Ballarat Courier; metropolitan outlets such as the SMH, The Age, The Daily Telegraph and The Courier Mail; and national outlets such as SBS, ABC and Mamamia. The program was embraced so enthusiastically by scientists and media outlets that we decided to keep it going on a smaller scale, with new residencies planned for 2015-16. All these activities were made possible through the support of the amazing organisations that fund the Australian Science Media Centre, our board, patron and AusSMC staff. Please take a look at them on pages 13-16!

BY THE NUMBERS 4,000 Australian experts on the SMC database

Over 13,000 media clips tracked to SMC briefings and reactions

2,600 enquiries from the media

1,333 journalists registered with the SMC

Approx. 2,000 stories floated to the media via SMC Picks

LATEST DEVELOPMENTS SCIMEX During 2014-15 the main focus was finalising the website for launch. During the year, the Centre worked on final design and operational aspects before inviting a number of key journalists, media officers and experts to trial Scimex. The soft launch coincided with the Centreâ&#x20AC;&#x2122;s November 2014 board meeting at Bio21 in Melbourne. The official public launch of Scimex was held at Flinders University in Adelaide in March 2015 and was attended by the then State Minister for Science, Gail Gago. The initial soft launch of Scimex at Bio21 in Melbourne in November 2014 was a wonderful event, accentuated by a stimulating panel discussion on the future of the media with Robyn Williams (ABC), Susan Greenfield (Oxford University), Alan Finkel (Vice Chancellor at Monash University), Jim Carroll (SBS) and JohnPaul Syriatowicz (Squiz). The site launched with more than 500 active journalist users and 40 institutions and spun out 850 stories in its first four months. The project is a major initiative for the Centre and is being developed in collaboration with the New Zealand Science Media Centre. The creation of Scimex was supported with grants from Inspiring Australia and the Myer Foundation together with significant in-kind support from web development company, Squiz and from the Australian and NZ Science Media Centres restructuring to make the collaboration possible.

SCIENTISTS IN RESIDENCE After two successful years, the Scientists in Residence program officially ended in June 2015. Over the two years of the program, 18 scientists completed placements in 16 newsrooms, in six states and the Northern Territory. The response from both participating news rooms and scientists has been overwhelmingly positive. During 2014-15, six scientists were placed at The Daily Telegraph, ABC, Mamamia, The Bendigo Advertiser, the Ballarat Courier and SBS/NITV. The Centre plans to keep the program going at a smaller scale with media partners ABC, SBS, Fairfax and News Corp. Professor Rob Harcourt from Macquarie University spent several weeks with the Daily Telegraph, helping to produce more than five articles on marine life, visualised with his own stunning underwater photography.

INDIGENOUS MEDIA MENTORING PROGRAM The Centre has developed a program to nurture the communication skills of a group of Indigenous early to mid-career researchers. With funding from the National Australia Bank, the Centre will develop a pilot program in 2016 in collaboration with the Wollotuka Institute at the University of Newcastle. Watch this space! Professor Lisa Jackson-Pulver, University of New South Wales collaborated with journalist Stan Grant to help produce this episode on Indigenous health practices.

We organised 35 media briefings and sent out 69 sets of expert comments throughout the year. Below is a small collection of the stories we launched or contributed to.

HIV stats update- July 2014 In August, UNSW’s Kirby Institute approached us to launch their latest surveillance report on HIV in Australia to coincide with The 20th International AIDS Conference (AIDS 2014) in Melbourne. We ran an embargoed briefing featuring three experts to launch the stats alongside two additional experts from the International Indigenous Pre-conference who presented statistics for Australia’s Indigenous communities. The breifing generated 283 media hits including SBS World News, The Age and Weekend Australian.

The roots of sex- October 2014 Flinders University engaged the services of the Centre to highlight new research that identified the origins of sexual intercourse – a discovery that meant sex began much earlier in evolutionary history than first thought. We held an embargoed briefing in the boardroom of the Science Exchange where the lead author Professor John Long had the opportunity to present his findings to journalists both in the room and online. The briefing generated 879 media hits including The Age, The Australian, Daily Telegraph and SBS World News Australia.

Have we f*#%ed the planet? - January 2015 A Swedish science communicator alerted us to Australian-led research and we decided, due to the complicated nature of the paper, journalists would benefit from hearing directly from the Australian researcher himself. On the morning the paper was published, Professor Will Steffen, lead author of the research, spoke to journalists on an online briefing explaining the paper and its findings. The briefing generated 771 media hits including The Age, Reuters, The Telegraph (UK) and New Zealand Herald. Illawarra Mercury

In the early months of 2015 we noticed an increase in the media coverage of the drug crystal methamphetamine, or ice. Issues reported included increases in violence, especially in hospitals, and increased drug use spreading across rural Australia. Not long after the Federal Government announced a national taskforce to tackle the scourge of ice use, we brought together three experts in the fields of addiction and emergency medicine. The briefing generated 287 media hits including the Fairfax Rural Press network, Agence France Presse and The Advertiser.

Fireball over Australia - July 2014 On the evening of Thursday July 10 a large fireball was seen shooting through the sky over parts of Eastern Australia. Later reports indicated it was a piece of a Russian Soyuz rocket stage that launched a satellite earlier in the week. We collected a comment from a Melbourne-based astronomer and distributed it to journalists first thing the following morning. The expert reaction generated 221 media hits including The Sydney Morning Herald and Yahoo!7 News.

Increased Alzheimer’s risk - September 2014 A French and Canadian study released in September reported that taking benzodiazepines - widely prescribed drugs to treat anxiety and insomnia - was associated with an increased risk of developing Alzheimer’s disease. We released an independent comment from an Australian expert and distributed it to journalists under embargo, alongside comments collected by the UK SMC. This expert reaction generated 195 media hits including The Nine Network, AAP, Yahoo! New Zealand and The Advertiser.

Third warmest year - January 2015 At the beginning of the year the Bureau of Meteorology confirmed 2014 had been Australia’s third hottest year on record and that seven of Australia’s ten warmest years had occurred in the 13 years since 2002. Shortly after the announcement we released three expert comments to journalists reacting to the Bureau’s news. The reaction generated 252 media hits including Channel 7 Sydney, Australian Financial Review and the Times UK. Channel 7 Sydney

Are sugar and carbs behind obesity?– April 2015 In late April, three international scientists claimed sugar and carbohydrates, and not a lack of exercise, were to blame for the global surge in obesity. We collected comments from a number of nutritional experts across the country to see if the claims stacked up. The expert reaction generated 44 media hits including The West Australian, The Courier-Mail, The New Zealand Herald and ABC Lateline.

LIST OF MEDIA BRIEFINGS AND EXPERT REACTIONS The following is a full list of the media briefings (blue) and expert reactions the Science Media Centre organised over the past year. The title in brackets shows the scientific journal the study was published in. Collectively they generated over 13,000 media hits in Australia and overseas.

Experimental drug for Ebola (Nature*) WHO report criticises e-cigarettes Antidepressants during pregnancy may be linked to ADHD in kids (Molecular Psychiatry*) Earthquake in California Stem cells: the potential, the reality and the scams Ineffective superbug control in hospitals (The Lancet*) Rewriting ancient history: the origins of Egyptian mummies (PLOS ONE) PSA testing risks and benefits (The Lancet*) Ebola: is Australia next?

Gold and white (or is it blue and black?) dress conundrum Cyclone Lam and  Cyclone Marcia Tsunami advisory issued for Iwate Prefecture following 6.9 magnitude earthquake off coast of Japan Frozen berries contaminated with hepatitis A Academy throws its weight behind climate science Past, present and future of bushfires and disasters Health impacts of wind farms – release of NHMRC statement UK MPs vote to allow mitochondrial DNA transfer, labelled ‘three-person IVF’ by the press The science behind the death penalty

AUSSMC STAFF The AusSMC went through a couple of changes between July 2014 and June 2015. We said goodbye to our Executive Assistant, Karen Noble in July, and welcomed Support Officer, Emily Erickson and Science Information Officer, Ben Kaldi. At June 2015, the AusSMC staff consisted of: • • • • • • • • • •

AusSMC in the media Along with a number of other media interviews the staff participated in, Susannah and Joe continued their involvement with the Research Filter segment on RN Drive, hosted by Patricia Karvelas. AusSMC staff are on air about twice a month, and are a part of a weekly slot where science communicators discuss interesting science stories that have been in the media recently. The interviews can be found at http://www.abc.net.au/ radionational/programs/drive.

BOARD MEMBERS The AusSMC Board, chaired by Peter Yates AM, meets four times a year. Deputy chairs are Robyn Williams from the ABC and Merlin Crossley, Dean of Science at UNSW. Board members at 30 June 2015 were:

All support is capped at 10% of the AusSMC’s budget to maintain the Centre’s independence. The AusSMC is grateful to the following supporters during 2014-2015. 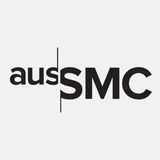