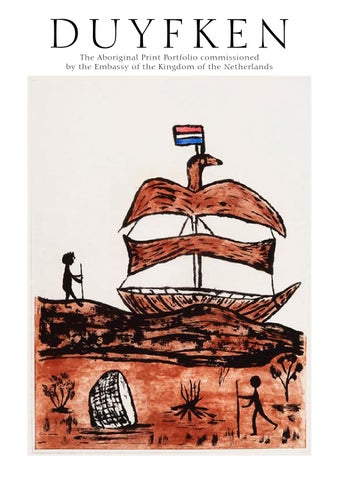 Karen Casey Born 1956, Hobart, Tasmania Lives in Melbourne, Victoria The Record Keepers Photo-lithograph in one colour, printed from one CTP off-set photo-litho plate Image developed by the artist in Photoshop and printed by Martin King at Australian Print Workshop, 2006 Image size: 40 x 54cm Paper size: 56 x 76cm From the ancient practice of hand-stenciling to the elaborate science of cartography, human beings possess an innate desire to record and chart their arrivals and journeys through life. Drawing from Abel Tasman’s 1642 expedition journal and on the cave art signatures of my Tasmanian forebears, this work responds to both the spirit of exploration and discovery, and to the enduring sense of connection one has with one’s country and place of origin. Like the contours of the explorers’ maps, the tracings and imprints of clasped hands reveal the passage of time, metaphorically uniting peoples of different cultures through the myriad of life’s experience, each existing within a particular geographic location and each with a story to tell.

Dulamari (Djalinda Yunupingu) Born 1954, north east Arnhem Land Lives in north east Arnhem Land, Northern Territory Gumatj clan Gawarrk (Woman turned into rock) Linocut in two colours, printed from two blocks Drawn and cut on the blocks by the artist and printed by Rosalind Atkins at Australian Print Workshop, 2006 Image size: 40 x 60cm Paper size: 56 x 76cm Nobody knows where the miyalk (woman) named Gawarrk came from. She wasn’t Macassan, European or Yolngu (Aboriginal). She was from an unknown people. She swam from Dhambaliya (Bremer Island) where my family lives now, towards Gutjangan, our homeland, to Banupanuwuy and then to Bolulawuy, where the barge landing is now. Here she danced with the two swords which broke when she hit them together. The swords fell into the water and the miyalk turned into the rock called Gawarrk. The dance that Gawarrk did on the beach with the swords is done in Yirritja Ceremonies today. Some of the places at Dhambaliya are Yirritja, but mostly Dhuwa land and sea. The anchor indicates that Dhambaliya has abundant freshwater.

Allan Mansell Born 1957, Tasmania Lives on Bruny Island, Tasmania i Hard-ground etching in three colours, printed from two copper plates Drawn on the plates by the artist and printed by Warren Cooke at Australian Print Workshop, 2006 Image size: 60 x 45cm Paper size: 76 x 56cm The leaves represent Tasmania where there are more varieties of gum trees than anywhere else in Australia. Within each leaf is the gum tree itself, as in the veins of the eyelid. The circles represent harmony. The inner circle symbolises contact between the Dutch and Tasmanian Aboriginal people. As they did not meet physically, contact was through sight: the upper eye sees Dutch ships; the lower eye sees the Tasman Bridge (in Hobart) as a symbol of the bridge between the Dutch and Aboriginal people. The colour within the leaves is that of the earth. The blue in the eyes refers to Europeans and blue is symbolic of the upper classes in history as blue was a precious pigment.

Dhuwarrwarr Marika Born c.1946, north east Arnhem Land Lives in north east Arnhem Land, Northern Territory Rirratjingu clan The Macassan prahu Linocut in one colour, printed from one block Drawn and cut on the block by the artist and printed by Rosalind Atkins at Australian Print Workshop, 2006 Image size: 40 x 60cm Paper size: 56 x 76cm For some 300 years, until the beginning of the twentieth century, Macassan fishermen from what is now Sulawesi in Indonesia used to sail to the northern shores of Australia every monsoon season to collect sea cucumbers (trepang). They introduced metal to the Yolngu (Aboriginal people of eastern Arnhem Land) as well as words which are still in use today: the Yolngu word for ‘outsider’ is balanda, a variation on the word ‘Hollander’. The prahu, with its distinctive sails and two rudders, is shown with its crew, the cargo of sacks of rice, trepang, and swords and axes. The background design is the Rirratjingu clan design for water.

Janice Murray Born 1966, Melville Island Lives in Milikapiti, Melville Island, Northern Territory Tiwi language Jilamara Hard ground etching and aquatint printed in three colours, printed from two copper plates Drawn on the plates by the artist and printed by Martin King at Australian Print Workshop, 2006 Image size: 40 x 59cm Paper size: 56 x 76cm Jilamara is a Tiwi word that means ‘design’ or ‘pattern’. This is a pattern from the Pukumani burial ceremonies the Tiwi have performed ever since the ancestor Purukuparli died millennia ago, and the first burial ritual took place. Janice’s traditional country at Tinganu (Impinari) is where these ancestral events occurred: Purukuparli’s footprint is still there.

Garry Namponan Born 1960, Aurukun Lives in Aurukun, west Cape York, Queensland Apelech clan Untitled Hard-ground etching in two colours, printed from one copper plate with colour roll up Drawn on the plate by the artist and printed by Martin King at Australian Print Workshop, 2006 Image size: 59 x 44cm Paper size: 76 x 56cm The dog belongs to my grandmother’s story place. The brolga is my grandmother’s totem. The eagle is the totem in the Archer River, near my country. The name of the eagle in WikMungkan is Kang Kang. The dugong belongs to a story place off the coast at the mouth of the Love River. The designs on the figures are those painted onto people’s bodies in ceremony, and onto sculptures.

Chris Pease Born 1969, south coast of Western Australia Lives in Perth, Western Australia Minang / Nyoongar language Thoughts on first contact Lithograph in two colours, printed from two aluminium plates Drawn on the plates by the artist and printed by Martin King at Australian Print Workshop, 2006 Image size: 40 x 60cm Paper size: 56 x 76cm I thought of the Dutch vessels and the idea of the wooden hulls containing and protecting the sailors from the harsh environment outside. The hull, and in particular the ribs of a ship, protect the lives within, just as the ribs of an animal protect its organs. Dutch ship-building during the seventeenth century was in its prime. In contrast to this technology, the ships sailed into primeval territory. In 1621 the Leeuwin came into contact with Nyoongar boodja (land), home to the humpback whale, the southern giant petrel and of course the Nyoongar people. My research into the Dutch voyages has parallels with much of the research I have undertaken on my own people: the gathering together of pieces of information to construct a complete picture.

Leonie Pootchemunka Born 1962, Aurukun Lives in Aurukun, west Cape York, Queensland Apelech and Winchanam clans Moon Sisters Story Linocut in two colours, printed from two blocks Drawn and cut on the blocks by the artist and printed by Rosalind Atkins at Australian Print Workshop, 2006 Image size: 40 x 60cm Paper size: 56 x 76cm Two sisters of the Winchanam clan were going hunting for turtles etc. Next minute they came across a river (the Archer River), looking for lily roots. They thought they saw a big barramundi swimming but it was the moon who took the two ladies away from our people. At Ti-tree there is a hollow where the moon took the two women. When it is full moon you can see the women in the moon. This is a true story; everybody knows that.

Pedro Wonaeamirri Born 1974, Melville Island Lives in Milikapiti, Melville Island, Northern Territory Tiwi language Yirrinkiri Jilamara Lithograph in three colours, printed from three aluminium plates Drawn on the plates by the artist and printed by Martin King at Australian Print Workshop, 2006 Image size: 60 x 45cm Paper size: 76 x 56cm This is a design from our Pukumani burial ceremonies: it is the pattern we paint on tutini or grave posts. We have conducted these ceremonies for centuries, well before the Dutch first came to Melville Island 300 years ago. It is hard for us to imagine how far those first Dutch sailors had to travel to get here, but when they got here my people were already doing Pukumani.

the PROJECT The Embassy of the Kingdom of the Netherlands’ commemoration of the 400th anniversary of Dutch-Australian relations is realised in a unique way through a collaboration with Australian Print Workshop (APW), one of the most prominent art print workshops in Australia. From the 4th to the 8th of July 2006, ten of Australia’s most talented and emerging Indigenous artists came together in Fitzroy, Melbourne, to take part in a printmaking workshop conducted by APW. The artists came from far a field, from Melville Island, Arnhem Land, Cape York, Western Australia and Tasmania. The theme of the set of prints is ‘first encounters’ and the title of the portfolio is derived from the name of the first Dutch ship to land on Australian shores, the Duyfken.

cover: Laurel Nannup Born 1943, Carrolup, south Western Australia Lives in Perth, Western Australia Binjareb / Nyoongar language Old Spirit of the Sea Lift-ground, aquatint and spit-bite etching in two colours with hand colouring, printed from two copper plates Drawn on the plates by the artist and printed by Martin King at Australian Print Workshop, 2006 Image size: 60 x 40cm Paper size: 76 x 56cm The Duyfken in 1606 was the first ship to sail to what is now called Australia. Commander Willem Janszoon sailed down south of the west coast of Cape York for 200 miles. The sailors’ first encounter with the Aboriginal people was not friendly, the crew was attacked and being short of supplies Janszoon decided to turn back. One could only guess what the Aboriginals thought when they saw the big white sails of the Duyfken; the sails would have looked like a big white bird, and the sailors, being white, would have made the Aboriginal people think it was their ancestors’ spirits coming back from the dead.

DUYFKEN The Aboriginal Print Portfolio commissioned by the Embassy of the Kingdom of the Netherlands to commemorate 400 years of Dutch contact with Australia In March 1606 the Dutch East India Company vessel Duyfken (Little Dove) landed on the west coast of Cape York Peninsula. Captain Willem Janszoon and his men went ashore to explore the area. First contact with Australia, its land and its people, was made. In 2006, 400 years later, that first landing was celebrated with a year of commemorative events in both the Netherlands and Australia. To acknowledge the special role of the Aboriginal peoples of Australia in the early contacts with the Dutch, a number of Indigenous Australian artists, chosen from the regions visited by the Dutch, have been given the opportunity to produce a permanent record of the commemoration and thereby gain valuable new experiences. The results thereof are to be found in this portfolio of wonderful prints. Income generated from the sale of the portfolios will flow back to the artists and communities concerned. This project would not have been possible without the help of our four sponsors. I would like to thank them for their generosity. My gratitude also goes out to Anne Virgo and Australian Print Workshop in Melbourne for their expertise and assistance in making the prints possible, as well as to the coordinator of the project, Wally Caruana. Last but not least, my heartfelt â&#x20AC;&#x2DC;thank youâ&#x20AC;&#x2122; to the artists themselves for their enthusiasm and cooperation. Niek van Zutphen Ambassador of the Kingdom of the Netherlands