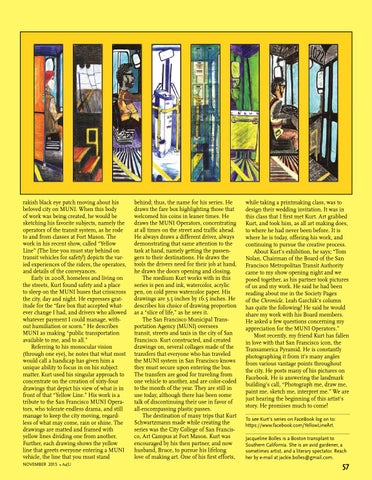 rakish black eye patch moving about his beloved city on MUNI. When this body of work was being created, he would be sketching his favorite subjects, namely the operators of the transit system, as he rode to and from classes at Fort Mason. The work in his recent show, called “Yellow Line” (The line you must stay behind on transit vehicles for safety!) depicts the varied experiences of the riders, the operators, and details of the conveyances. Early in 2008, homeless and living on the streets, Kurt found safety and a place to sleep on the MUNI buses that crisscross the city, day and night. He expresses gratitude for the “fare box that accepted whatever change I had, and drivers who allowed whatever payment I could manage, without humiliation or scorn.” He describes MUNI as making “public transportation available to me, and to all.” Referring to his monocular vision (through one eye), he notes that what most would call a handicap has given him a unique ability to focus in on his subject matter. Kurt used his singular approach to concentrate on the creation of sixty-four drawings that depict his view of what is in front of that “Yellow Line.” His work is a tribute to the San Francisco MUNI Operators, who tolerate endless drama, and still manage to keep the city moving, regardless of what may come, rain or shine. The drawings are matted and framed with yellow lines dividing one from another. Further, each drawing shows the yellow line that greets everyone entering a MUNI vehicle, the line that you must stand NOVEMBER 2015 • A&U

behind; thus, the name for his series. He draws the fare box highlighting those that welcomed his coins in leaner times. He draws the MUNI Operators, concentrating at all times on the street and traffic ahead. He always draws a different driver, always demonstrating that same attention to the task at hand, namely getting the passengers to their destinations. He draws the tools the drivers need for their job at hand, he draws the doors opening and closing. The medium Kurt works with in this series is pen and ink, watercolor, acrylic pen, on cold press watercolor paper. His drawings are 3.5 inches by 16.5 inches. He describes his choice of drawing proportion as a “slice of life,” as he sees it. The San Francisco Municipal Transportation Agency (MUNI) oversees transit, streets and taxis in the city of San Francisco. Kurt constructed, and created drawings on, several collages made of the transfers that everyone who has traveled the MUNI system in San Francisco knows they must secure upon entering the bus. The transfers are good for traveling from one vehicle to another, and are color-coded to the month of the year. They are still in use today, although there has been some talk of discontinuing their use in favor of all-encompassing plastic passes. The destination of many trips that Kurt Schwartzmann made while creating the series was the City College of San Francisco, Art Campus at Fort Mason. Kurt was encouraged by his then partner, and now husband, Bruce, to pursue his lifelong love of making art. One of his first efforts,

while taking a printmaking class, was to design their wedding invitation. It was in this class that I first met Kurt. Art grabbed Kurt, and took him, as all art making does, to where he had never been before. It is where he is today, offering his work, and continuing to pursue the creative process. About Kurt’s exhibition, he says; “Tom Nolan, Chairman of the Board of the San Francisco Metropolitan Transit Authority came to my show opening night and we posed together, as his partner took pictures of us and my work. He said he had been reading about me in the Society Pages of the Chronicle. Leah Garchik’s column has quite the following! He said he would share my work with his Board members. He asked a few questions concerning my appreciation for the MUNI Operators.” Most recently, my friend Kurt has fallen in love with that San Francisco icon, the Transamerica Pyramid. He is constantly photographing it from it’s many angles from various vantage points throughout the city. He posts many of his pictures on Facebook. He is answering the landmark building’s call, “Photograph me, draw me, paint me, sketch me, interpret me.” We are just hearing the beginning of this artist’s story. He promises much to come! To see Kurt’s series on FaceBook log on to: https://www.facebook.com/YellowLineArt. Jacqueline Bolles is a Boston transplant to Southern California. She is an avid gardener, a sometimes artist, and a literary spectator. Reach her by e-mail at jackie.bolles@gmail.com. 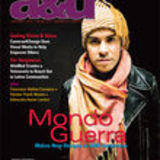 Covery Story: Jonathan Groff THE ACTOR IS LOOKING TOWARD A WORLD FREE OF HIV STIGMA _____ Heart-Shaped World GREG WILSON ADVOCATES FOR US T...

Covery Story: Jonathan Groff THE ACTOR IS LOOKING TOWARD A WORLD FREE OF HIV STIGMA _____ Heart-Shaped World GREG WILSON ADVOCATES FOR US T...