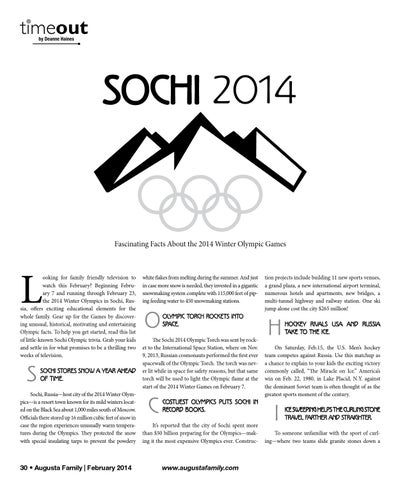 ooking for family friendly television to watch this February? Beginning February 7 and running through February 23, the 2014 Winter Olympics in Sochi, Russia, offers exciting educational elements for the whole family. Gear up for the Games by discovering unusual, historical, motivating and entertaining Olympic facts. To help you get started, read this list of little-known Sochi Olympic trivia. Grab your kids and settle in for what promises to be a thrilling two weeks of television.

Sochi stores snow a year ahead of time.

Sochi, Russia—host city of the 2014 Winter Olympics—is a resort town known for its mild winters located on the Black Sea about 1,000 miles south of Moscow. Officials there stored up 16 million cubic feet of snow in case the region experiences unusually warm temperatures during the Olympics. They protected the snow with special insulating tarps to prevent the powdery

white flakes from melting during the summer. And just in case more snow is needed, they invested in a gigantic snowmaking system complete with 115,000 feet of piping feeding water to 450 snowmaking stations.

The Sochi 2014 Olympic Torch was sent by rocket to the International Space Station, where on Nov. 9, 2013, Russian cosmonauts performed the first ever spacewalk of the Olympic Torch. The torch was never lit while in space for safety reasons, but that same torch will be used to light the Olympic flame at the start of the 2014 Winter Games on February 7.

It’s reported that the city of Sochi spent more than $50 billion preparing for the Olympics—making it the most expensive Olympics ever. Construc-

Hockey rivals USA and Russia take to the ice.

On Saturday, Feb.15, the U.S. Men’s hockey team competes against Russia. Use this matchup as a chance to explain to your kids the exciting victory commonly called, “The Miracle on Ice.” America’s win on Feb. 22, 1980, in Lake Placid, N.Y. against the dominant Soviet team is often thought of as the greatest sports moment of the century. 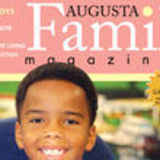