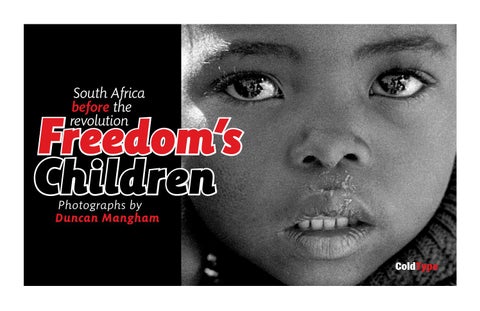 South Africa before the revolution

he early to mid-1970s were perhaps the best time to be a white immigrant from Britain to South Africa. The country offered an idyllic climate, great wages, wonderful food – and servants to do all the housework. Downside? No TV – it wasn’t introduced until 1976. And there was that little matter of apartheid, under which the country’s black majority was subjugated by its white masters, becoming second- or third-class citizens in their own country; kept out of cities by iniquitous pass laws, herded into barren homelands miles away from civilisation, educated to be servants and labourers. It was, as one writer so elegantly put it, Cloud Cuckoo Land: White Utopia, Black Hell. Unrest was brewing . . . and everything was about to be changed by a generation of schoolchildren who took to the Soweto streets in 1976 and set the revolutionary train in motion. This was the world in which Duncan Mangham found himself in 1972 when, fed-up with increasing industrial unrest in Britain, the Yorkshire artist decided it was time for a break. This is his story . . . ---------------“England had become a farce: the attitude seemed to be, ‘whose turn is it to strike this week?’ So, in 1972, I got out. Taking advantage of the South African government’s assisted passage scheme, I left a ‘constipated country’ and boarded a jumbo jet for a new life. “Within three hours of arriving in Joburg I was offered an exhibition at one of the city’s leading art galleries. Wow, this is the life, I thought, convinced I’d soon become rich and famous. But there was a problem. I’d recently seen an exhibition of the dreamlike, hyper-reality work of Derbyshire artist Mike Worrall at London’s Piccadilly Gallery, which prompted me to change direction in my painting from abstract to realism. “When the director of the Joburg gallery came to check the progress of my new work for the exhibition, he was aghast and insisted I revert to the style he’d seen in my portfolio. That, he said, was what he could sell and it would earn big bucks for both of us. But I didn’t feel like revisiting old ground, so I declined. With hindsight, it was maybe a foolish decision as I didn’t have two cents to my name at the time. “I began taking photographs of Africans, to use as sketches for my paintings, while walking to my job of

teaching English to foreign students. Realising that the photographs spoke for themselves and didn’t need to be translated to canvas, I set up my first darkroom in my apartment right in the heart of the city’s vibrant night scene. “Later, I became a sales rep for Minolta cameras and travelled throughout the country, which allowed me to take photographs in rural communities. However, that became a bit scary after the Soweto riots of 1976 when violence started to break out in the townships, and many people objected to being photographed by a longhaired, bearded, white guy. (The younger ones always loved having their photos taken, of course). “Eventually, as the anti-government violence increased, I decided to return to England in 1977 to ‘settle down’, something I’m still not sure I’ve managed 40 years later! Now, when I look back at those old photographs I sometimes wonder what happened to the people in them – especially the youngsters, many of whom would have played an active role in the fight to end apartheid.” ---------------Looking back over the 40 years since these photographs were taken, the reader must wonder when the next revolution will take place. Yes, the evil of apartheid has been eliminated. South Africa has political equality and the country is still beautiful, but it seems that the revolution that freed Nelson Mandela and installed new black leaders has left much of the population as poor and impoverished as they ever were; still second class citizens. The children in these photographs were the generation that fought for a new and better life. Most of them are still awaiting the future that was promised but has yet to arrive. – Tony Sutton ---------------1976 (facing page): “Emma, the lady who cleaned my flat, was fascinated by all the pictures on the walls. We spoke about her kids. Two were teenagers, but she had little Stanley living with her, so I asked if she’d like me to take his picture. Her eyes lit up - it was a wonderful moment; you’d have thought she’d won the lottery! She brought him in his best clothes to my flat the next day, then went off to work in a neighbouring flat while I photographed him. I wonder how he made out in life? I don’t think he could have had a better start with a mom like that and I really hope both did well in the new South Africa.”

1975 (below): “The Australian girl I lived with was leaving for London and wanted to see Soweto. I had been there a couple of years earlier but this time we went on a tour organised by the Joburg Municipality, which was obviously designed to show Soweto in the best possible light – photographs were allowed only in selected locations en route - but that was no real problem if you had a telephoto in your girlfriend’s handbag! This shot was taken at a “show school“ and my camera caught the eye of this little chap, who smiled and gave me a Winston Churchill salute.”

1975 (facing page): “This shot was, perhaps, a more accurate reflection of the times; a tin hoop and wire are prized toys, the youngster has a sadder face and a ragged jumper – but still the peace sign.”

1974 (below): “I took this shot from my balcony one Sunday morning just after the Salvation Army band had woken the entire neighbourhood with their raucous hymns, sung to the accompaniment of Australian-accented shouts from the surrounding flats, of ‘Why don’t you stick your fucking trumpets up your fucking assholes; we’re trying to sleep up here.’ The mat sellers weren’t happy when I told them I really would have liked to have bought one of their tremendous mats but I had nowhere to put it. ‘What’s wrong with the wall?’ they asked. Too many pictures, that’s what!”

1977 (facing page): ”This is Suzette, a hauntingly-beautiful six-year-old polio victim who I found sitting on the pavement outside a superstore on Joburg’s main drag, Eloff Street. By this stage I’d switched from sneaking photographs using my long lenses to a shorter portrait lens. I always chatted to the people I was photographing, getting their names and ages, and I always gave them some money. Almost 40 years later, Suzette and all the other children I photographed will now be middle aged. I often wonder what became of them.”

1972 (below): “Roger Senior was a fellow Yorkshireman who turned cartwheel hubs into table lamps. He cleaned them up, fitted a base and a top, while his wife made batik lampshades to go with them. They sold them to an expensive boutique in Sandton, a rich white suburb of Joburg. Roger had found a source of these hubs via his gardener, Philip, who came from Belsfontein, a village about 250 miles north of Joburg, and it was there that we travelled to pick up a shipment. Here, Philip’s four nieces pose for my old Zenit camera with the village pump in the background.”

1972 (facing page): “That’s Philip in the background hammering away at a wheel hub. The sons of Mr. Machau, the village blacksmith, are laughing at their bare-arsed younger brother as he climbs on to a cart.”

1975 (below): “The little girl was on holiday from the UK with her parents. This was probably the first time these black schoolkids had been so close to a white child and they were fascinated by her. Still, thinking back to 1975, this could also have been the first time the English girl had been in the company of black kids.”

1973 (facing page): ”This picture of a young girl was taken at Zoo Lake on the outskirts of Joburg at the monthly ‘Artists Under the Sun’ exhibition. Starting in 1960 and held over the first weekend of the month, this outdoor exhibition gives a multitude of local artists the chance to display and sell their work. It is still going strong after 54 years.”

1975: “I worked for a time at the Highpoint branch of Etkinds’ photographic and hi-fi store in Hillbrow, Johannesburg. The big excitement in June 1975 when this picture was taken was the forthcoming launch of TV, which the Afrikaner government had previously opposed. We ran videos all day to help sell the sets and the kids from the neighbouring high rise apartments used to come to watch the cartoons. However, it was unusual to get black children in the store. Anyway, this little guy walked in and I just waited for the moment he first saw the cartoon characters walk across the TV screen . . . ”

The Photographer: Duncan Mangham is a photographer and songwriter, from Mexborough,South Yorkshire. He lived in South Africa from 1972-1977, when he returned to Britain. After spending some time in London, he returned to Yorkshire where he set up his photographic studio, ‘In Camera’, specialising in wedding photography. An exhibition of his South African work was held at Doncaster Art Gallery in 1995. He retired in 2011 and is currently working on digitising his archive.