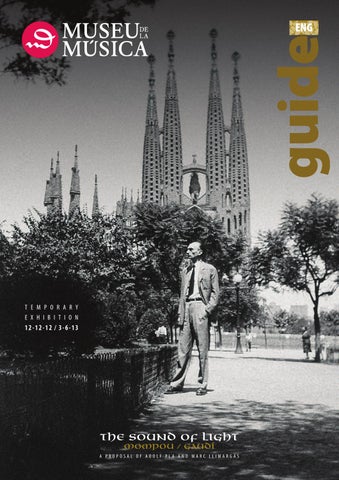 chi tec t ure creates spaces of silence. Music is born in silence. Through the harmonic resonance of Música callada and Charmes, Mompou invites us to listen to the voice of silence... and we can imagine no more sonorous architecture than that of Gaudí. We propose this space as a sensitive dialogue of images, sounds and words of these two “masters of the art of the future”. Adolf Pla and Marc Llimargas

Museu de la Música presents a project of the musician Adolf Pla and the photographer Marc llimargas in connection with two great figures of catalan art: the musician and composer frederic Mompou and the architect Antoni gaudí. Jointly, two contemporary creators contemplate the past. Pla has studied and interpreted Mompou’s work, whereas llimargas has reflexively photographed the works of gaudí. The meeting of Pla and llimargas gives rise to a dialogue on the creative elements shared by Mompou and gaudí. frederic Mompou (1893-1987) belonged to the generation of musicians of the early decades of the 20th century and lived in the diﬃcult years of the war and post-war period. gaudí (1852-1926) lived during the Renaixença (the catalan Rebirth period) and he is the foremost exponent of the catalan architectural Modernisme, having worked in the closing decades of the 19th century and the opening decades of the 20th. despite their having belonged to diﬀerent generations and cultural contexts, and although they devoted themselves to diﬀerent artistic disciplines, they shared the city of Barcelona and the Mediterranean light. Pla and llimargas, through an artistic rather than a discursive proposal, show us the surprising links they have discovered between the two great creators, in both their conception of art and in their sources of inspiration. Mompou forms the guiding thread of the exhibition. Through his personal documents, provided by courtesy of the frederic Mompou foundation, with some materials never before displayed, the Museum presents a preliminary biographical space shedding light on the musician’s personality and work. from that point on, images, musical scores, graphisms and aphorisms invite visitors to take a suggestive look at Mompou’s and gaudí’s aesthetic worlds. Museu de la Música —2—

BIOGRAPHY frederic Mompou i dencausse was born on 16 April 1893 in Barcelona’s Paral·lel district. Although possessing the talent required to become a pianist, in 1909 he turned his attention to composition, fascinated by a concert of gabriel fauré and Marguerite long in Barcelona. Over the course of two years, he worked out the foundation of his music in a harmonic sonority: the metallic chord. In 1911 he finished his first piece, Impressions íntimes, and took up residence in Paris until 1914. With the outbreak of World War I, he returned to Barcelona, where he remained until 1921, composing there a large part of his most emblematic works: Cants màgics, Charmes, Fêtes lointaines… In 1921 he went back to Paris to show this music to his piano teacher, ferdinand Motte-lacroix, who premiered it to warm praise from the critic Émile Vuillermoz. Mompou was especially creative in the 1920s, composing his first Cançons i danses, Preludis and songs for voice and piano. In the 1930s he suffered a severe creative crisis, producing very few compositions. He returned to Barcelona under the circumstances stemming from the war in 1941 and stayed there the rest of his life. In that same year he met carmen Bravo, who would become his wife seventeen years later. In this period he started off on new paths of composition that were increasingly serene and austere. By 1951 he had completed the first book of Música callada, his masterpiece, and in 1967 he finished the last of the four books. In 1957 he completed his most virtuosic work, Variacions sobre un tema de Chopin, and in 1963 he composed his only symphonic-choral work, Improperios. In 1978 he composed his last piece, La vaca cega, a song with a text by the great poet Joan Maragall. frederic Mompou died on 30 June 1987. Museu de la Música

Interactive I don’t think music, I just convey it. I have a clear conscience.

frederic Mompou had an introverted and reflexive personality and perceived his world with great intensity. from a very early age he showed an interest in the great questions of philosophy and was very open-minded, becoming fascinated by the thought of the Oriental cultures. Mompou’s music originated before it came to manifest itself in thought. In this sense, it may be qualified as “original”, the fruit of a conscious flowing.

Opposites Are the two opposite elements: a) brightness-darkness b) light-shadow two origins...? Or is one the consequence of the other?

Eternity from the moment the first vibration began in dark empty space, until the moment we assume that immobility will return to the darkness: are this beginning and this end, this life and death the limits of eternity? If nature teaches us that everything rebegins, it may also be believed that this beginning and end, this eternity assumed by our poor imagination, is only a period of eternity.

Intelligence will always be immersed in the doubt between two opposite truths. Mompou

There are two types of happiness: joy and sadness, although few people understand the latter. Mompou

Manuscript of Mompou (1910) Barcelona, coastline industry (1918) Metallic chord The metallic chord is when something transcendental occurs in me, the instant in which it appears from my fingers: this chord, obstinately repeated, revealed to me a world of sound within a metallic atmosphere. An atmosphere like the one that enveloped my entire childhood, tied to the bell foundry and later to the industrial areas that I saw and felt on my walks in Barcelona’s surroundings and especially in the coastline areas. Mompou

What is Mompou’s metallic chord? It is a symbol of the union of opposites: consonance with dissonance and symmetry with asymmetry. This union brings us to a very subtle vibratory space that transports us to a diﬀerent state of consciousness and fluidity. The magical attracts us by its connection between reality and irreality. In this way, this chord formed by sound vibrations in opposites conveys to us the experience of feeling magic. All my music lies in this chord. Mompou —7—

Consonances opposed by the tritone

Opposite dissonances of tone and half tone

Mompou and his goddaughter, Elisenda Janés (1955)

Rebeginning I feel the music of the little path in the mountains. I make this music because art has reached its limit... Art is a return to the primitive. No, it is not a return... it is a rebeginning. It is a rebeginning with all that we have come to know.

When I smell a flower I don’t think about how it was cultivated. That’s how I like to listen to my music. Mompou

Originality consists of returning to the origin. Gaudí

Apparent primitivism. The new starting point is ideal and it is situated in our times. Our cave faces the future with clean walls. Mompou

The beauty of matter in a composition that isn’t one One day in Paris, Mompou received the visit of the musicologist José Bruyr. On opening the door, when the visitor asked him if he was the composer Mompou, frederic answered: “Je ne suis pas un compositeur! Je ne suis qu’une ‘musique’ et une musique la moins composée du monde”. (“I am not a composer! I am just a ‘music’ and indeed the least composed music in the world”.) Mompou identified himself as a musician – the person who intuits or receives music – in contrast to a composer – the person who builds and is capable of erecting an imposing symphony with a handful of notes.

The sun is the great painter of the Mediterranean lands. Gaudí

The great book that is always open and that we must strive to read is that of Nature. Gaudí — 10 —

The gypsy Chatuncha and Mompou, ca. 1916

Cants màgics, 1919 Aglaia, Enric Monjo, 1950. Aglaia is the symbol of intuition and creativity.

Thought works only in silence. Mompou

Translating the past Mompou’s capacity of dematerialising music causes it to reach us, magically, with all its substance. When he uses a folk melody, he expresses its essence, an essence that keeps flowing in all his music. Mompou also brings in tradition, drawing close to medieval music in order to reach the primaeval sounds, just as gaudí turns to gothic, Byzantine and greek architecture to recognise the architecture of nature.

Each man, with his pride, is the centre of his homeland. Mompou — 12 —

Tradition governs us, guides us and leads us.

We have to be synthetic. Gaudí

MASTERS OF THE FUTURE

The realisation of a thing consists of making its law accord with the law of Creation. Gaudí The artist is a magnificent servant of art. He is just a humble intermediary between the Creator and the work. Mompou

MASTERS OF THE FUTURE

The tranquil night at the approaches of the dawn, the silent music, the sonorous solitude, the supper which revives and enkindles love. Spires of the Sagrada Família&#39;s bell towers

Saint John of the Cross

MASTERS OF THE FUTURE Masters of the future Architecture creates silences. Music is born in silence. few silences are as sonorous as gaudí’s. No music is exactly the selfsame voice of silence. Or perhaps only Mompou’s music is. The world’s biggest musical instrument

gaudí conceived the sagrada família church as a musical instrument... as an immense instrument with 12 bell towers containing 7 tubular bells each, for a total of 84 bells, like an enormous piano keyboard, so that the church’s voice would be heard throughout Barcelona.

MASTERS OF THE FUTURE Wisdom is greater than science. Gaudí

Music is the repose of the seventh day of Creation. Mompou

Guide exhibition "The sound of light. Mompou / Gaudí". By Adolf Pla and Marc Llimargas. From desembre 2012 to june 2013