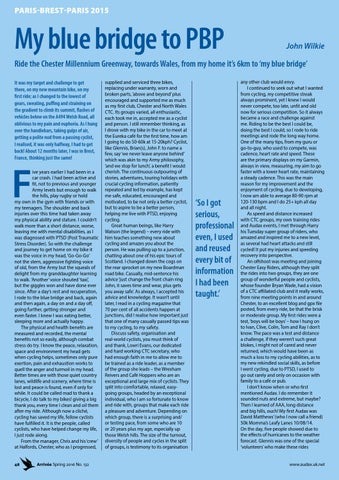 My blue bridge to PBP

Ride the Chester Millennium Greenway, towards Wales, from my home it’s 6km to ‘my blue bridge’ It was my target and challenge to get there, on my new mountain bike, on my first ride; as I changed to the lowest of gears, sweating, puffing and straining on the gradient to climb its summit, flashes of vehicles below on the A494 Welsh Road, all oblivious to my pain and euphoria. As I hung over the handlebars, taking gulps of air, getting a polite nod from a passing cyclist, I realised, it was only halfway, I had to get back! About 12 months later, I was in Brest, France, thinking just the same!

ive years earlier I had been in a car crash. I had been active and fit, not to previous and younger Army levels but enough to walk the hills, play rugby or hold my own in the gym with friends or with my teenagers. The shoulder and back injuries over this time had taken away my physical ability and stature. I couldn’t walk more than a short distance, worse, leaving me with mental disabilities, as I was diagnosed with PTSD (Post Traumatic Stress Disorder). So with the challenge and journey to get home on my bike it was the voice in my head, ‘Go-Go-Go’ not the stern, aggressive fighting voice of old, from the Army but the squeals of delight from my granddaughter learning to walk. ‘Another’ voice shouted ‘taxi’, but the giggles won and have done ever since. After a day’s rest and recuperation, I rode to the blue bridge and back, again and then again, a day on and a day off, going further, getting stronger and even faster. I knew I was eating better, sleeping more and actually happy. The physical and health benefits are measured and recorded, the mental benefits not so easily, although combat stress do try. I know the peace, relaxation, space and environment my head gets when cycling helps, sometimes only pure exertion, pain and exhaustion works to quell the anger and turmoil in my head. Better times are with those quiet country lanes, wildlife and scenery, where time is lost and peace is found, even if only for while. It could be called mad to thank a bicycle, I do talk to my bikes! giving a big thank you, every time I clean and oil them after my ride. Although now a cliché, cycling has saved my life, fellow cyclists have fulfilled it. It is the people, called cyclists, who have helped change my life, I just rode along. From the manager, Chris and his ‘crew’ at Halfords, Chester, who as I progressed,

supplied and serviced three bikes, replacing under warranty, worn and broken parts, ‘above and beyond’ plus encouraged and supported me as much as my first club, Chester and North Wales CTC. Its groups varied, all enthusiastic, each took me in, accepted me as a cyclist and person. I still remember thinking, as I drove with my bike in the car to meet at the Eureka café for the first time, how am I going to do 50-60k at 15-20kph? Cyclist, like Glennis, Brian(s), John F. to name a few, say ‘we never leave anyone behind’ which was akin to my Army philosophy, ‘and we stop for lunch’, a benefit I would cherish. The continuous outpouring of stories, adventures, touring holidays with crucial cycling information, patiently repeated and led by example, has kept me safe, educated, encouraged and motivated, to be not only a better cyclist, but to aspire to be a better person, helping me live with PTSD, enjoying cycling. Great human beings, like Harry Watson (the legend) – every ride with him teaches something new about cycling and amazes you about the person. He was pulling up to a junction, chatting about one of his epic tours of Scotland. I changed down the cogs on the rear sprocket on my new Boardman road bike. Casually, mid-sentence his advice ‘just change the front chain ring John, it saves time and wear, plus gets you away safe’. As always, I accepted his advice and knowledge. It wasn’t until later, I read in a cycling magazine that 70 per cent of all accidents happen at junctions, did I realise how important just that one of many casually passed tips was to my cycling, to my safety. Discuss safety, organisation and real-world cyclists, you must think of and thank, Lowri Evans, our dedicated and hard working CTC secretary, who had enough faith in me to allow me to be trained as a ride leader, as a member of the group she leads – the Wrexham Reivers and Café Hoppers who are an exceptional and large mix of cyclists. They split into comfortable, relaxed, easygoing groups, headed by an exceptional individual, who I am so fortunate to know and ride with, groups that make each ride a pleasure and adventure. Depending on which group, there is a surprising and/ or testing pace, from some who are 10 or 20 years plus my age, especially up those Welsh hills. The size of the turnout, diversity of people and cycles in the split of groups, is testimony to its organisation

‘So I got serious, professional even, I used and reused every bit of information I had been taught.’

any other club would envy. I continued to seek out what I wanted from cycling, my competitive streak always prominent, yet I knew I would never compete, too late, unfit and old now for serious competition. So it always became a race and challenge against me. Riding to be the best I could be, doing the best I could, so I rode to ride meetings and rode the long way home. One of the many tips, from my guru or go-to-guy, who used to compete, was cadence, heart rate and speed. These are the primary displays on my Garmin, always in view, measuring, my aim to go faster with a lower heart rate, maintaining a steady cadence. This was the main reason for my improvement and the enjoyment of cycling, due to developing, I now am able to average 80-90 rpm at 120-130 bpm and I do 25+ kph all day and all night. As speed and distance increased with CTC groups, my own training rides and Audax events, I met through Harry his Tuesday super group of riders, who amazed and inspired me to a new level, as several had heart attacks and still cycled! It put my injuries and speeding recovery into perspective. An offshoot was meeting and joining Chester Easy Riders, although they split the rides into two groups, they are one group of wonderful people and cyclists, whose founder Bryan Wade, had a vision of a CTC affiliated club and it really works, from nine meeting points in and around Chester, to an excellent blog and gpx file posted, from every ride, be that the brisk or moderate group. My first rides were a test, ‘boys will be boys’ – how I hung on to Ivan, Clive, Colin, Tom and Ray I don’t know. The pace was a test and distance a challenge, if they weren’t such great blokes, I might not of cared and never returned, which would have been as much a loss to my cycling abilities, as to my new rekindled social skills, as before I went cycling, due to PTSD, I used to go out rarely and only on occasion with family to a café or pub. I don’t know when or who first mentioned Audax. I do remember it sounded nuts and extreme, but maybe? Then I learned of AAA, long distance and big hills, ouch! My first Audax was David Matthews’ (who I now call a friend) 50k Momma’s Leafy Lanes 10/08/14. On the day, five people showed due to the effects of hurricanes to the weather forecast. Glennis was one of the special ‘volunteers’ who make these rides www.audax.uk.net

Arrivée is the free magazine of Audax United Kingdom, the long distance cyclists’ association, which represents the Randonneurs Mondiaux in the UK. Audax UK membership is open to any cyclist, regardless of club or other affiliation, who is imbued with the spirit of long-distance cycling. www.aukweb.net 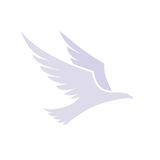