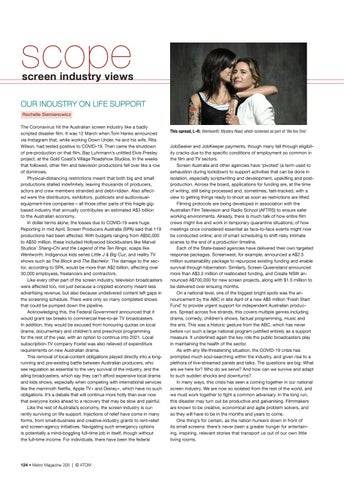 OUR INDUSTRY ON LIFE SUPPORT Rochelle Siemienowicz The Coronavirus hit the Australian screen industry like a badly scripted disaster film. It was 12 March when Tom Hanks announced via Instagram that, while working Down Under, he and his wife, Rita Wilson, had tested positive to COVID-19. Then came the shutdown of pre-production on that film, Baz Luhrmann’s untitled Elvis Presley project, at the Gold Coast’s Village Roadshow Studios. In the weeks that followed, other film and television productions fell over like a row of dominoes. Physical-distancing restrictions meant that both big and small productions stalled indefinitely, leaving thousands of producers, actors and crew members stranded and debt-ridden. Also affect­ ed were the distributors, exhibitors, publicists and audiovisual-­ equipment-hire companies – all those other parts of this fragile gigbased industry that annually contributes an estimated A$3 ­billion to the Australian economy. In dollar terms alone, the losses due to COVID-19 were huge. Reporting in mid April, Screen Producers Australia (SPA) said that 119 productions had been affected. With budgets ranging from A$50,000 to A$50 million, these included Hollywood blockbusters like Marvel Studios’ Shang-Chi and the Legend of the Ten Rings, soaps like Wentworth, Indigenous kids series Little J &amp; Big Cuz, and reality TV shows such as The Block and The Bachelor. The damage to the sector, according to SPA, would be more than A$2 billion, affecting over 30,000 employees, freelancers and contractors. Like every other part of the screen industry, television broadcasters were affected too, not just because a crippled economy meant less advertising revenue, but also because undelivered content left gaps in the screening schedule. There were only so many completed shows that could be pumped down the pipeline. Acknowledging this, the Federal Government announced that it would grant tax breaks to commercial free-to-air TV broadcasters. In addition, they would be excused from honouring quotas on local drama, documentary and children’s and preschool programming for the rest of the year, with an option to continue into 2021. Local subscription-TV company Foxtel was also relieved of expenditure requirements on new Australian drama. This removal of local-content obligations played directly into a longrunning and pre-existing battle between Australian producers, who see regulation as essential to the very survival of the industry, and the ailing broadcasters, which say they can’t afford expensive local drama and kids shows, especially when competing with international services like the mammoth Netflix, Apple TV+ and Disney+, which have no such obligations. It’s a debate that will continue more hotly than ever now that everyone looks ahead to a recovery that may be slow and painful. Like the rest of Australia’s economy, the screen industry is currently surviving on life support. Injections of relief have come in many forms, from small-business and creative-industry grants to rent-relief and screen-agency initiatives. Navigating such emergency options is potentially a mind-boggling full-time job in itself, though without the full-time income. For individuals, there have been the federal

This spread, L–R: Wentworth; Mystery Road, which screened as part of ‘We Are One’

JobSeeker and JobKeeper payments, though many fall through eligibility cracks due to the specific conditions of employment so common in the film and TV sectors. Screen Australia and other agencies have ‘pivoted’ (a term used to exhaustion during lockdown) to support activities that can be done in isolation, especially scriptwriting and development, upskilling and postproduction. Across the board, applications for funding are, at the time of writing, still being processed and, sometimes, fast-tracked, with a view to getting things ready to shoot as soon as restrictions are lifted. Filming protocols are being developed in association with the Australian Film Television and Radio School (AFTRS) to ensure safer working environments. Already, there is much talk of how entire film crews might live and work in temporary quarantine situations; of how meetings once considered essential as face-to-face events might now be conducted online; and of smart scheduling to shift risky intimate scenes to the end of a production timeline. Each of the State-based agencies have delivered their own targeted response packages. Screenwest, for example, announced a A$2.5 million sustainability package to repurpose existing funding and enable survival through hibernation. Similarly, Screen Queensland announced more than A$3.3 million of reallocated funding, and Create NSW announced A$700,000 for new screen projects, along with $1.5 million to be delivered over ensuing months. On a national level, one of the biggest bright spots was the announcement by the ABC in late April of a new A$5 million ‘Fresh Start Fund’ to provide urgent support for independent Australian producers. Spread across five strands, this covers multiple genres including drama, comedy, children’s shows, factual programming, music and the arts. This was a historic gesture from the ABC, which has never before run such a large national program justified entirely as a support measure. It underlined again the key role the public broadcasters play in maintaining the health of the sector. As with any life-threatening situation, the COVID-19 crisis has prompted much soul-searching within the industry, and given rise to a plethora of live-streamed panels and talks. The questions are big: What are we here for? Who do we serve? And how can we survive and adapt to such sudden shocks and downturns? In many ways, this crisis has seen a coming together in our national screen industry. We are now so isolated from the rest of the world, and we must work together to fight a common adversary. In the long run, this disaster may turn out be productive and galvanising. Filmmakers are known to be creative, economical and agile problem solvers, and so they will have to be in the months and years to come. One thing’s for certain, as the nation hunkers down in front of its small screens: there’s never been a greater hunger for entertaining, inspiring, relevant stories that transport us out of our own little living rooms.

From Metro no. 205. Buy or subscribe now at http://www.metromagazine.com.au/magazine/subscribe.asp 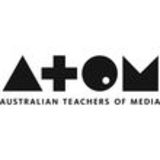