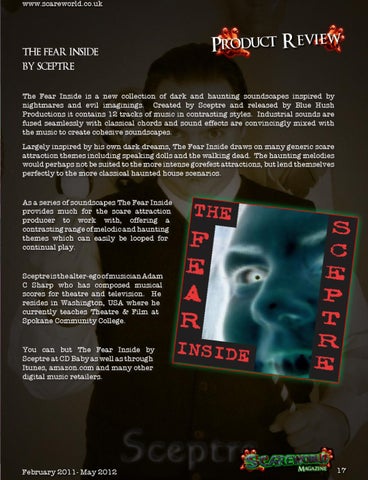 By Sceptre The Fear Inside is a new collection of dark and haunting soundscapes inspired by nightmares and evil imaginings. Created by Sceptre and released by Blue Hush Productions it contains 12 tracks of music in contrasting styles. Industrial sounds are fused seamlessly with classical chords and sound effects are convincingly mixed with the music to create cohesive soundscapes. Largely inspired by his own dark dreams, The Fear Inside draws on many generic scare attraction themes including speaking dolls and the walking dead. The haunting melodies would perhaps not be suited to the more intense gorefest attractions, but lend themselves perfectly to the more classical haunted house scenarios. As a series of soundscapes The Fear Inside provides much for the scare attraction producer to work with, offering a contrasting range of melodic and haunting themes which can easily be looped for continual play. Sceptre is the alter-ego of musician Adam C Sharp who has composed musical scores for theatre and television. He resides in Washington, USA where he currently teaches Theatre & Film at Spokane Community College. You can but The Fear Inside by Sceptre at CD Baby as well as through Itunes, amazon.com and many other digital music retailers. 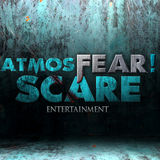 Welcome to the fifth issue of Scareworld - Europe's only dedicated scare entertainment magazine. Since our launch in October 2010 we have un...

Welcome to the fifth issue of Scareworld - Europe's only dedicated scare entertainment magazine. Since our launch in October 2010 we have un...