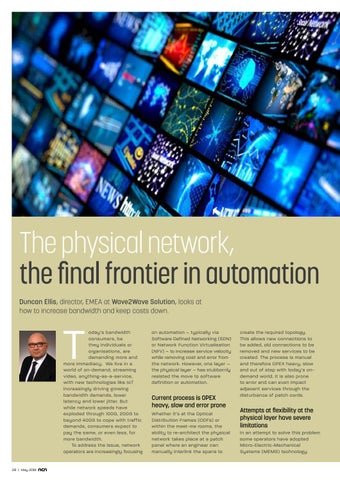 The physical network, the final frontier in automation Duncan Ellis, director, EMEA at Wave2Wave Solution, looks at how to increase bandwidth and keep costs down.

oday’s bandwidth consumers, be they individuals or organisations, are demanding more and more immediacy. We live in a world of on-demand, streaming video, anything-as-a-ser vice, with new technologies like IoT increasingly driving growing bandwidth demands, lower latency and lower jitter. But while network speeds have exploded through 100G, 200G to beyond 400G to cope with traffic demands, consumers expect to pay the same, or even less, for more bandwidth. To address the issue, network operators are increasingly focusing

on automation – typically via Software Defined Networking (SDN) or Network Function Virtualisation (NFV) – to increase service velocity while removing cost and error from the network. However, one layer – the physical layer – has stubbornly resisted the move to software definition or automation.

Current process is OPEX heavy, slow and error prone Whether it’s at the Optical Distribution Frames (ODFs) or within the meet-me rooms, the ability to re-architect the physical network takes place at a patch panel where an engineer can manually interlink the spans to

create the required topology. This allows new connections to be added, old connections to be removed and new services to be created. The process is manual and therefore OPEX heavy, slow and out of step with today’s ondemand world. It is also prone to error and can even impact adjacent services through the disturbance of patch cords.

Attempts at flexibility at the physical layer have severe limitations In an attempt to solve this problem some operators have adopted Micro-Electric-Mechanical Systems (MEMS) technology. 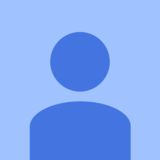