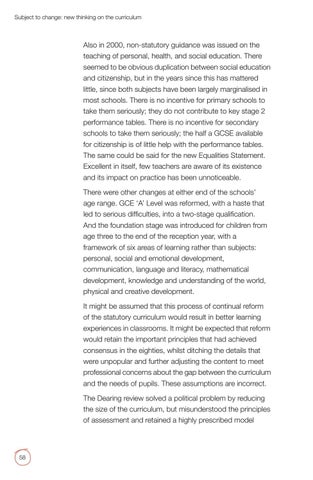 Subject to change: new thinking on the curriculum

Also in 2000, non-statutory guidance was issued on the teaching of personal, health, and social education. There seemed to be obvious duplication between social education and citizenship, but in the years since this has mattered little, since both subjects have been largely marginalised in most schools. There is no incentive for primary schools to take them seriously; they do not contribute to key stage 2 performance tables. There is no incentive for secondary schools to take them seriously; the half a GCSE available for citizenship is of little help with the performance tables. The same could be said for the new Equalities Statement. Excellent in itself, few teachers are aware of its existence and its impact on practice has been unnoticeable. There were other changes at either end of the schools’ age range. GCE ‘A’ Level was reformed, with a haste that led to serious difﬁculties, into a two-stage qualiﬁcation. And the foundation stage was introduced for children from age three to the end of the reception year, with a framework of six areas of learning rather than subjects: personal, social and emotional development, communication, language and literacy, mathematical development, knowledge and understanding of the world, physical and creative development. It might be assumed that this process of continual reform of the statutory curriculum would result in better learning experiences in classrooms. It might be expected that reform would retain the important principles that had achieved consensus in the eighties, whilst ditching the details that were unpopular and further adjusting the content to meet professional concerns about the gap between the curriculum and the needs of pupils. These assumptions are incorrect. The Dearing review solved a political problem by reducing the size of the curriculum, but misunderstood the principles of assessment and retained a highly prescribed model Subject to change new thinking on the curriculum

Subject to change new thinking on the curriculum