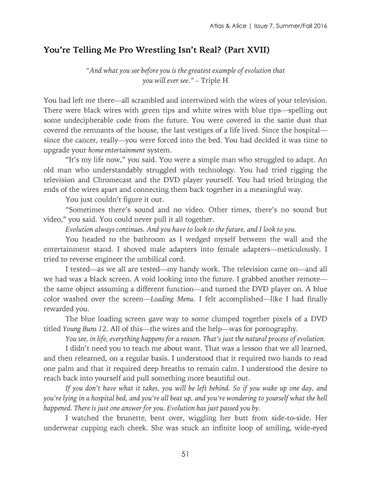 You’re Telling Me Pro Wrestling Isn’t Real? (Part XVII) “And what you see before you is the greatest example of evolution that you will ever see.” – Triple H You had left me there—all scrambled and intertwined with the wires of your television. There were black wires with green tips and white wires with blue tips—spelling out some undecipherable code from the future. You were covered in the same dust that covered the remnants of the house, the last vestiges of a life lived. Since the hospital— since the cancer, really—you were forced into the bed. You had decided it was time to upgrade your home entertainment system. “It’s my life now,” you said. You were a simple man who struggled to adapt. An old man who understandably struggled with technology. You had tried rigging the television and Chromecast and the DVD player yourself. You had tried bringing the ends of the wires apart and connecting them back together in a meaningful way. You just couldn’t figure it out. “Sometimes there’s sound and no video. Other times, there’s no sound but video,” you said. You could never pull it all together. Evolution always continues. And you have to look to the future, and I look to you. You headed to the bathroom as I wedged myself between the wall and the entertainment stand. I shoved male adapters into female adapters—meticulously. I tried to reverse engineer the umbilical cord. I tested—as we all are tested—my handy work. The television came on—and all we had was a black screen. A void looking into the future. I grabbed another remote— the same object assuming a different function—and turned the DVD player on. A blue color washed over the screen—Loading Menu. I felt accomplished—like I had finally rewarded you. The blue loading screen gave way to some clumped together pixels of a DVD titled Young Buns 12. All of this—the wires and the help—was for pornography. You see, in life, everything happens for a reason. That’s just the natural process of evolution. I didn’t need you to teach me about want. That was a lesson that we all learned, and then relearned, on a regular basis. I understood that it required two hands to read one palm and that it required deep breaths to remain calm. I understood the desire to reach back into yourself and pull something more beautiful out. If you don’t have what it takes, you will be left behind. So if you wake up one day, and you’re lying in a hospital bed, and you’re all beat up, and you’re wondering to yourself what the hell happened. There is just one answer for you. Evolution has just passed you by. I watched the brunette, bent over, wiggling her butt from side-to-side. Her underwear cupping each cheek. She was stuck an infinite loop of smiling, wide-eyed 51