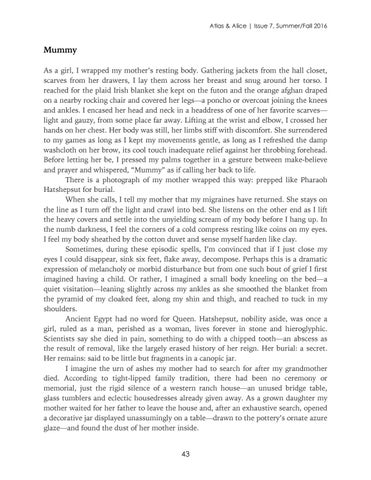 Mummy As a girl, I wrapped my mother’s resting body. Gathering jackets from the hall closet, scarves from her drawers, I lay them across her breast and snug around her torso. I reached for the plaid Irish blanket she kept on the futon and the orange afghan draped on a nearby rocking chair and covered her legs—a poncho or overcoat joining the knees and ankles. I encased her head and neck in a headdress of one of her favorite scarves— light and gauzy, from some place far away. Lifting at the wrist and elbow, I crossed her hands on her chest. Her body was still, her limbs stiff with discomfort. She surrendered to my games as long as I kept my movements gentle, as long as I refreshed the damp washcloth on her brow, its cool touch inadequate relief against her throbbing forehead. Before letting her be, I pressed my palms together in a gesture between make-believe and prayer and whispered, “Mummy” as if calling her back to life. There is a photograph of my mother wrapped this way: prepped like Pharaoh Hatshepsut for burial. When she calls, I tell my mother that my migraines have returned. She stays on the line as I turn off the light and crawl into bed. She listens on the other end as I lift the heavy covers and settle into the unyielding scream of my body before I hang up. In the numb darkness, I feel the corners of a cold compress resting like coins on my eyes. I feel my body sheathed by the cotton duvet and sense myself harden like clay. Sometimes, during these episodic spells, I’m convinced that if I just close my eyes I could disappear, sink six feet, flake away, decompose. Perhaps this is a dramatic expression of melancholy or morbid disturbance but from one such bout of grief I first imagined having a child. Or rather, I imagined a small body kneeling on the bed—a quiet visitation—leaning slightly across my ankles as she smoothed the blanket from the pyramid of my cloaked feet, along my shin and thigh, and reached to tuck in my shoulders. Ancient Egypt had no word for Queen. Hatshepsut, nobility aside, was once a girl, ruled as a man, perished as a woman, lives forever in stone and hieroglyphic. Scientists say she died in pain, something to do with a chipped tooth—an abscess as the result of removal, like the largely erased history of her reign. Her burial: a secret. Her remains: said to be little but fragments in a canopic jar. I imagine the urn of ashes my mother had to search for after my grandmother died. According to tight-lipped family tradition, there had been no ceremony or memorial, just the rigid silence of a western ranch house—an unused bridge table, glass tumblers and eclectic housedresses already given away. As a grown daughter my mother waited for her father to leave the house and, after an exhaustive search, opened a decorative jar displayed unassumingly on a table—drawn to the pottery’s ornate azure glaze—and found the dust of her mother inside. 43