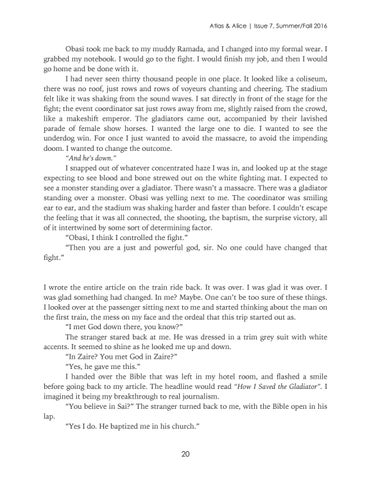 Obasi took me back to my muddy Ramada, and I changed into my formal wear. I grabbed my notebook. I would go to the fight. I would finish my job, and then I would go home and be done with it. I had never seen thirty thousand people in one place. It looked like a coliseum, there was no roof, just rows and rows of voyeurs chanting and cheering. The stadium felt like it was shaking from the sound waves. I sat directly in front of the stage for the fight; the event coordinator sat just rows away from me, slightly raised from the crowd, like a makeshift emperor. The gladiators came out, accompanied by their lavished parade of female show horses. I wanted the large one to die. I wanted to see the underdog win. For once I just wanted to avoid the massacre, to avoid the impending doom. I wanted to change the outcome. “And he’s down.” I snapped out of whatever concentrated haze I was in, and looked up at the stage expecting to see blood and bone strewed out on the white fighting mat. I expected to see a monster standing over a gladiator. There wasn’t a massacre. There was a gladiator standing over a monster. Obasi was yelling next to me. The coordinator was smiling ear to ear, and the stadium was shaking harder and faster than before. I couldn’t escape the feeling that it was all connected, the shooting, the baptism, the surprise victory, all of it intertwined by some sort of determining factor. “Obasi, I think I controlled the fight.” “Then you are a just and powerful god, sir. No one could have changed that fight.”

I wrote the entire article on the train ride back. It was over. I was glad it was over. I was glad something had changed. In me? Maybe. One can’t be too sure of these things. I looked over at the passenger sitting next to me and started thinking about the man on the first train, the mess on my face and the ordeal that this trip started out as. “I met God down there, you know?” The stranger stared back at me. He was dressed in a trim grey suit with white accents. It seemed to shine as he looked me up and down. “In Zaire? You met God in Zaire?” “Yes, he gave me this.” I handed over the Bible that was left in my hotel room, and flashed a smile before going back to my article. The headline would read “How I Saved the Gladiator”. I imagined it being my breakthrough to real journalism. “You believe in Sai?” The stranger turned back to me, with the Bible open in his lap. “Yes I do. He baptized me in his church.”