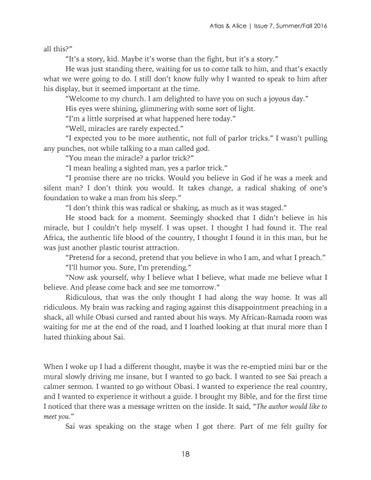 all this?” “It’s a story, kid. Maybe it’s worse than the fight, but it’s a story.” He was just standing there, waiting for us to come talk to him, and that’s exactly what we were going to do. I still don’t know fully why I wanted to speak to him after his display, but it seemed important at the time. “Welcome to my church. I am delighted to have you on such a joyous day.” His eyes were shining, glimmering with some sort of light. “I’m a little surprised at what happened here today.” “Well, miracles are rarely expected.” “I expected you to be more authentic, not full of parlor tricks.” I wasn’t pulling any punches, not while talking to a man called god. “You mean the miracle? a parlor trick?” “I mean healing a sighted man, yes a parlor trick.” “I promise there are no tricks. Would you believe in God if he was a meek and silent man? I don’t think you would. It takes change, a radical shaking of one’s foundation to wake a man from his sleep.” “I don’t think this was radical or shaking, as much as it was staged.” He stood back for a moment. Seemingly shocked that I didn’t believe in his miracle, but I couldn’t help myself. I was upset. I thought I had found it. The real Africa, the authentic life blood of the country, I thought I found it in this man, but he was just another plastic tourist attraction. “Pretend for a second, pretend that you believe in who I am, and what I preach.” “I’ll humor you. Sure, I’m pretending.” “Now ask yourself, why I believe what I believe, what made me believe what I believe. And please come back and see me tomorrow.” Ridiculous, that was the only thought I had along the way home. It was all ridiculous. My brain was racking and raging against this disappointment preaching in a shack, all while Obasi cursed and ranted about his ways. My African-Ramada room was waiting for me at the end of the road, and I loathed looking at that mural more than I hated thinking about Sai.

When I woke up I had a different thought, maybe it was the re-emptied mini bar or the mural slowly driving me insane, but I wanted to go back. I wanted to see Sai preach a calmer sermon. I wanted to go without Obasi. I wanted to experience the real country, and I wanted to experience it without a guide. I brought my Bible, and for the first time I noticed that there was a message written on the inside. It said, “The author would like to meet you.” Sai was speaking on the stage when I got there. Part of me felt guilty for