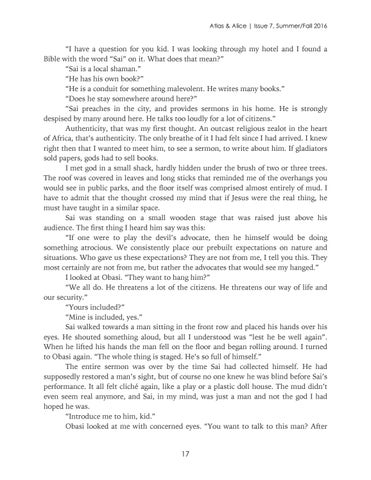 “I have a question for you kid. I was looking through my hotel and I found a Bible with the word “Sai” on it. What does that mean?” “Sai is a local shaman.” “He has his own book?” “He is a conduit for something malevolent. He writes many books.” “Does he stay somewhere around here?” “Sai preaches in the city, and provides sermons in his home. He is strongly despised by many around here. He talks too loudly for a lot of citizens.” Authenticity, that was my first thought. An outcast religious zealot in the heart of Africa, that’s authenticity. The only breathe of it I had felt since I had arrived. I knew right then that I wanted to meet him, to see a sermon, to write about him. If gladiators sold papers, gods had to sell books. I met god in a small shack, hardly hidden under the brush of two or three trees. The roof was covered in leaves and long sticks that reminded me of the overhangs you would see in public parks, and the floor itself was comprised almost entirely of mud. I have to admit that the thought crossed my mind that if Jesus were the real thing, he must have taught in a similar space. Sai was standing on a small wooden stage that was raised just above his audience. The first thing I heard him say was this: “If one were to play the devil’s advocate, then he himself would be doing something atrocious. We consistently place our prebuilt expectations on nature and situations. Who gave us these expectations? They are not from me, I tell you this. They most certainly are not from me, but rather the advocates that would see my hanged.” I looked at Obasi. “They want to hang him?” “We all do. He threatens a lot of the citizens. He threatens our way of life and our security.” “Yours included?” “Mine is included, yes.” Sai walked towards a man sitting in the front row and placed his hands over his eyes. He shouted something aloud, but all I understood was “lest he be well again”. When he lifted his hands the man fell on the floor and began rolling around. I turned to Obasi again. “The whole thing is staged. He’s so full of himself.” The entire sermon was over by the time Sai had collected himself. He had supposedly restored a man’s sight, but of course no one knew he was blind before Sai’s performance. It all felt cliché again, like a play or a plastic doll house. The mud didn’t even seem real anymore, and Sai, in my mind, was just a man and not the god I had hoped he was. “Introduce me to him, kid.” Obasi looked at me with concerned eyes. “You want to talk to this man? After