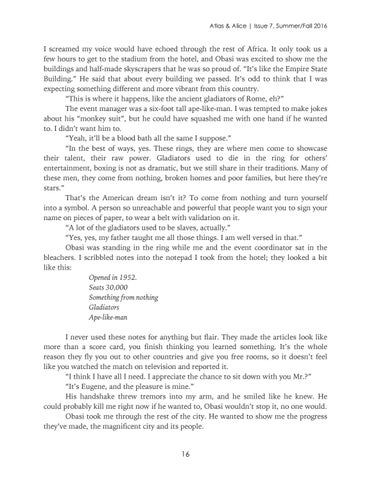 I screamed my voice would have echoed through the rest of Africa. It only took us a few hours to get to the stadium from the hotel, and Obasi was excited to show me the buildings and half-made skyscrapers that he was so proud of. “It’s like the Empire State Building.” He said that about every building we passed. It’s odd to think that I was expecting something different and more vibrant from this country. “This is where it happens, like the ancient gladiators of Rome, eh?” The event manager was a six-foot tall ape-like-man. I was tempted to make jokes about his “monkey suit”, but he could have squashed me with one hand if he wanted to. I didn’t want him to. “Yeah, it’ll be a blood bath all the same I suppose.” “In the best of ways, yes. These rings, they are where men come to showcase their talent, their raw power. Gladiators used to die in the ring for others’ entertainment, boxing is not as dramatic, but we still share in their traditions. Many of these men, they come from nothing, broken homes and poor families, but here they’re stars.” That’s the American dream isn’t it? To come from nothing and turn yourself into a symbol. A person so unreachable and powerful that people want you to sign your name on pieces of paper, to wear a belt with validation on it. “A lot of the gladiators used to be slaves, actually.” “Yes, yes, my father taught me all those things. I am well versed in that.” Obasi was standing in the ring while me and the event coordinator sat in the bleachers. I scribbled notes into the notepad I took from the hotel; they looked a bit like this: Opened in 1952. Seats 30,000 Something from nothing Gladiators Ape-like-man I never used these notes for anything but flair. They made the articles look like more than a score card, you finish thinking you learned something. It’s the whole reason they fly you out to other countries and give you free rooms, so it doesn’t feel like you watched the match on television and reported it. “I think I have all I need. I appreciate the chance to sit down with you Mr.?” “It’s Eugene, and the pleasure is mine.” His handshake threw tremors into my arm, and he smiled like he knew. He could probably kill me right now if he wanted to, Obasi wouldn’t stop it, no one would. Obasi took me through the rest of the city. He wanted to show me the progress they’ve made, the magnificent city and its people.