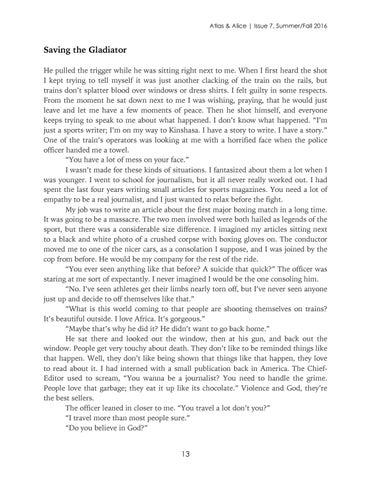 Saving the Gladiator He pulled the trigger while he was sitting right next to me. When I first heard the shot I kept trying to tell myself it was just another clacking of the train on the rails, but trains don’t splatter blood over windows or dress shirts. I felt guilty in some respects. From the moment he sat down next to me I was wishing, praying, that he would just leave and let me have a few moments of peace. Then he shot himself, and everyone keeps trying to speak to me about what happened. I don’t know what happened. “I’m just a sports writer; I’m on my way to Kinshasa. I have a story to write. I have a story.” One of the train’s operators was looking at me with a horrified face when the police officer handed me a towel. “You have a lot of mess on your face.” I wasn’t made for these kinds of situations. I fantasized about them a lot when I was younger. I went to school for journalism, but it all never really worked out. I had spent the last four years writing small articles for sports magazines. You need a lot of empathy to be a real journalist, and I just wanted to relax before the fight. My job was to write an article about the first major boxing match in a long time. It was going to be a massacre. The two men involved were both hailed as legends of the sport, but there was a considerable size difference. I imagined my articles sitting next to a black and white photo of a crushed corpse with boxing gloves on. The conductor moved me to one of the nicer cars, as a consolation I suppose, and I was joined by the cop from before. He would be my company for the rest of the ride. “You ever seen anything like that before? A suicide that quick?” The officer was staring at me sort of expectantly. I never imagined I would be the one consoling him. “No. I’ve seen athletes get their limbs nearly torn off, but I’ve never seen anyone just up and decide to off themselves like that.” “What is this world coming to that people are shooting themselves on trains? It’s beautiful outside. I love Africa. It’s gorgeous.” “Maybe that’s why he did it? He didn’t want to go back home.” He sat there and looked out the window, then at his gun, and back out the window. People get very touchy about death. They don’t like to be reminded things like that happen. Well, they don’t like being shown that things like that happen, they love to read about it. I had interned with a small publication back in America. The ChiefEditor used to scream, “You wanna be a journalist? You need to handle the grime. People love that garbage; they eat it up like its chocolate.” Violence and God, they’re the best sellers. The officer leaned in closer to me. “You travel a lot don’t you?” “I travel more than most people sure.” “Do you believe in God?” 13