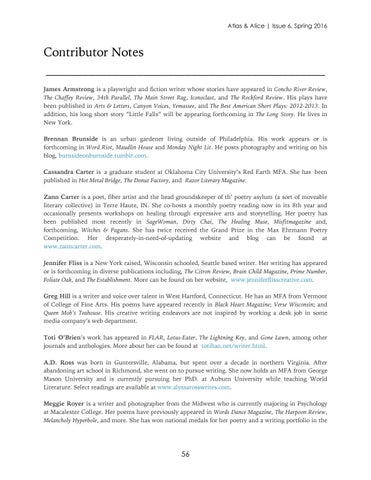 Contributor Notes ______________________________________________ James Armstrong is a playwright and fiction writer whose stories have appeared in Concho River Review, The Chaffey Review, 34th Parallel, The Main Street Rag, Iconoclast, and The Rockford Review. His plays have been published in Arts &amp; Letters, Canyon Voices, Yemassee, and The Best American Short Plays: 2012-2013. In addition, his long short story “Little Falls” will be appearing forthcoming in The Long Story. He lives in New York. Brennan Brunside is an urban gardener living outside of Philadelphia. His work appears or is forthcoming in Word Riot, Maudlin House and Monday Night Lit. He posts photography and writing on his blog, burnsideonburnside.tumblr.com. Cassandra Carter is a graduate student at Oklahoma City University’s Red Earth MFA. She has been published in Hot Metal Bridge, The Donut Factory, and Razor Literary Magazine. Zann Carter is a poet, fiber artist and the head groundskeeper of th’ poetry asylum (a sort of moveable literary collective) in Terre Haute, IN. She co-hosts a monthly poetry reading now in its 8th year and occasionally presents workshops on healing through expressive arts and storytelling. Her poetry has been published most recently in SageWoman, Dirty Chai, The Healing Muse, Misfitmagazine and, forthcoming, Witches &amp; Pagans. She has twice received the Grand Prize in the Max Ehrmann Poetry Competition. Her desperately-in-need-of-updating website and blog can be found at www.zanncarter.com. Jennifer Fliss is a New York raised, Wisconsin schooled, Seattle based writer. Her writing has appeared or is forthcoming in diverse publications including, The Citron Review, Brain Child Magazine, Prime Number, Foliate Oak, and The Establishment. More can be found on her website, www.jenniferflisscreative.com. Greg Hill is a writer and voice over talent in West Hartford, Connecticut. He has an MFA from Vermont of College of Fine Arts. His poems have appeared recently in Black Heart Magazine; Verse Wisconsin; and Queen Mob’s Teahouse. His creative writing endeavors are not inspired by working a desk job in some media company’s web department. Toti O’Brien’s work has appeared in FLAR, Lotus-Eater, The Lightning Key, and Gone Lawn, among other journals and anthologies. More about her can be found at totihan.net/writer.html. A.D. Ross was born in Guntersville, Alabama, but spent over a decade in northern Virginia. After abandoning art school in Richmond, she went on to pursue writing. She now holds an MFA from George Mason University and is currently pursuing her PhD. at Auburn University while teaching World Literature. Select readings are available at www.alyssarosswrites.com. Meggie Royer is a writer and photographer from the Midwest who is currently majoring in Psychology at Macalester College. Her poems have previously appeared in Words Dance Magazine, The Harpoon Review, Melancholy Hyperbole, and more. She has won national medals for her poetry and a writing portfolio in the