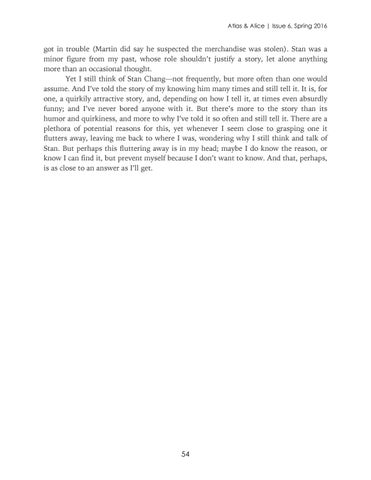 got in trouble (Martin did say he suspected the merchandise was stolen). Stan was a minor figure from my past, whose role shouldn’t justify a story, let alone anything more than an occasional thought. Yet I still think of Stan Chang—not frequently, but more often than one would assume. And I’ve told the story of my knowing him many times and still tell it. It is, for one, a quirkily attractive story, and, depending on how I tell it, at times even absurdly funny; and I’ve never bored anyone with it. But there’s more to the story than its humor and quirkiness, and more to why I’ve told it so often and still tell it. There are a plethora of potential reasons for this, yet whenever I seem close to grasping one it flutters away, leaving me back to where I was, wondering why I still think and talk of Stan. But perhaps this fluttering away is in my head; maybe I do know the reason, or know I can find it, but prevent myself because I don’t want to know. And that, perhaps, is as close to an answer as I’ll get.