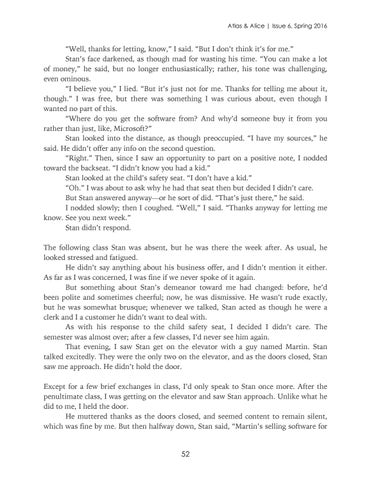 “Well, thanks for letting, know,” I said. “But I don’t think it’s for me.” Stan’s face darkened, as though mad for wasting his time. “You can make a lot of money,” he said, but no longer enthusiastically; rather, his tone was challenging, even ominous. “I believe you,” I lied. “But it’s just not for me. Thanks for telling me about it, though.” I was free, but there was something I was curious about, even though I wanted no part of this. “Where do you get the software from? And why’d someone buy it from you rather than just, like, Microsoft?” Stan looked into the distance, as though preoccupied. “I have my sources,” he said. He didn’t offer any info on the second question. “Right.” Then, since I saw an opportunity to part on a positive note, I nodded toward the backseat. “I didn’t know you had a kid.” Stan looked at the child’s safety seat. “I don’t have a kid.” “Oh.” I was about to ask why he had that seat then but decided I didn’t care. But Stan answered anyway—or he sort of did. “That’s just there,” he said. I nodded slowly; then I coughed. “Well,” I said. “Thanks anyway for letting me know. See you next week.” Stan didn’t respond. The following class Stan was absent, but he was there the week after. As usual, he looked stressed and fatigued. He didn’t say anything about his business offer, and I didn’t mention it either. As far as I was concerned, I was fine if we never spoke of it again. But something about Stan’s demeanor toward me had changed: before, he’d been polite and sometimes cheerful; now, he was dismissive. He wasn’t rude exactly, but he was somewhat brusque; whenever we talked, Stan acted as though he were a clerk and I a customer he didn’t want to deal with. As with his response to the child safety seat, I decided I didn’t care. The semester was almost over; after a few classes, I’d never see him again. That evening, I saw Stan get on the elevator with a guy named Martin. Stan talked excitedly. They were the only two on the elevator, and as the doors closed, Stan saw me approach. He didn’t hold the door. Except for a few brief exchanges in class, I’d only speak to Stan once more. After the penultimate class, I was getting on the elevator and saw Stan approach. Unlike what he did to me, I held the door. He muttered thanks as the doors closed, and seemed content to remain silent, which was fine by me. But then halfway down, Stan said, “Martin’s selling software for