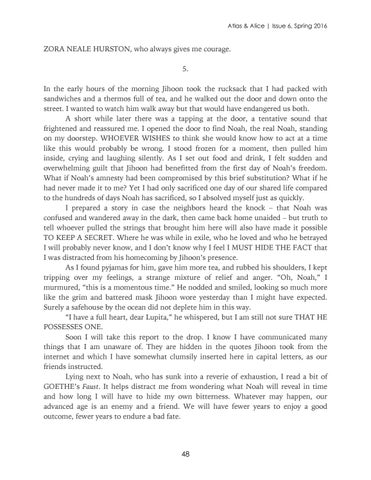 ZORA NEALE HURSTON, who always gives me courage. . 5. In the early hours of the morning Jihoon took the rucksack that I had packed with sandwiches and a thermos full of tea, and he walked out the door and down onto the street. I wanted to watch him walk away but that would have endangered us both. A short while later there was a tapping at the door, a tentative sound that frightened and reassured me. I opened the door to find Noah, the real Noah, standing on my doorstep. WHOEVER WISHES to think she would know how to act at a time like this would probably be wrong. I stood frozen for a moment, then pulled him inside, crying and laughing silently. As I set out food and drink, I felt sudden and overwhelming guilt that Jihoon had benefitted from the first day of Noah’s freedom. What if Noah’s amnesty had been compromised by this brief substitution? What if he had never made it to me? Yet I had only sacrificed one day of our shared life compared to the hundreds of days Noah has sacrificed, so I absolved myself just as quickly. I prepared a story in case the neighbors heard the knock – that Noah was confused and wandered away in the dark, then came back home unaided – but truth to tell whoever pulled the strings that brought him here will also have made it possible TO KEEP A SECRET. Where he was while in exile, who he loved and who he betrayed I will probably never know, and I don’t know why I feel I MUST HIDE THE FACT that I was distracted from his homecoming by Jihoon’s presence. As I found pyjamas for him, gave him more tea, and rubbed his shoulders, I kept tripping over my feelings, a strange mixture of relief and anger. “Oh, Noah,” I murmured, “this is a momentous time.” He nodded and smiled, looking so much more like the grim and battered mask Jihoon wore yesterday than I might have expected. Surely a safehouse by the ocean did not deplete him in this way. “I have a full heart, dear Lupita,” he whispered, but I am still not sure THAT HE POSSESSES ONE. Soon I will take this report to the drop. I know I have communicated many things that I am unaware of. They are hidden in the quotes Jihoon took from the internet and which I have somewhat clumsily inserted here in capital letters, as our friends instructed. Lying next to Noah, who has sunk into a reverie of exhaustion, I read a bit of GOETHE’s Faust. It helps distract me from wondering what Noah will reveal in time and how long I will have to hide my own bitterness. Whatever may happen, our advanced age is an enemy and a friend. We will have fewer years to enjoy a good outcome, fewer years to endure a bad fate.