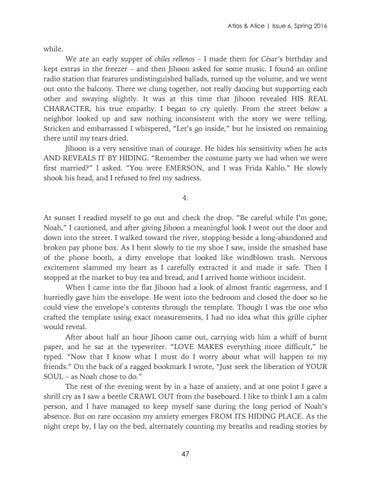 We ate an early supper of chiles rellenos – I made them for César’s birthday and kept extras in the freezer – and then Jihoon asked for some music. I found an online radio station that features undistinguished ballads, turned up the volume, and we went out onto the balcony. There we clung together, not really dancing but supporting each other and swaying slightly. It was at this time that Jihoon revealed HIS REAL CHARACTER, his true empathy. I began to cry quietly. From the street below a neighbor looked up and saw nothing inconsistent with the story we were telling. Stricken and embarrassed I whispered, “Let’s go inside,” but he insisted on remaining there until my tears dried. Jihoon is a very sensitive man of courage. He hides his sensitivity when he acts AND REVEALS IT BY HIDING. “Remember the costume party we had when we were first married?” I asked. “You were EMERSON, and I was Frida Kahlo.” He slowly shook his head, and I refused to feel my sadness. . 4. At sunset I readied myself to go out and check the drop. “Be careful while I’m gone, Noah,” I cautioned, and after giving Jihoon a meaningful look I went out the door and down into the street. I walked toward the river, stopping beside a long-abandoned and broken pay phone box. As I bent slowly to tie my shoe I saw, inside the smashed base of the phone booth, a dirty envelope that looked like windblown trash. Nervous excitement slammed my heart as I carefully extracted it and made it safe. Then I stopped at the market to buy tea and bread, and I arrived home without incident. When I came into the flat Jihoon had a look of almost frantic eagerness, and I hurriedly gave him the envelope. He went into the bedroom and closed the door so he could view the envelope’s contents through the template. Though I was the one who crafted the template using exact measurements, I had no idea what this grille cipher would reveal. After about half an hour Jihoon came out, carrying with him a whiff of burnt paper, and he sat at the typewriter. “LOVE MAKES everything more difficult,” he typed. “Now that I know what I must do I worry about what will happen to my friends.” On the back of a ragged bookmark I wrote, “Just seek the liberation of YOUR SOUL – as Noah chose to do.” The rest of the evening went by in a haze of anxiety, and at one point I gave a shrill cry as I saw a beetle CRAWL OUT from the baseboard. I like to think I am a calm person, and I have managed to keep myself sane during the long period of Noah’s absence. But on rare occasion my anxiety emerges FROM ITS HIDING PLACE. As the night crept by, I lay on the bed, alternately counting my breaths and reading stories by