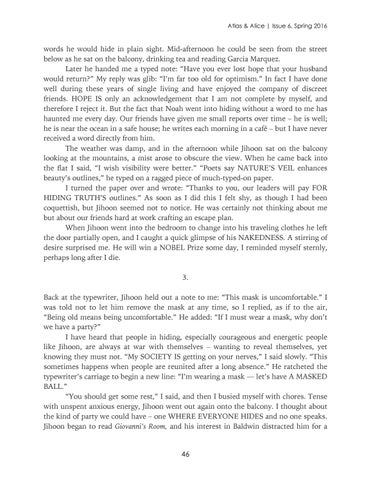 words he would hide in plain sight. Mid-afternoon he could be seen from the street below as he sat on the balcony, drinking tea and reading Garcia Marquez. Later he handed me a typed note: “Have you ever lost hope that your husband would return?” My reply was glib: “I’m far too old for optimism.” In fact I have done well during these years of single living and have enjoyed the company of discreet friends. HOPE IS only an acknowledgement that I am not complete by myself, and therefore I reject it. But the fact that Noah went into hiding without a word to me has haunted me every day. Our friends have given me small reports over time – he is well; he is near the ocean in a safe house; he writes each morning in a café – but I have never received a word directly from him. The weather was damp, and in the afternoon while Jihoon sat on the balcony looking at the mountains, a mist arose to obscure the view. When he came back into the flat I said, “I wish visibility were better.” “Poets say NATURE’S VEIL enhances beauty’s outlines,” he typed on a ragged piece of much-typed-on paper. I turned the paper over and wrote: “Thanks to you, our leaders will pay FOR HIDING TRUTH’S outlines.” As soon as I did this I felt shy, as though I had been coquettish, but Jihoon seemed not to notice. He was certainly not thinking about me but about our friends hard at work crafting an escape plan. When Jihoon went into the bedroom to change into his traveling clothes he left the door partially open, and I caught a quick glimpse of his NAKEDNESS. A stirring of desire surprised me. He will win a NOBEL Prize some day, I reminded myself sternly, perhaps long after I die. . 3. Back at the typewriter, Jihoon held out a note to me: “This mask is uncomfortable.” I was told not to let him remove the mask at any time, so I replied, as if to the air, “Being old means being uncomfortable.” He added: “If I must wear a mask, why don’t we have a party?” I have heard that people in hiding, especially courageous and energetic people like Jihoon, are always at war with themselves – wanting to reveal themselves, yet knowing they must not. “My SOCIETY IS getting on your nerves,” I said slowly. “This sometimes happens when people are reunited after a long absence.” He ratcheted the typewriter’s carriage to begin a new line: “I’m wearing a mask — let’s have A MASKED BALL.” “You should get some rest,” I said, and then I busied myself with chores. Tense with unspent anxious energy, Jihoon went out again onto the balcony. I thought about the kind of party we could have – one WHERE EVERYONE HIDES and no one speaks. Jihoon began to read Giovanni’s Room, and his interest in Baldwin distracted him for a