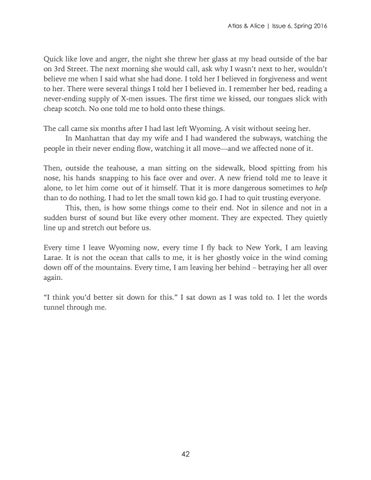 Quick like love and anger, the night she threw her glass at my head outside of the bar on 3rd Street. The next morning she would call, ask why I wasn’t next to her, wouldn’t believe me when I said what she had done. I told her I believed in forgiveness and went to her. There were several things I told her I believed in. I remember her bed, reading a never-ending supply of X-men issues. The first time we kissed, our tongues slick with cheap scotch. No one told me to hold onto these things. The call came six months after I had last left Wyoming. A visit without seeing her. In Manhattan that day my wife and I had wandered the subways, watching the people in their never ending flow, watching it all move—and we affected none of it. . Then, outside the teahouse, a man sitting on the sidewalk, blood spitting from his nose, his hands snapping to his face over and over. A new friend told me to leave it alone, to let him come out of it himself. That it is more dangerous sometimes to help than to do nothing. I had to let the small town kid go. I had to quit trusting everyone. This, then, is how some things come to their end. Not in silence and not in a sudden burst of sound but like every other moment. They are expected. They quietly line up and stretch out before us. Every time I leave Wyoming now, every time I fly back to New York, I am leaving Larae. It is not the ocean that calls to me, it is her ghostly voice in the wind coming down off of the mountains. Every time, I am leaving her behind – betraying her all over again. “I think you’d better sit down for this.” I sat down as I was told to. I let the words tunnel through me.