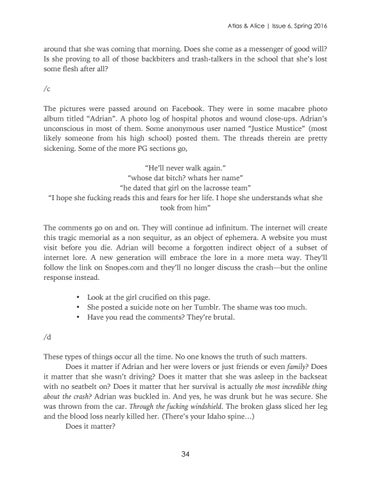 around that she was coming that morning. Does she come as a messenger of good will? Is she proving to all of those backbiters and trash-talkers in the school that she’s lost some flesh after all? /c The pictures were passed around on Facebook. They were in some macabre photo album titled “Adrian”. A photo log of hospital photos and wound close-ups. Adrian’s unconscious in most of them. Some anonymous user named “Justice Mustice” (most likely someone from his high school) posted them. The threads therein are pretty sickening. Some of the more PG sections go, “He’ll never walk again.” “whose dat bitch? whats her name” “he dated that girl on the lacrosse team” “I hope she fucking reads this and fears for her life. I hope she understands what she took from him” The comments go on and on. They will continue ad infinitum. The internet will create this tragic memorial as a non sequitur, as an object of ephemera. A website you must visit before you die. Adrian will become a forgotten indirect object of a subset of internet lore. A new generation will embrace the lore in a more meta way. They’ll follow the link on Snopes.com and they’ll no longer discuss the crash—but the online response instead. • • •

Look at the girl crucified on this page. She posted a suicide note on her Tumblr. The shame was too much. Have you read the comments? They’re brutal.