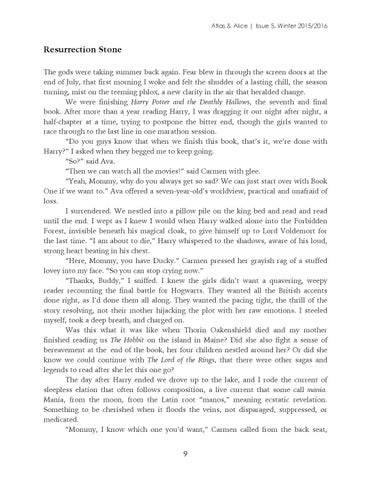 Resurrection Stone The gods were taking summer back again. Fear blew in through the screen doors at the end of July, that first morning I woke and felt the shudder of a lasting chill, the season turning, mist on the teeming phlox, a new clarity in the air that heralded change. We were finishing Harry Potter and the Deathly Hallows, the seventh and final book. After more than a year reading Harry, I was dragging it out night after night, a half-chapter at a time, trying to postpone the bitter end, though the girls wanted to race through to the last line in one marathon session. “Do you guys know that when we finish this book, that’s it, we’re done with Harry?” I asked when they begged me to keep going. “So?” said Ava. “Then we can watch all the movies!” said Carmen with glee. “Yeah, Mommy, why do you always get so sad? We can just start over with Book One if we want to.” Ava offered a seven-year-old’s worldview, practical and unafraid of loss. I surrendered. We nestled into a pillow pile on the king bed and read and read until the end. I wept as I knew I would when Harry walked alone into the Forbidden Forest, invisible beneath his magical cloak, to give himself up to Lord Voldemort for the last time. “I am about to die,” Harry whispered to the shadows, aware of his loud, strong heart beating in his chest. “Here, Mommy, you have Ducky.” Carmen pressed her grayish rag of a stuffed lovey into my face. “So you can stop crying now.” “Thanks, Buddy,” I sniffed. I knew the girls didn’t want a quavering, weepy reader recounting the final battle for Hogwarts. They wanted all the British accents done right, as I’d done them all along. They wanted the pacing tight, the thrill of the story resolving, not their mother hijacking the plot with her raw emotions. I steeled myself, took a deep breath, and charged on. Was this what it was like when Thorin Oakenshield died and my mother finished reading us The Hobbit on the island in Maine? Did she also fight a sense of bereavement at the end of the book, her four children nestled around her? Or did she know we could continue with The Lord of the Rings, that there were other sagas and legends to read after she let this one go? The day after Harry ended we drove up to the lake, and I rode the current of sleepless elation that often follows composition, a live current that some call mania. Mania, from the moon, from the Latin root “manos,” meaning ecstatic revelation. Something to be cherished when it floods the veins, not disparaged, suppressed, or medicated. “Mommy, I know which one you’d want,” Carmen called from the back seat, 9