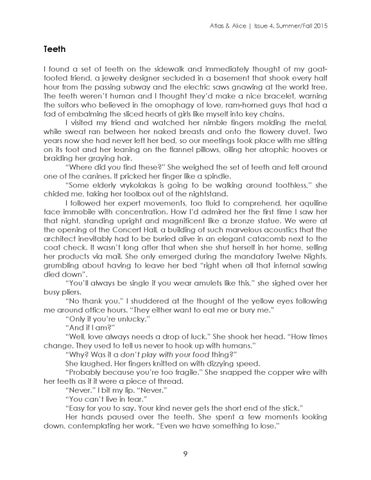 Teeth I found a set of teeth on the sidewalk and immediately thought of my goatfooted friend, a jewelry designer secluded in a basement that shook every half hour from the passing subway and the electric saws gnawing at the world tree. The teeth weren’t human and I thought they’d make a nice bracelet, warning the suitors who believed in the omophagy of love, ram-horned guys that had a fad of embalming the sliced hearts of girls like myself into key chains. I visited my friend and watched her nimble fingers molding the metal, while sweat ran between her naked breasts and onto the flowery duvet. Two years now she had never left her bed, so our meetings took place with me sitting on its foot and her leaning on the flannel pillows, oiling her atrophic hooves or braiding her graying hair. “Where did you find these?” She weighed the set of teeth and felt around one of the canines. It pricked her finger like a spindle. “Some elderly vrykolakas is going to be walking around toothless,” she chided me, taking her toolbox out of the nightstand. I followed her expert movements, too fluid to comprehend, her aquiline face immobile with concentration. How I’d admired her the first time I saw her that night, standing upright and magnificent like a bronze statue. We were at the opening of the Concert Hall, a building of such marvelous acoustics that the architect inevitably had to be buried alive in an elegant catacomb next to the coat check. It wasn’t long after that when she shut herself in her home, selling her products via mail. She only emerged during the mandatory Twelve Nights, grumbling about having to leave her bed “right when all that infernal sawing died down”. “You’ll always be single if you wear amulets like this,” she sighed over her busy pliers. “No thank you.” I shuddered at the thought of the yellow eyes following me around office hours. “They either want to eat me or bury me.” “Only if you’re unlucky.” “And if I am?” “Well, love always needs a drop of luck.” She shook her head. “How times change. They used to tell us never to hook up with humans.” “Why? Was it a don’t play with your food thing?” She laughed. Her fingers knitted on with dizzying speed. “Probably because you’re too fragile.” She snapped the copper wire with her teeth as if it were a piece of thread. “Never.” I bit my lip. “Never.” “You can’t live in fear.” “Easy for you to say. Your kind never gets the short end of the stick.” Her hands paused over the teeth. She spent a few moments looking down, contemplating her work. “Even we have something to lose.”