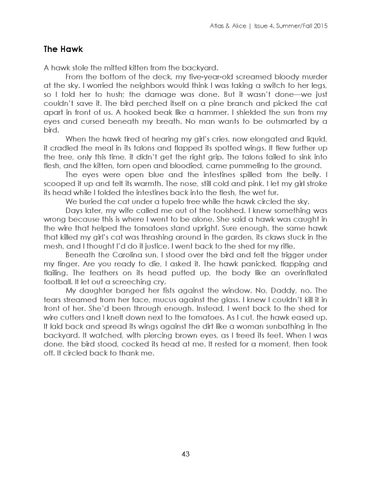 The Hawk A hawk stole the mitted kitten from the backyard. From the bottom of the deck, my five-year-old screamed bloody murder at the sky. I worried the neighbors would think I was taking a switch to her legs, so I told her to hush; the damage was done. But it wasn’t done—we just couldn’t save it. The bird perched itself on a pine branch and picked the cat apart in front of us. A hooked beak like a hammer. I shielded the sun from my eyes and cursed beneath my breath. No man wants to be outsmarted by a bird. When the hawk tired of hearing my girl’s cries, now elongated and liquid, it cradled the meal in its talons and flapped its spotted wings. It flew further up the tree, only this time, it didn’t get the right grip. The talons failed to sink into flesh, and the kitten, torn open and bloodied, came pummeling to the ground. The eyes were open blue and the intestines spilled from the belly. I scooped it up and felt its warmth. The nose, still cold and pink. I let my girl stroke its head while I folded the intestines back into the flesh, the wet fur. We buried the cat under a tupelo tree while the hawk circled the sky. Days later, my wife called me out of the toolshed. I knew something was wrong because this is where I went to be alone. She said a hawk was caught in the wire that helped the tomatoes stand upright. Sure enough, the same hawk that killed my girl’s cat was thrashing around in the garden, its claws stuck in the mesh, and I thought I’d do it justice. I went back to the shed for my rifle. Beneath the Carolina sun, I stood over the bird and felt the trigger under my finger. Are you ready to die, I asked it. The hawk panicked, flapping and flailing. The feathers on its head puffed up, the body like an overinflated football. It let out a screeching cry. My daughter banged her fists against the window. No, Daddy, no. The tears streamed from her face, mucus against the glass. I knew I couldn’t kill it in front of her. She’d been through enough. Instead, I went back to the shed for wire cutters and I knelt down next to the tomatoes. As I cut, the hawk eased up. It laid back and spread its wings against the dirt like a woman sunbathing in the backyard. It watched, with piercing brown eyes, as I freed its feet. When I was done, the bird stood, cocked its head at me. It rested for a moment, then took off. It circled back to thank me.